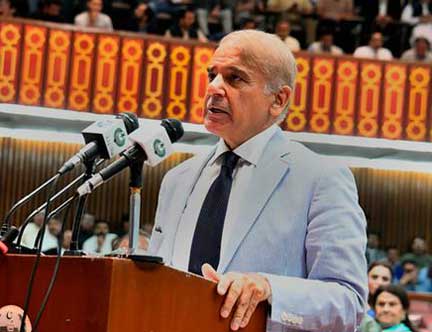 Things don’t seem to be going too well for Pakistan. While the country’s financial condition continues to worsen with each passing day, with former Prime Minister Imran Khan declaring ‘jihad’ [holy war] to save the country from the allegedly “imported” Shehbaz Sharif led government, the political situation has turned extremely volatile. While Federal Minister for Planning, Development and Special Initiatives Ahsan Iqbal is accusing Khan of “using tools of hybrid warfare against Pakistan,” Prime Minister Shebaz is sanguine that “Imran Niazi wants civil war.”

Declaring that “dropping an atomic bomb [on Pakistan] would have been better than handing over the helm to the thieves [the current government],” the former Prime Minister has even gone to the extent of openly blaming Pakistan army for the country’s burgeoning financial crisis by tweeting- “Both myself and Shaukat Tarin had warned the ‘neutrals’ [a reference to Pakistan army] that if [the] conspiracy [to oust him] succeeded, our fragile economic recovery would go into a tailspin.”

Despite Rawalpindi’s brutal crackdown and unending scourge of targeted killings and enforced disappearances in Balochistan, the determined Baloch fighters are giving Pakistan army no respite, and now even their women folk have joined the ongoing freedom struggle. To make matters worse, the mighty Pakistan has failed to rein-in Tehreek-e-Taliban Pakistan [TTP], and has been forced by this terrorist group to accept a ceasefire, release captured TTP fighters and negotiate. TTP is responsible for the ghastly 2014 Army Public School Peshawar carnage in which more than 130 students lost their lives. This terrorist group is also responsible for killing hundreds of Pakistani security force personnel, makes Rawalpindi’s abject capitulation to a terrorist group all the more nauseating.

With an unprecedented wave of criticism engulfing Rawalpindi, the Director General [DG] of Pakistan army’s media wing Inter Services Public Relations [ISPR] has been working overtime in a damage control mode. DGISPR started on a high note, complete with Rawalpindi’s characteristic arrogance, by a veiled threat that “Unfounded misconduct against the Armed Forces of Pakistan and its leadership is by no means acceptable.” However, when the former Prime Minister exposed the army’s white of having “nothing to do with politics” by revealing that”The establishment [army] gave me three options,” DGISPR’s tone and tenor became more subdued and at times, even apologetic.

Trying to assuage public apprehensions, he not only announced that current army chief Gen Qamar Javed Bajwa would not seek further extension, but also clarified that “There will never be martial law in Pakistan” and ended with a meek “Do not drag the army into political matters” request! In a bid to gain public sympathy, DGISPR also unsuccessfully used Rawalpindi’s common stock excuse about “An organised malicious propaganda is being run against the Pakistan Army and its leadership”!

So, the former cricketer turned politician’s recent barb directed at Gen Bajwa reminding him that “you said you are neutral, so now remain neutral,” couldn’t have come at a more inappropriate time. With the way Khan has been spewing vitriol and inciting the youth, the probability of violence erupting during the impending long march planned by Pakistan Tehreek-e-Insaf [PTI] is very high. Should things go out of the hands of law enforcement agencies, the army may have to be requisitioned and, in this eventuality, Rawalpindi will need to tread very cautiously in order to ‘prove’ its avowed neutrality.

It’s strange how things change so soon. In September last year, Khan gave Rawalpindi a thumping report by saying, “We have an excellent relationship [Pakistan army]. I honestly think it is the most harmonious relationship. We have complete coordination, we work together, the military completely stands by all the democratic government’s policies whether it is with India, whether it is for [a] peaceful solution in Afghanistan…everywhere the military stands by us.” This bonhomie was evident as late as just five months ago when Khan boasted how “civil-military relations [in Pakistan] are unprecedented these days.”

So, if the Pakistan army is today being pilloried by the public for meddling in domestic politics, then it has no one but itself to blame. The era of military coups may have ended, but Rawalpindi never loosened its grip on the country’s politics. In 2020, while addressing the first public rally of the Pakistan Democratic Movement (PDM), former Prime Minister Nawaz Sharif said, “General Qamar Javed Bajwa, you are the one who packed up our government when it was working well.” ISPR rejected this allegation and used ‘friendly’ media to project Sharif’s outburst as an attempt of a guilty politician to conceal his wrongdoings.

Sharif also accused Gen Bajwa “for record rigging in the 2018 elections,” and that Imran Khan is widely referred to as a Prime Minister who had not been elected by the people but “selected” by the army vindicates this fact. Though Khan has always denied this allegation, but after his own ouster, just like his predecessor, the PTI chief starting making surprisingly similar allegations and even launched a not- so-veiled attack on the Pakistan army chief by saying, “… If one or two individuals do something wrong, the entire institution is not responsible. If one person [an obvious reference to Gen. Bajwa] makes a mistake, this does not mean that the whole institution is at fault.”

As I write, things are hotting up in Pakistan. While ordering release of PTI leader Shireen Mazari who had been arbitrarily arrested, Islamabad High Court [IHC] Chief Justice Athar Minallah noted that “These incidents happen when the Constitution is not respected,” and making it clear that “This court will not compromise on its jurisdiction,” reminded the Deputy Attorney General that “The abduction of Matiullah Jan [a journalist abducted by intelligence agencies] has not been probed till date.”Mazari herself has listed “intelligence agencies [implying ISI]” as one of her likely abductors!

Cases against three Pakistani journalists with leanings towards PTI have been registered and with them being booked under Pakistan Penal Code [PPC] for offences like ‘incitement to mutiny’ and ‘provoking to cause riot’ amongst other sections, it is clearly an attempt to terrorise and stifle opposition. Though Rawalpindi’s role in the abduction of Mazari and booking of journalists hasn’t been conclusively established, it has the characteristic hallmark of the army’s ISI.

In short, it’s amply clear that despite repeated assurances of DGISPR that Rawalpindi isn’t involved in politics, Rawalpindi continues to call the shots in Pakistan, and is an army at war with its own country!