Pakistan is moving ahead to devour occupied territories of J&K 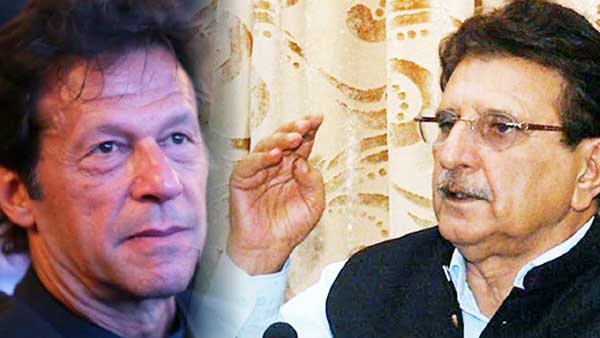 Pakistan cleverly and maliciously divided the occupied territories into two parts to ensure better control. The part contiguous to Poonch and Kashmir Valley, comprising of Muzaffarabad, Mirpur, Kotli etc, which had a population of Kashmiris, Sikhs and others was named AJK. The much bigger part comprising of Gilgit and Baltistan, which had a predominant Shia population having affinity with the people of Kargil, was named Northern Areas.

AJK, as the name suggests, was projected by Pakistan as a separate state with its own President and Prime Minister running an autonomous government. In actuality the region was administered by the federal government through a draconian Ministry of Kashmir Affairs which held all financial, judicial and administrative powers. The local administration and its heads were mere puppets. It is not without reason that the AJK government was always from the party that was ruling Pakistan, such is the level of rigging that is carried out during the sham elections. Raja Farooq Haider Khan belongs to the PML (N) which was in power in Pakistan in 2016 when elections were held in so-called AJK. Prime Minister Imran Khan is now waiting for an opportunity to dislodge him.

Pakistan has played a very duplicitous and immoral game in the Northern Areas. It made out a case that these peoples would have an option to decide whether they would like to go with India or with Pakistan or remain independent. Till such time that a decision came by, they would remain under administrative control of Pakistan. So Northern Areas are directly controlled by Pakistan. It treats these areas like a colony and has given away huge areas in the Shaksgam Valley to China illegally and has also built the China Pakistan Economic Corridor illegally through this area. In recent times Pakistan has been immorally trying to amalgamate the Northern Areas as a sixth Province of the country after renaming it as Gilgit-Baltistan. It has not been able to do so due to massive protests by the people and international pressure built through the Diaspora.

Now, it seems that Pakistan has opened a can of worms in the so-called AJK areas also. The statement made by the puppet prime minister gives an indication of plans being afoot to devour this region also. Another indicator that things are not well came in the form of a notification by the puppet Government of AJK in which AJK Management Board has been renamed as J&K Administrative Service.  The PM has asked for immediate withdrawal of notification and issue of apology, but the damage has been done.

The result is widespread panic in the region. Opposition leaders in so-called AJK have asked for clarification from the puppet prime minister and transparency in whatever happens further. Latif Akbar, leader of the Pakistan People Party that is presently in opposition has said that the statement of the prime minister was, “poisonous for the entire Kashmiri Nation,” since it would lead to a permanent division of the region and would amount to treachery by Pakistan with the people of Kashmir who have made many sacrifices for the cause. Latif also demanded that the Prime Minister convene an All Party Conference (APC) to address the development and discuss counter measures.

The panic reaction of the locals is quite understandable since such a move will strip the region of its very identity, however fragile it may be. There have been protests but the same have been brutally suppressed by the Pakistan Army. The Inter Services Intelligence (ISI) of the Pakistan Army continues to have an iron grip on the affairs in the region.

PM Imran Khan has been under pressure to act against India. Not many are satisfied with his measures and have started raising questions. This could well be his method to remove the heat from himself.

Strategic experts in India have also expressed concern since the move comes across as a tit-for-tat measure to counter India very righteous and constitutional reorganisation of its state of Jammu and Kashmir into two Union territories. Experts are of the view that the Pakistan Army Chief, General Qamar Bajwa, wishes gain complete legislative control of the occupied territories and then convert the Line of Control (LOC) into a permanent border. Such a move will put restriction on Indian military action across the LOC since it would amount to breaching the sovereignty of the neighbouring country. He will, however, continue with nefarious terrorist activities and Proxy War against India as before. In other words, Pakistan fears the possibility of getting into open conflict with India which may entail some strategic setbacks for the country and also loss of face, something that it is grappling with post the Uri Surgical strike and the Balakot Air Strike.

India is quite clear that the occupied territories are an unfinished agenda of the partition and they have to be taken back at the earliest. India’s determination is reflected by the map that the country has issued post creation of the two regional Union Territories. The map shows POK areas with the Union Territory of Jammu and Kashmir and Gilgit-Baltistan with the Union Territory of Ladakh.  “POK is part of India and we expect one day we will have physical jurisdiction over it,” is an emphatic statement recently made by the Indian Union Minister for External Affairs, S. Jaishankar.

Pakistan is already facing huge financial, political and internal security challenges. Its beleaguered government is in no position to play dubious games in the occupied territories. The backlash may be such that the government is unable to control. It is hoped that better sense will prevail before it is too late.