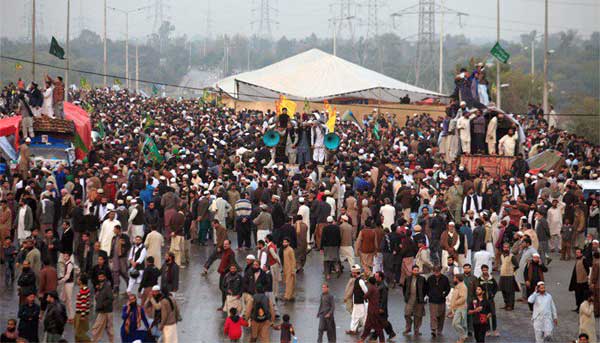 A few days back, two gunmen on a motorcycle opened fire on a police checkpoint in Islamabad, the capital city of Pakistan. In the ensuing fire-fight, an officer was killed, while two policemen sustained injuries; one of those injured succumbed to his wounds later.

The assailants were also killed, however, no identification was found on them which points towards the professional preparation that was carried out for the attack, Another notable aspect was that the assailants were carrying sophisticated Kalashnikov Rifles and 9MM pistols,

…the Government of Pakistan and its deep state (Pakistan Army) have much to worry about as the terrorist organisations that they have nurtured over time are now turning towards them and that too with great ferocity.

“This is a signal for us that terrorist attacks have [now] been started in Islamabad and we should be alert,” said Sheikh Rashid Ahmed, the Interior Minister of Pakistan, in his official statement on the incident. He was quite correct since the militant organisation Tehreek-e-Taliban Pakistan (TTP) later claimed responsibility for the attack. Earlier, on January 14, a Pakistani soldier was killed in Pakistan’s restive northwest bordering Afghanistan. This attack too was claimed by the TTP.

Clearly, the Government of Pakistan and its deep state (Pakistan Army) have much to worry about as the terrorist organisations that they have nurtured over time are now turning towards them and that too with great ferocity. There are numerous reports of incidents where TPP and other groups have attacked the security forces including the Army which is considered to be a holy cow in the country.

Sheikh Rashid Ahmed, by speaking about the threat of terrorism in the capital city was playing politics. He portrayed a grave internal security situation to divert attention from the other serious issues like the tottering economy that are being leveraged by the opposition to attack the beleaguered federal government. However, what is quite apparent is that the internal security situation in Pakistan is becoming more critical than the economic emergency.

Pakistan had celebrated the withdrawal of the US and NATO forces from Afghanistan as great victory on the premise that it would be able to control the new Taliban Government in Afghanistan. There was talk of an increased threat to the Indian Union Territory of Jammu and Kashmir from the spill over militants of Afghanistan Taliban. This narrative was spread by the Pakistan Inter Services Intelligence (ISI) as a part of its psychological operations with the intention of boosting the morale of the remnants of terrorism in Kashmir.

Things seem to have gone horribly wrong for Pakistan. The Afghanistan Taliban has shown no interest in joining the evil agenda of creating turmoil in Kashmir. It has, instead, shown a great interest in establishing good relations with India and has received a positive response from the Indian Government. On the other hand, it is quite evident that the Afghan Taliban is strengthening the hands of the TPP with the intention of gaining a political and military edge in the Pashtun dominated northwest frontier regions of Pakistan. This explains, to a great extent, the surge in militant attacks on security forces in Pakistan to the extent of the attacks in the capital city of Islamabad. It is interesting to note that the weapons used in the attack (Kalashnikov and 9MM Pistols)are standard arms in possession of the Afghan Taliban. There is a big possibility of those involved in the attack being Afghans.

The segment of the policy that is in the public domain is basically a conceptual document meant to ward off international pressure by creating an impression of being a mature state that is focussed on overcoming its many problems.

Even as this turmoil continues, Pakistan has come out with a new National Security Policy (NSP) that has been in the pipeline for the last seven years and is supposed to be relevant for five years. The segment of the policy that is in the public domain is basically a conceptual document meant to ward off international pressure by creating an impression of being a mature state that is focussed on overcoming its many problems. It is for this reason that the document refers extensively to the need for better management of the economy, how it will be done remains a mystery since it has not been explained in the NSP.

There is, of course, no intention elicited in the NSP of even attempting to improve relations with India. The document reiterates that the country remains, “steadfast in its moral, diplomatic, political and legal support to the people of Kashmir until they achieve their right to self-determination.” It is quite unbelievable that the NSP of a particular country would refer to the internal affairs of another country, but then, this is what Pakistan is all about. It can be said with confidence that nothing good would be written about India, particularly Kashmir, in the classified segment of the document.

Pakistan is in deep trouble, yet its leadership is choosing to remain in denial mode. Instead of tackling the critical internal security situation with strength and commitment, the Government is quite content in playing petty politics, even a significant document like the NSP is being prepared more for the gallery than to bring about much needed change; there is no serious intent of pursuing the policy.

The leadership thinks that it can fool the world but such is not the case, it is getting more and more isolated with every passing day, there is now talk of stripping the country of its Major Non-NATO Ally (MNNA) status. Such a move by the US and other countries will not affect Pakistan materially since it no longer receives aid from the alliance, but, it will definitely spell a permanent closure to the relationship that constitutes the only hope for the country to emerge out of the mess that it is in.

Pakistan is heading for a big fall. The weak socio-economic and tenuous internal security situation is making it all the more dangerous for the world, particularly South Asia and most of all India. Further, it is bent upon continuing with its misadventures due to the military strength that it manages to maintain despite all odds and due to its position as a nuclear power. India needs to remain vigilant, while making the right diplomatic moves in the international arena, the highest security threshold needs to be maintained, especially in Jammu and Kashmir.