The IAF has lost the qualitative edge vis-a-vis the PAF and the PLAAF, and may descend into numerical parity with the PAF for the first time in the near future because of our failure to induct new systems in time and in sufficient quantities. The IAF’s draw down will become critical by 2020 with all MiG 21s, MiG 27s and portions of the Jaguar fleet being phased out. No replacements in sufficient quantities are available as of now. While the Tejas Mk 1 LCA has technologies superior to the JF 17, the fact is that the latter has been in full operational service for some years, whereas the Tejas Mk 1 has not even been deployed and will be obsolescent soon. The Tejas Mk 2 variant is still on paper. One cannot fight a war using an aircraft which has some aspects of advanced technology incorporated but which is not combat-ready and available in very limited numbers. This mess is of our own making. Let alone a limited conflict on two fronts, we will soon lack the capabilities for a single front conflict if the situation is allowed to deteriorate further. Not just our combat fleet, but our helicopter, medium and light transport, intermediate and advanced trainer fleets, SAMs and a whole lot of other systems are obsolete and also not available in required numbers.

At its birth in 1947, the Royal Pakistan Air Force (RPAF) inherited just a few Tempest fighters and Dakota transport aircraft along with some Harvard and Tiger Moth trainers. The Pakistan military in general and the Pakistan Air Force (PAF) in particular languished till May 1954 when Pakistan signed its first defence agreement with the USA. And then, in September 1954, Pakistan became a member of the South East Asian Treaty Organisation (SEATO) which was formed to contain Soviet influence in the region. Pakistan continued to be a member of SEATO till the end of 1971 and was also a member of the Central Treaty Organisation (CENTO) or the Baghdad Pact from its formation in 1955 till its dissolution in 1979.

Membership of the SEATO and CENTO provided the bonanza that the Pakistan military had fantasized about. The PAF rapidly expanded with the induction of F-86 and F-104 fighters, a radar-based Air Defence (AD) system, air-to-air missiles, B 57 bombers, C 130 transport aircraft and T 33 jet trainers. Within about seven years from 1955, the PAF grew from a collection of obsolete weaponry to a modern Air Force equipped with weapons almost equal to those of smaller Western air forces. Given the dominance of the Pakistan Army in the affairs of state from the early 1950s to date, the PAF as well as the Pakistan Navy (PN) has always played and continue to play a subservient role to the Army in both military and political fields. Military domination has been the bane of Pakistan but it has helped in rapid modernisation of the armed forces.

The main benefit that accrued to Pakistan from its SEATO membership was access to Western systems and training programmes as also participation in exercises with US, British and other NATO forces. PAF pilots were attached to the USAF and RAF flying squadrons for relatively long tenures. PAF squadrons participated in multinational exercises and two generations of personnel were trained abroad at no cost. The resultant exposure was invaluable. In contrast, the Indian military had limited exposure to outside forces and concepts and even this was confined to a few courses attended by individual officers. The Indian armed forces and the Indian Air Force (IAF) in particular, never got the chance to participate in multinational exercises till around 2004-2005 except for a brief exposure in 1963 during the Shiksha Air Defence Exercise.

The PAF has around 450 combat aircraft of four types, distributed in around 20 Squadrons… …

The PAF went into the 1965 War with India with a balanced inventory of F-86 and F-104 fighters, B-57 bombers and C-130 transport aircraft. Replacements were available with friendly Arab states such as Jordan and countries to the West of Pakistan could provide sanctuary from IAF attacks if required. However, hopes of intervention from Western members of SEATO did not materialise.

The period between 1965 and 1971 saw the start of military ties with China and induction of equipment such as the F-6, the Chinese variant of the MiG-19 as also the French Mirage. The misadventure in East Pakistan was followed by its exit from SEATO. For the PAF and the rest of the military, the formation of Bangladesh reduced their area of responsibility. 1971 proved that the Eastern wing of Pakistan was militarily indefensible with the military resources situated in the Western wing.

The disenchantment of the USA with Pakistan that began in the 1970s came to an end with the policy to counter the Soviet Union in Afghanistan in the early 1980s. Induction of F-16 and additional Mirage fighters, upgrade of the AD network, acquisition of more helicopters and entry of Chinese A-5 fighters in 1983 and F-7 in 1988, were all supposedly to counter the Soviet threat but in reality, were India-specific. These inductions came at a time when the F-86, F-104 and B-57s were being phased out. However, sanctions to limit nuclear proliferation under the Pressler Amendment saw F-16 deliveries among other military aid items put on hold in the late 1980s. From 2007 onwards, the Chinese JF-17 inductions began. American efforts to get Pakistan onboard on their “war on terror” after 9/11 saw sanctions on supply of some systems being waived and F-16 deliveries and upgrades resumed. Induction of force multipliers such as Flight Refueling Aircraft (FRA) and Airborne Early Warning & Control (AEW&C) also began.

The PAF has, therefore, built up a substantial inventory of air-to-surface PGMs…

The organisational structure of the PAF with operational Commands on geographical lines is as under:

The PAF has around 450 combat aircraft of four types, distributed in around 20 Squadrons. The types of aircraft will reduce to three with the phasing out of the older fighters. There are 11 operational flying bases and eight other bases. There are approximately 30 airfields from which combat aircraft could operate including forward and satellite operating bases. Because of lack of geographical depth, all PAF bases are within easy reach of IAF strike aircraft and so dispersal of their aircraft becomes vital.

Relaxation of sanctions enabled the modernisation and augmentation of the F-16 fleet. F-16 A/B aircraft were upgraded to the F-16 AM/BM Block 15 MLU standard, mostly by Turkish Aerospace Industries, between 2010 and 2014. F-16C/D Block 50/52 aircraft were acquired between 2010 and 2012. These upgrades plus acquisition of new air-to-air missiles gave a Beyond Visual Range (BVR) and night attack capability to the force. Mirage avionics, Radar Warning Receiver (RWR) and ECM systems were upgraded under the Retrofit of Strike Element (ROSE) programme in-house. The aim was to maintain the viability of the Mirage III and V platforms till their retirement and replacement by the JF-17s, a process which has already begun. About 50+ JF-17s have been inducted. Older Chinese F-7P fighters are still in service and are also supposed to be replaced by JF-17s. Pakistan is offering the JF-17 aircraft for export. The Chinese J-10B, which has had a troubled development history, could also be inducted into the PAF. Chinese stealth fighters like the J-20 and the J-31, once in production, could be sold to Pakistan. A table listing the known fighter types in the force is shown below. 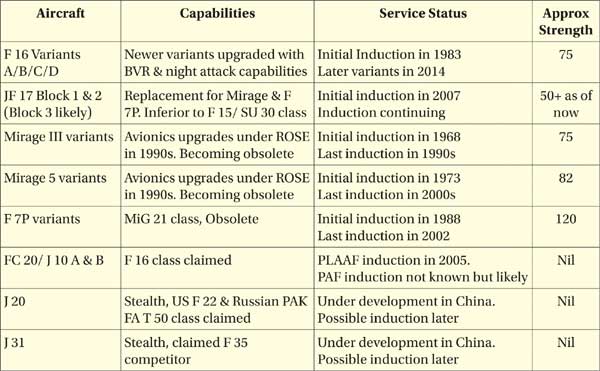 Four IL-78 Multi-Role Tanker Transport (MRTT) aircraft entered service between 2009 and 2011. Four AEW&C Erieye systems from Saab of Sweden mounted on Saab 2000 turboprop aircraft and using Active Electronically Scanned Array (AESA) radar technology were acquired and integrated with the Command and Control Ground Environment system of the PAF between 2009 and 2011. One was destroyed on the ground in a militant attack on the Kamra base in 2012. Three Dassault Falcon 20 jets in the Electronic Support Measures (ECM/ESM) role are also held in the inventory. Four Chinese Shaanxi ZDK 03 (AEW&C) aircraft based on the Y-8F 600, which is a Chinese derivative of the Russian AN 12 with AESA radars, began entering service in 2011.

The Pakistan Army has a few Eurocopter Fennec and IAR 330 light attack helicopters. The bulk of the attack helicopter fleet consists of Bell AH 1/FS Cobra and 1Z Viper helicopters with the more capable Chinese Z-10 entering service now. Shortage of attack helicopters has forced the military to use fast jets such as the F-16 with Precision Guided Munitions (PGMs) for counter insurgency operations. The PAF’s helicopter lift capability is somewhat limited with 40+ Mi-17s and Alouette IIIs. (Only types with significant numbers have been considered).

To increase effectiveness and limit collateral damage during counter insurgency operations, the PAF and Pakistan Army Aviation have increasingly used PGMs. The PAF has, therefore, built up a substantial inventory of air-to-surface PGMs and developed expertise in their use and along with the Army in the use of attack helicopters and fixed-wing fighters in low air threat scenarios in the mountains.