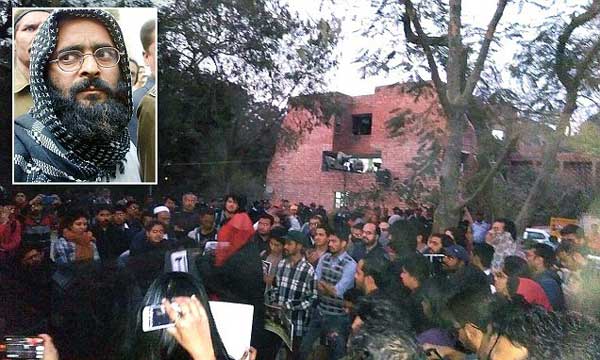 The recent anti-national sloganeering in JNU campus has shaken the collective conscience of India. This anti-national fulmination by the students of the JNU had vicious pro-Pakistan overtones in context of Kashmir. The centrality of Kashmir drove the students to the extent of wishing ‘breaking India’ into nine pieces. It may be reiterated that these students are subsidized hugely by the Indian taxpayer.

Most of these activists are on the payroll of NGOs and agencies of inimical countries. Many of the activists in JNU are no exception.

This author, asked one of the key leaders of the entire anti-national movement a basic question with regard to Kashmir rather Jammu and Kashmir, the question being – which are the broad geographical parts of the Indian held and Pak Occupied J&K? This question was asked with the qualifying pre-condition that if she, the anti-national and Kashmir activist were to answer correctly, this author would never show his face on television. It may appear to be a huge risk but this author was confident that the so-called activist would be askance at the question. This author then asked the lady activist if she had any clue about Northern Areas or Gilgit-Baltistan. She again drew a blank. She was then reminded that to one can only be an activist, if one is informed about the subject, but unfortunately this is never the case.

In India, most activists have no clue about the causes that they take up beyond rhetoric. Most of these activists are on the payroll of NGOs and agencies of inimical countries. Many of the activists in JNU are no exception. This author since the anti-national staging of theatrics has shared many media platforms with professors of the JNU. They all stressed on the inescapable desirability of debates and dissensions on the campus. They invoked democracy in pursuit of their leftist agenda. When reminded that the French have declared emergency after one attack and the man who threatened to kill the then American President on face-book still languishes in jail, they had no answer. Importantly, when asked if they did condemn China for not allowing space for alternative ideologies, they all refused to comment. The China factor is therefore overriding. The anti-national sloganeering exposed the tryst between the Maoists, the Jihadis and the Pak sponsored Kashmiri militants. Therefore, the Pakistan angle is also pronounced.

…what we saw at the JNU was a reverberation of the common agenda which aims at imploding India through the volatile mix of violent ideologies of Maoism and Jihad.

The tryst between the Maoists, the Jihadis and the Kashmiris was in the ferment for very long. The most glaring indicator was in October 2010 when Hurriyat leader Syed Ali Shah Geelani – Arundhati Roy and the Maoist leader Vara Vara Rao shared the stage at a seminar in Delhi. The topic of the seminar was ‘Azadi – the Only Way’. A large number of JNU students were cheering them, but there were also patriotic elements present, who neutralized this cheering brigade in their own innovative way. The then Law Minister M Veerappa Moily said “…most unfortunate. While there is freedom of speech, it can’t violate the patriotic sentiments of the people.”

The then J&K Chief Minister’s father Farooq Abdullah said: “There is too much of freedom in India that some Indians themselves are taking advantage of this and destroying the country. There are no limits of the way they are using this freedom”.

In June 2009, Mohammad Omar Madani, a close associate of Hafiz Saeed, was arrested by the Special Cell of Delhi Police near Qutub Minar area in New Delhi. He revealed that LeT has forged a linkage with Maoists and other insurgent groups in India. He emphatically declared that he arrived in India in May 2009 to initiate the ISI’s support to the Maoist insurgency. His diaries contained the blueprint of Pak ISI’s plan to dismember India.

Madani also confirmed the ISI plans to establish a joint jihadi – Maoist base in South India. It may be recalled that there were unimpeachable reports about 500 Maoists and cadres of Students Islamic Movement of India (SIMI) undergoing joint training in the Vagamon hills on the Idduki-Kottayam border in 2008. Madani during interrogation displayed extensive insights into the Maoists organizational structure and functioning and had been receiving fake currency to fund terror activities in India.

So what we saw at the JNU was a reverberation of the common agenda which aims at imploding India through the volatile mix of violent ideologies of Maoism and Jihad.

…white-collared terrorists in the garb of intellectualism are orchestrating the splintering of India by subversion of the students by teachers and intellectual -terrorist intruders in the campuses.

The attack on Army convoy in Moltuk valley at Parolong in Chandel district of Manipur on June 04, 2015 in which 18 personnel of 6 Dogra were martyred was ascribed to the NSCN (K). There was however another group Peoples United Liberation Front (PULF) which was suspected to have played a facilitators role. The link between this Islamic Group of Manipur and LeT has been in evidence for some years now. The first reports with regard to this nexus emerged in December 2006 with the arrest of three Manipuris, i.e. ‘Salmaan Khurshid (23), Abdul Rahman (24), and Mohd Akbar Hussain (20) by the Delhi Police. They were carrying 20 Kg of RDX, detonators and hand-grenades.

Delhi, therefore, has emerged as the meeting point between the Jihadis, Maoists and various insurgent groups.

It is from here that white-collared terrorists in the garb of intellectualism are orchestrating the splintering of India by subversion of the students by teachers and intellectual -terrorist intruders in the campuses.

Even the progenitor of jihadi terror, Pakistan, has banned preaching activity on university campuses and hostels in Punjab province by the Tableegh-i-Jamaat, even as there is no direct evidence of links of terrorism with this group. The Tableegh-i-Jamaat is a loose organization. Many religious outfits in Pakistan blame this organization for pushing people away from jihad and politics. However in university campuses in India such as JNU, jihadi outfits of all shades in the name of ‘Freedom’ are allowed to flourish, even if they be engaged in anti-national activity.

Further, Syed Abdul Karim Tunda, who was arrested in August 2013, revealed and reconfirmed the linkage between the ISI and LeT with the Maoists in India.

The entire background that has been portrayed by virtue of various inputs and suggest a pattern : 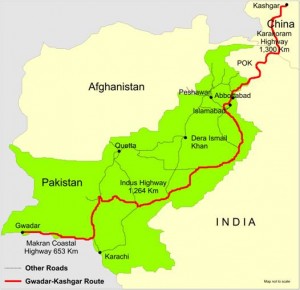 The Pakistani media has been agog with the inputs attributed to government sources about Pakistan establishment’s decision to upgrade the Constitutional status of Gilgit-Baltistan because of the Chinese pressure. Reportedly, the Chinese have been insisting that they cannot invest the envisaged $ 46 billion in the China-Pakistan Economic Corridor (CPEC) project in a territory, whose legality even as per Pakistan is doubtful.

The CPEC, China maintains is essentially a strategic project with long-term implications of Chinese thrust into the Persian Gulf region. It also is a key to the Chinese project of ‘One Road One Belt’. The people of Pakistan having suffered all these years economically are perceiving the CPEC as a panacea of all their economic woes. Hence, the Pakistani establishment may not find it difficult to mobilize the masses in favour of absorption of Gilgit-Baltistan, even if it means forgoing or diluting their claim on the Indian part of J&K.

The meeting of the Maoists and the Jihadis, orchestrated by China and the Pak ISI should therefore be seen with this geopolitical prism. Its ultimate objective is to absorb Gilgit-Baltistan to begin with, which is not possible without an unstable India.

The spokesperson the Chief Minister of Gilgit-Baltistan, Sajadul Haq said: “A high level committee formed by the Prime Minister is working on the issue and you will hear good news soon”.

Pakistan strategic analyst Ayesha Siddiqa is of the opinion that this historic constitutional shift may also reflect Islamabad’s imperative to end Kashmir dispute it would tacitly result in recognition of India’s claim in Indian held Kashmir.

A statement attributed to Hafeezur Rehman, the Chief Minister of Gilgit-Baltistan is to the effect “Gilgit-Baltistan and Astore are disputed districts since they were part of Dogra State of J&K, however, Ghizer, Diamer, Hunza and Nagar districts are not disputed and therefore integral part of Pakistan”. This statement is significant but there is nothing surprising about it, as the Chief Minister is known to be a lackey of the Pakistani establishment and has found a way to legitimize CPEC.

Referring to media reports about a meeting chaired by Nawaz Sharif on 14 January 2016 to discuss the merger of Gilgit-Baltistan with Pakistan, the JKLF Chief Yasin Malik wrote a letter to him that the move to merge the region with Pakistan will give India a political and moral right to the retention of Indian part of J&K.

Compelled by the Chinese, strategic thrust through the length of the country to the Persian Gulf by way of CPEC, the Pakistani establishment hurriedly introduced ‘Empowerment and Self-Governance Order 2009’ to legalize annexation of this area.

Geopolitical imperatives impelled US to treat Pakistan and Afghanistan as intertwined entity and gave it the nomenclature of Af-Pak region, which will acquire the stature of China-Pak region in years to come. Pakistan may end-up being a semi-autonomous region of China, thus exposing India to a two-front threat in perpetuity.

The meeting of the Maoists and the Jihadis, orchestrated by China and the Pak ISI should therefore be seen with this geopolitical prism. Its ultimate objective is to absorb Gilgit-Baltistan to begin with, which is not possible without an unstable India. What therefore happened in the university campuses in Hyderabad and JNU is the part of that script. Deciphering and unravelling this entire script is beyond a police job and therefore needs the intervention of the National Investigative Agency (NIA).

7 thoughts on “Pak-China Script in University”