‘Pak Army for better ties with India’ is Hogwash 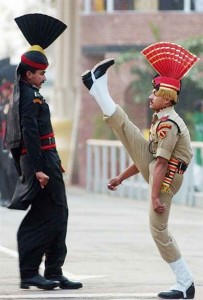 Screaming headlines and newspaper waving gleeful ‘Track 2’ members are giving thumbs up on an ‘about to restart Indo-Pak peace process!!! In a recent briefing and interaction by the Director General (DG) of Inter-Services Public Relations (ISPR), Major General Asif Ghafoor with some ‘select’ South Asian media publications, he is said to have stated that “engagement is the key to normalisation” hinting that the ‘powerful’ Pak Army is now pitching for better ties with India. He is also quoted to have said “Pakistan is a peaceful country and does not want war with India” but hastened to add that if war was thrust upon them, then the Pak Army would give a befitting response. He indicated that Islamabad has always been ready for “comprehensive dialogue”!!

India has always maintained that it is a peace loving nation. If Pakistan, as the DG ISPR claims, is also a peace loving country then how is it that there has been no peace on the India-Pak border for the last 71 years?

Strangely, the DG ISPR is intruding into the foreign policy domain by way of this initiative of his to interact with foreign journalists on a purely non military subject of bilateral relations between India and Pakistan. And on top of that calling for “engagement” and “comprehensive dialogue”!! Did no one ask of the whereabouts of the Pakistani Foreign Affairs Ministry’s spokesperson? During the whole proceeding the Foreign Minister of Pakistan must have been squirming in his lofty seat all the while exclaiming “Et Tu Ghafoor?”!

Incidentally, India has always maintained that it is a peace loving nation. If Pakistan, as the DG ISPR claims, is also a peace loving country then how is it that there has been no peace on the India-Pak border for the last 71 years? One of the two is fibbing, and it surely is not India.

An interesting fact of these Indian Track 1.5 and Track 2 to Pakistan is that they mainly comprise former diplomats and academics. These groups are interacting with the Pak Army Officers in the guise of ISPR. The man in uniform in Pakistan may, out of courtesy, treat them politely but there is always an element of veiled condescension in their interaction with them. For the Pak Army these are ‘lesser mortals’. It will be recalled that a decade back one such (un!!)Tracked group had thought it acceptable to bargain Siachen for peace!!!! Unfortunately there were a couple of military veterans among them too.

It is expected that before any dialogue can be thought of, Pakistan needs set the stage by taking legal action against the planners, abetters and all those involved in the 26/11 Mumbai terrorist attack…

It would be interesting to speculate on what prompted the Pak Army Chief to ask his DG ISPR to undertake such an exercise as this briefing of ‘select’ media personnel from South Asia. It is possible that Pak is finding itself isolated in the global arena. The emphatic cut in military aid from the US is having a dampening effect on the Army. The Pak budget cannot sustain the type of lavish defence budget that the Army had got accustomed to – it will cripple the nation’s economy in less than decade. So Pakistan has to put up this façade of ‘engagement for normalisation’ of relations.

Another possibility could be that China is not willing to dump money to sustain Pak’s military spending and could be nudging Pak to propitiate its relations with India. China has invested huge funds in China Pakistan Economic Corridor (CPEC), its flagship project of the strategic Belt and Road Initiative (BRI) and will not compromise of the expected returns. A war between India and Pakistan will be a major setback for it. Since it has so much at stake in Pakistan, it will, willy nilly, be sucked into the conflict between India and Pakistan. Such a prospect does not augur well for China’s aspirations of ‘great power’ status.

It is expected that before any dialogue can be thought of, Pakistan needs set the stage by taking legal action against the planners, abetters and all those involved in the 26/11 Mumbai terrorist attacks – now that the former PM Nawaz Sharif has himself admitted to Pak involvement. The Hafiz Sayeeds, Masud Azhars and their ilk have to be acted against. They cannot be allowed to freely run around all over that country spewing venom against India. Also Pak needs to give the hint to China not block the UN action in declaring Masud Azhar a terrorist. Stop supporting these terrorist groups and take active measures to prevent terrorists infiltrating into J&K. But can the Pak Deep State allow such drastic steps to be taken? Unfortunately the answer to that will be an emphatic NO. The Deep State has too much at stake to let go or unwind and shrivel away. Let our liberals and peaceniks not be fooled by these gimmicks and get carried away – of that we have a surfeit of them who will rush to Wagha border crossing point and light candles at the drop of a hint of Pak seeking ‘peace’.

To understand the reality of the status of the Pak Army in that country, it would not be out of place to narrate a firsthand experience which highlighted some subtle truths.

On a visit to Islamabad as a member of an official delegation, some years back, comprising members from the MEA, MoD and MHA, it was intriguing to be asked, at the reception desk of the hotel where our delegation was being put up, of my Army rank. The room allotted was probably not any different from the other rooms but just because I was a serving Army officer in the delegation they were making a distinction. In hindsight it occurred that the room could have been bugged and under kept under surveillance through hidden spycams! Anyway be that as it may, during the course of the visit during an informal discussion with Pak officials from the External Affairs Ministry and Home Ministry they were very keen to know whether the Indian Army officers too enjoyed such special privileges as the Officers of the Pak Army did – being allotted land at throw away prices, secure jobs after retirement in the various ‘businesses’ run by the Fauji Foundation and such like. I politely informed that the Indian Army was fully under the Government in power and thus under civilian control and no such privileges were ever instituted. There was a hint of envy in the tone of these officials who resented the supremacy of the military in Pakistan. Given half a chance they would like to bottle the Army up once and for all, strip them of all privileges and take back the assets these officers have individually acquired. It may sound absurd but this is one major reason why the Pak Army cannot let go of the control it has over everything in Pakistan consequently, it is here to stay.

Moreover, the ‘plight’ of the Army in India, as is often highlighted in the print and social media, would not be lost to the Pak Army and it only reinforces their resolve to retain control of the pecking order in their country. Ironically, while India faithfully follows the epitomised norms of diplomacy and dialogue with a legitimate government in power it evidently does not gel with Pakistani Army which is in power but not a legitimate government. Strange dichotomy!!!!!