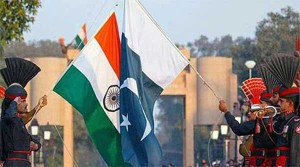 Indian decision makers advised by their advisors/diplomats were too quick to be trapped in Imran Khan’s letter to Prime Minister Modi, calling for resumption of peace dialogue, by announcing the “Meeting between the foreign ministers of India and Pakistan on the side lines of UNGA later this month”. It was also clarified by MEA that “There was no change in its policy that talks and terror couldn’t go together”. Within one day of such announcement MEA on Friday announced calling off the meeting citing the two incidents, regarding release of stamps to glorify terrorists and mutilation of the body of soldier in BAT action. The fumble, perhaps due to public outrage is quite evident. In a sensitive subject involving public sentiments and having security implications, it is quite evident that the fumble represents lack of understanding of security issues by the people involved in it.

It is not difficult to understand that unless Pakistan shows some credible actions, it may get further punishment from Financial Action Task Force (FATF), which might declare it black. It would pose insurmountable economic problems for newly elected Prime Minister Imran Khan to govern Pakistan. A peace initiative like this can thus be an optical mirage to suggest that he is trying his best. Even if we leave out the two incidents of last two days, and assess if terror activities/proxy war has reduced after his taking over as Prime Minister or otherwise, the answer is a clear NO. It is well known that he is a puppet Prime Minister propped up by Pakistan Army, which holds all levers of power. An active Indo–Pak border/LoC is Pakistan Army’s existential requirement to hold power which it will not compromise. A pressure by US/China and loaning agencies like IMF could be another reason for initiating such a letter. The fact that the courts have allowed Hafiz Saeed to start business as usual, over-ruling the Government indicates Imran’s inability in reigning UN declared terrorists. The courts in Pakistan have also been on behalf of the Army, which is proved by the fact that when Nawaz Sharif made peace overtures towards India, and tried to control Army, he found himself in jail. He is now out, when he is harmless to the Army.

In my opinion India could try Imran’s experiment with peace and his survival there-after, only at an appropriate time, which definitely cannot be before FATF ruling and certainly not now. To experiment with him, his initiative has to be preceded with few steps like no ceasefire violations, no support to terrorists in terms of harbouring/training/protecting them by Pakistan Army, taking immediate action on UN declared terrorists and convincing not only India but FATF, US and global community of having done so. I do appreciate that a peaceful, truly democratic Pakistan, giving no support to terrorism is in Indian interest, instead of radicalized one, but this looks like a dream, which can take away the sound sleep of Pakistan Army and ISI.

When many diplomats/strategists and the establishment were justifying the meeting, they tried  to explain the difference meeting and dialogue, justifying no change in Indian stance, but the letter of Imran Khan clearly indicated what he expected to be spoken in the meeting. It will be naïve to assume that it could have been a meeting with no issues of divergences discussed, ending with pleasantries and future plan of dialogue. Even in informal meetings between leaders earlier, all issues of divergences were discussed. In fact we should have understood that even if meeting was done as explained, we would have lost out in giving them a point to score in FATF and General Assembly. It is encouraging to see that a midcourse correction of cancellation of meeting took place.

What do we do to Deter Pakistan from Proxy War?

To deter a neighbor to stop proxy war, there is a need to have a clear National aim, National Strategy, Comprehensive National Power and the will to use it. For many decades, it has been seen that the need for hard power has been underplayed by diplomats/bureaucrats, who have been able to convince the political hierarchy that diplomacy can resolve security issues and relevance of military forces stands considerably reduced. This is a major departure from basic teachings of Chanakya that no nation can be strong and secure without a strong military. This has resulted in inadequate defence budget, bulk of which is consumed by bloating, inefficient, defence civilians and inadequate modernization taking away the conventional edge required to deter the notorious neighbor. Politicization of defence matters like surgical strikes, defence procurements by all politicians looking at political aim instead of national aim, has slowed down the pace of modernization.

In fact not many decision makers understand the basic difference between Para-military forces, which are protective forces trained and equipped accordingly, and Defence Forces, which are the punch of the country, instruments of last resort, trained and equipped to project national power across the IB/LoC. The confusion is evident from the fact that Defence forces are increasingly being employed for internal security and being targeted by legal and Human Right fraternity. The consistent lowering of status of Defence Forces for decades confirms this confusion. The end result is that the adversary is not deterred and continues with proxy war. Even within the country in border areas like Kashmir, the political games have not allowed to deal with internal enemies like separatists, which have created conditions for proxy war to succeed. India therefore urgently needs to do capacity building of its military and deal firmly with separatists, not in the form of speeches but convictions. India also needs to apply some lessons of history of 1962 debacle due to lack of military advise and success of 1971 War due to direct military advice to decision makers, by getting some military specialists in decision making loop.