India and Pakistan shared the military assets of British India based on a ration of 2:1. However, despite the numerical advantage India enjoyed, the forces deployed by her in J & K and those opposite Hyderabad in the winter of 1947 is tabulated to present the bias. This is despite the fact that at that stage, there was a full-fledged war going on in Kashmir, compared to only a ‘preventive’ deployment around Hyderabad. In addition, vital assets, including air and armour were widely distributed against a trumped up Pakistani threat against the Indian states of Rajputana, Kathiawar, Assam and Bengal. Pakistan may have been worse off, but she had the advantage of hordes of fundamentally charged tribals.

Though it is not intended to go over the detailed conduct of the campaign, an overview to highlight the fact that the opposition was highly over-rated and operational difficulties were deliberately played up by the English Generals who ran the show in South Block is presented. As per the appreciation carried out by Major General CE Pert, then commanding the Armoured Division (18 November), substantiated by Lieutenant General EN Goddard, the Southern Army Commander (28 November), it was assessed that the Indian forces stationed in Secunderabad would be incapable of defending themselves and being vulnerable, should be moved out. While this must have been correct, rather than building up their strength, assets were relocated out of Hyderabad, which would have encouraged the Razakars.

…combat air assets which are inherently flexible and whose aggressive employment could have made a major difference, were also fixed around Hyderabad against an illusionary threat.

The decision to pull out forces was despite the fact that as early as 20 January, the Government of India had specifically tasked Southern Command to ‘prepare a plan to ensure the safety of lives and property of Indian nationals and to prevent raids into India.’ Though, the intent may be defensive, it can be inferred that the situation was serious and required a military solution. Thus, pre-positioning and preparation were important.

The Issue of Timing and Force Levels

General Goddard presented his plan for the offensive into Hyderabad on 3 February and recommended a multi-directional offensive with the main thrust, spearheaded by the Armoured Division to be launched from Sholapur, synchronised with ‘holding’ operations to pin down state forces on the borders. Had the plan fleshed out in the first week of February been executed early, considerable forces could have been released for operations in Kashmir during the ensuing summer.

The situation in Kashmir needs to be co-related, as by then (February-March 1948), apart from regaining control over the valley, India had already lost Mirpur, Bhimber, Kotli, Rajauri, Muzzaffarabad, Chakothi and Gilgit, while Naushera, Punch, Uri, Bandipore, Skardu and Kargil were under threat. While it had been calculated by South Block that additional forces for Kashmir could not be sustained logistically, ways and means to at least bolster the forces fighting in the plains of Jammu could have been improvised. In any case, combat air assets which are inherently flexible and whose aggressive employment could have made a major difference, were also fixed around Hyderabad against an illusionary threat. Neither was India’s superiority in terms of armour ever considered to recapture Bhimber and Mirpur, located in the plains opposite Akhnur. Indeed, it was paradoxical that the open corridor from Akhnur leading to Mirpur was never exploited. On the other hand, repeated requests for desperately needed forces were deftly deflected; unfortunately for India and Kashmir, English counsel was allowed to prevail over the Indian leadership.

In terms of timing, since the decision to execute a military option had been accepted in principle, it may have been prudent to complete the operation at the earliest. Not only would this have freed Indian forces, but also denied preparation time to the adversary. Ideally, March could was suitable as the bulk of the forces were in place and the monsoons were still two months away. Dithering and delays proved costly in the context of the Kashmir war.

Despite the stated aim for ‘executing a rapid seizure of Hyderabad’ without worrying about the Lines of Communication,[2] the offensive that went in was deliberate and methodical. Notwithstanding, against a cautious time envelope of fifteen days, General Chaudhari, forced an unconditional surrender on Edroos within five days, exposing the myth of superiority of Hyderabad’s forces and the hype around the Razakars and the motley lot of Irregulars. However, Chaudhari still had the difficult task of rounding up the separatists and though Razvi was picked up, this took time and consequently, no forces could be made available from Hyderabad for Kashmir. The progress of operations, thrust lines and forces employed are annotated on the map: 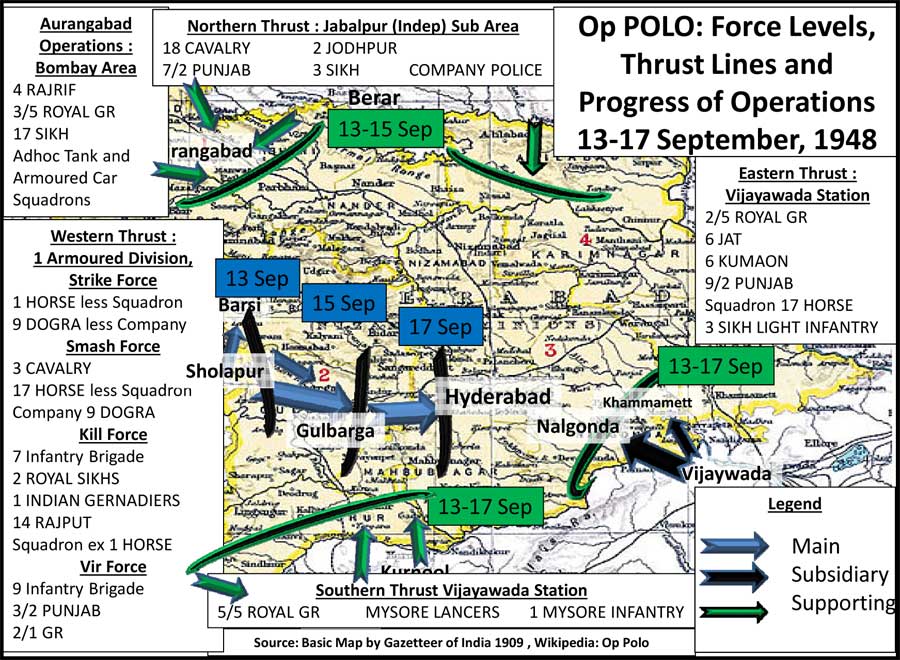 Despite many distraction(s), it was creditable that the campaign was still taken to its logical conclusion. There was palpable synergy not only within the Army and the Air Force, but also with the Civil Administration. In the words of Major General (later Chief) JN Chaudhuri, the architect and principal actor: (it) was a brief incident, satisfactorily planned and against forces, who after the third day, virtually collapsed.’

Having said that, the question this account started with remains: Was this operation needed? If so, could it have been timed/executed differently? Though this hypothetical question has more political than military connotations, it highlights the importance of ‘deciding on the ‘right’ action at the ‘right’ time.’

Complex challenges are emerging on India’s strategic horizon and it is incumbent on the new leadership that has taken guard in New Delhi that not only do they work out their priorities, but also think through ‘how’ and ‘in what manner’ they should act/react. ‘Fighting/preparing for the ‘right’ war at the ‘right’ time with the ‘right’ forces is the panacea for success but to ensure this, operational contingencies need to be thought through with deliberation and preparations ensured in peacetime.

[1] As given in the he Assessed Order of Battle of 1 Armoured Division’s Operational Order No 3 of 30 August, 1948, appended in Op Polo: The Police Action against Hyderabad, 1948, Historical Section, MoD, Government of India, New Delhi, 1972.