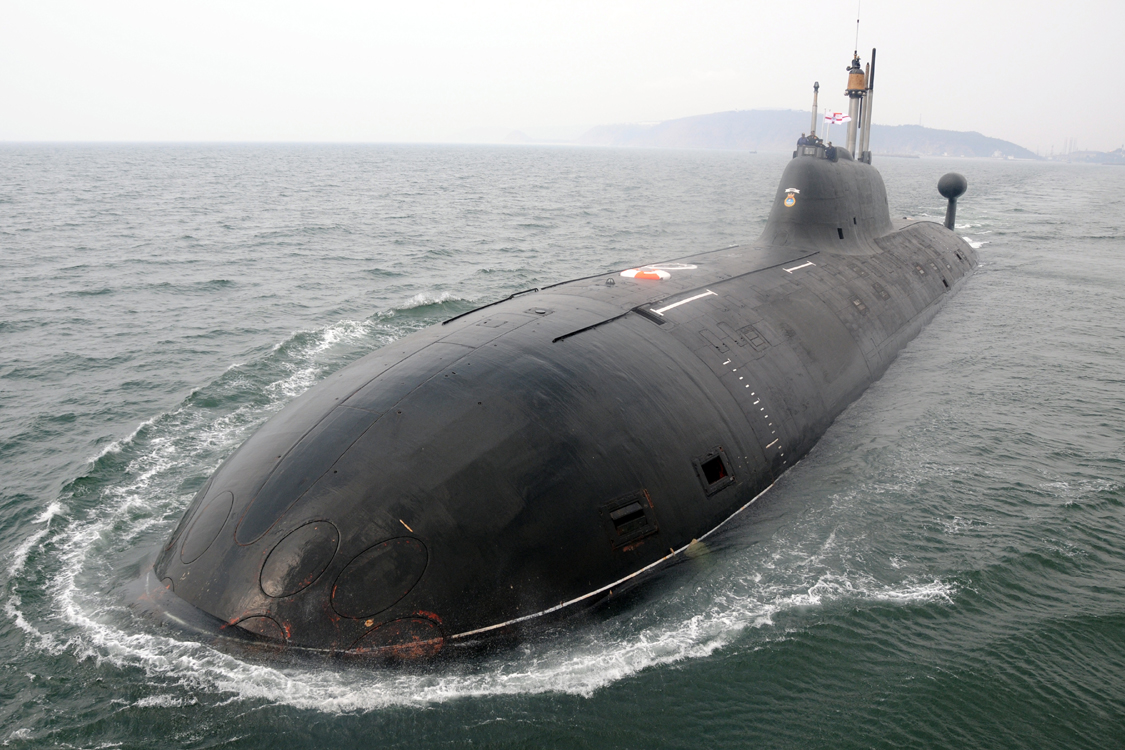 The idea of nuclear propulsion for ships and aircraft for India was first mooted by Dr Homi Bhabha in 1954. In 1965, he sought assistance from US Atomic Energy Commission for developing nuclear propulsion technology. This was turned down. This should have been no surprise – as at the time, the US was unwilling to share this technology even with its close NATO ally, France. In 1968, the idea remerged, when the Prime Minister, Indira Gandhi assigned to the Committee on Science and Technology (COST) – the task of identifying cutting edge technology areas in the field of S&T. She emphasised the priority being given to defence-oriented technologies. The Director of Marine Engineering (DME) NHQ chose to propose nuclear propulsion for submarines (s/m) as one of the thrust areas. At that stage, officially no specific platform i.e. Nuclear Attack s/m (SSN) / SSGN or Ballistic Missile s/m (SSBN) was projected except that it was for s/m propulsion. The understanding was that the Indian Navy (IN) along with Bhabha Atomic Research Centre (BARC) would start work on a feasibility study. The strategic difference between the sea control role and strategic deterrence role was none of their concern, at that stage.

There is a common belief that the genesis of a nuclear powered s/m for the IN was laid in 1968, when the Soviet Defence Minister (DM) Marshal Grechkov and Admiral Goroshkov on a visit to India gave Prime Minister Indira Gandhi the impression that the USSR was willing to assist India in acquiring a nuclear powered s/m fleet. It is claimed that a note verbale to this effect was submitted to the – Prime Minister1, but she was non committal at this stage2.

By 1971, the environment had become even more favourable. Admiral Goroshkov had clearly demonstrated that the mere presence of just one Soviet SSN in the Indian Ocean was able to compel the US carrier battle group to withdraw from the Bay of Bengal from threatening Indian action in the Bangladesh liberation movement. As far as the Prime Minister was concerned, this was presumably the prime factor that convinced her of the importance of a nuclear submarine for the security of the nation.3 The following events gave further impetus to the proposal:

A Debate on Choice of SSN vs SSBN for India

Till the 1990s, there does not seem to be any evidence to show that there was any formal directive calling for SSBN. The formulation of the technical assignment for S2 in 1982 could be considered as the first indication – leading to a strong school of thought that perceives that the primary objective indeed was to fulfil the strategic deterrence role. And that the official stand of choosing the sea denial role, was merely a subterfuge, a front and a stepping stone at that. In the Indian context, taking precedence into account, a parallel could be drawn with the way issues like, the nuclear tests, biological warfare material stockpile creation, its ultimate destruction and the SSBN, were handled with least publicity or institutional military participation.

The evolution of SSBN is a progressive process commensurate with the actual development in the respective silos. As would be shown later, working in four semi-autonomous silos linked horizontally under the Prime Minister’s Apex authority for each – was the order of the day. Presumably, declaration of intent was accordingly tutored in unison with the developing scenario.

As a devil’s advocate, the other arguments in favour of a contrarian point of view are as follows:–

The silo matrix statement presented later28 capsulates the jigsaw puzzle in totality for the period 1969 to 2025 – chronologically, illustrating the horizontal linkages across the four silos and gives full credence to the devil’s advocate hypothesis.

A comparative statement in respect of a projected nuclear s/m programmes for USN and a conventional s/m for the Royal Australian Navy (RAN) planned for execution in the 21st century is presented below.29

Taking into account India’s starting point on the learning curve, the severe technology denial regime in place and comparatively small number of designers employed, the overall performance is considered laudable. A total period of 32 years taken by the Arihant with around 500 designers as opposed to 27 years allotted to the US Variant B with 1,000 designers is considered reasonable.

On hind sight, had we from the beginning exercised the Spaasky option for the PWR and SDG accepted unbridled  support from the Consultant’s  Design Bureau, same as resorted to after 2000 – would have resulted in a saving of at least five years. These options were available all along but not availed of due to mis-guided national pride and over confidence in ones design capability.

On the basis of contemporary practice on nuclear s/m inservice, it was considered that enriched uranium-based plate type fuel package was the optimal choice for s/m PWRs. At the initial stages of the Project, India had serious constraints on ready availability of enriched uranium and BARC had no expertise on production of plate type fuel element. Hence, perforce the rod type of fuel was chosen for the PTC with the expectation that the plate type would be developed for the s/m PWR.

The availability situation for enriched uranium is now quite satisfactory. But thirty-seven odd years down the line, whether due to financial constraints or inadequate pressure from the user, there seems to be no movement towards upgrading to plate type fuel package.

Explanations, such as difficulty in fabrication and it being more susceptible to leaks, are not considered sufficient grounds to abandon the effort to develop a more efficient/safer system. Especially, since we are now venturing into newer domains that require much higher power and re-engineering would be unavoidable. The technology demonstration solutions acceptable then, under severe technology denial regime, cannot be perpetuated forever. DAE should not be permitted to rest on their oars and relax on the s/m safety standards on this count unless globally the technological assessment of the fuel packages itself has now veered away, in favour of the rod type fuel solution. 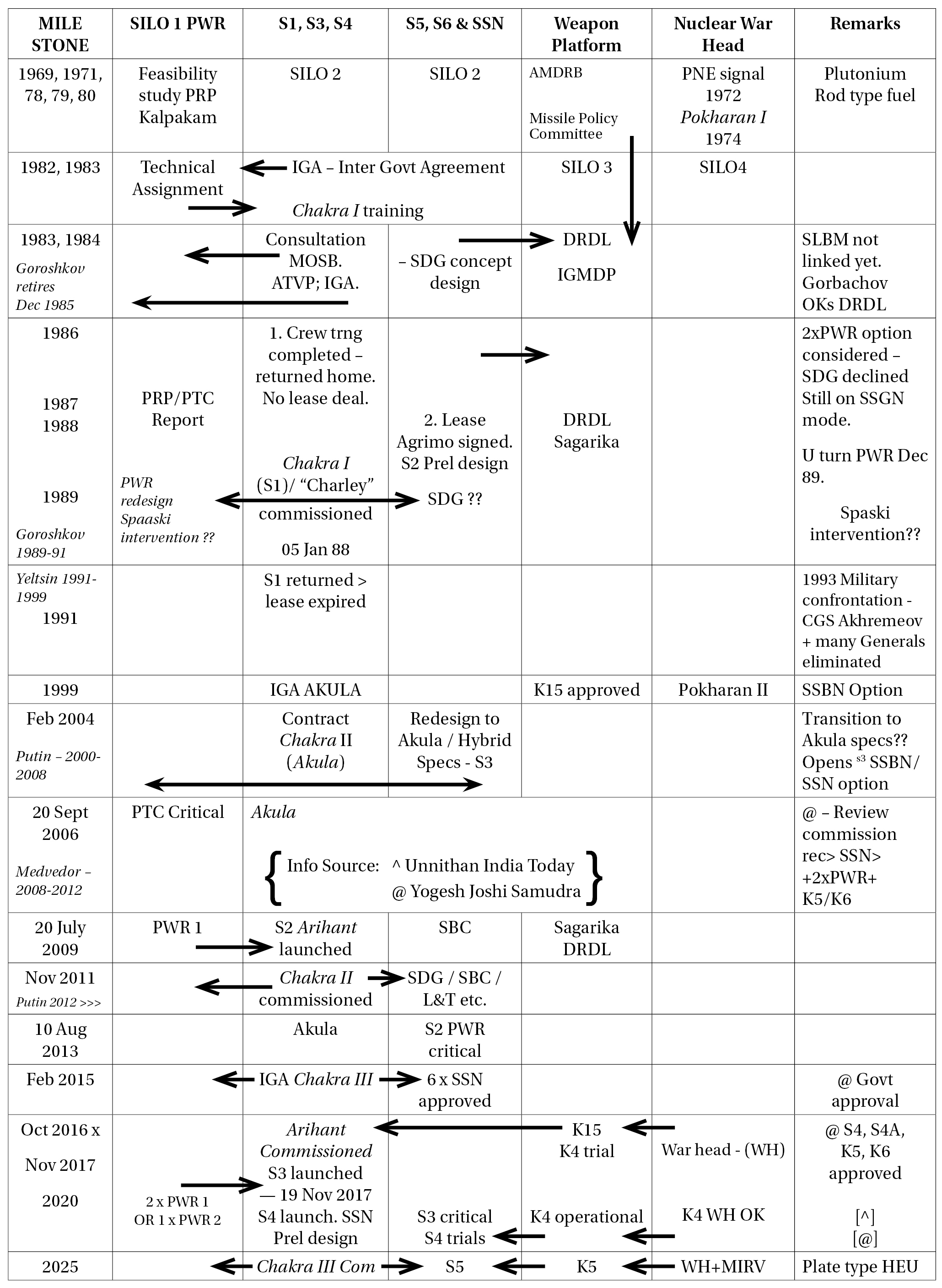 The above also needs to be looked at along with the offer purported to have been made by the French earlier, against the offset provision of the Scorpene deal.30 Similar possibility could be explored now in respect of acquiring TOT on plate type fuel package for the PWR against the offset clause when negotiating for the Project 75I.31 In case the new DPP 2020 with specific reference to alterations in the off-set clause for strategic partnership model comes in the way – then alternatives such as abinitio single venture / quid pro quo basis would have to be resorted to.

For the larger SSBN on the anvil i.e. S5 and S6, one could standardise on the existing PWR1 and opt for a two PWR solution or for a new larger PWR2. One would recall that the two PWR was an option considered earlier, but rejected on the grounds that such a change mid-stream would result in infructuous re-work that would further lead to high cost/time over runs.32 A post-mortem of that decision would have some lessons also.

Power enhancement could also be achieved by using higher enriched uranium. That would further improve the time between refuelling and the operational availability of the s/m. In any case, for the SSNs, it would be considered necessary to go in for a plate type fuel package option especially to fully satisfy the safety and performance criteria. Even if we can live with poorer performance norms for the SSBNs deployed in the safe bastion modes, such a compromise is considered unacceptable in the case of SSNs where high speed manoeuverability and frequent need for power surges is intrinsic to its mission profile. Any such compromise in performance criteria could mean the difference between success and failure of the mission.

Further, in view of the enhanced projected holding of SSBNs and SSNs likely to be in service, there is a need for the IN to relook at the inventory of enriched fuel for the PWRs in service and to enforce accountability, take charge of the inventory control mechanism giving due consideration to the lifetime requirements and war reserves. Corporate responsibility for technological management of the propulsion system including HRD, should rationally be that of COM and DME. They are the competent authority and professional institutions responsible for the induction in the first instance.