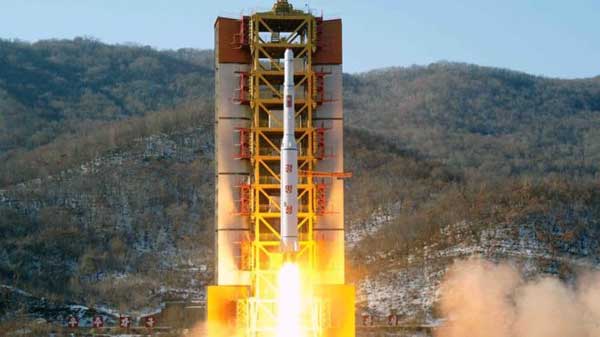 North Korea, described as a “rouge state” and “reclusive kingdom”, has done it once again. Defying the UN sanction and sparking widespread global revulsion, North Korea claimed that on Feb.7 it successfully carried out a rocket test.

…this rocket launch could be a cover for testing a long range ballistic missile. Indeed, the US Strategic Command has claimed that it had detected a missile entering space.

North Korea’s National Aerospace Development Administration, which described this accomplishment as an “epochal event,” said a long range rocket successfully launched an earth observation satellite, Kwangmyongsong-4. Further, it stated that the satellite entered into its pre-designated orbit ten minutes after a smooth lift off of the rocket.

The political dispensation in Pyongyang was quick to state that the rocket launch was a legitimate exercise in the use of space technology for peaceful, civilian purposes. However, the South Korean Defence Ministry said that there was no immediate confirmation whether the final stage of the satellite carrying rocket stage has successfully achieved the orbit.

Incidentally, the last rocket launch by North Korea in late 2012 had put into orbit what was claimed to be a communications spacecraft. Commenting on Feb.7 North Korean space mission, David Wright, Co Director and Senior Scientist at the Global Security Programme noted, “If it can communicate with the Kwangmyongong-4, North Korea will learn about operating a satellite in space. Even if not, it gained experience with launching and learned more about the reliability of its rocket systems”.

An unrepentant North Korea also stated that the country would continue to launch rockets carrying satellites for civilian applications. As expected, the US has called for a tighter and sterner sanction regime against North Korea in the after math of the rocket test.

For India the reason for worry is that North Korea has lent support to Pakistan’s endeavour to build military missiles.

But then the hunch is that this rocket launch could be a cover for testing a long range ballistic missile. Indeed, the US Strategic Command has claimed that it had detected a missile entering space. On the other hand, South Korean defence set up has said that the rocket had put an object into space. This space launch, which was preceded by a January 6 nuclear test, claimed to be designed for hydrogen bomb, has in particular angered Japan, South Korea and US. And the UN Secretary General Ban Ki Moon has described North Korean space mission as “deeply deplorable”. Of course, China in a muted response expressed its regret over the North Korean action.

It is widely perceived that North Korean nuclear tests and satellite launches are meant to help bring the US to the negotiating table wherein North Korea can extract concessions. It is a moot question whether like Iran, North Korea would commit to scaling down and ultimately phasing out its military oriented nuclear-missile programme. In fact, sometime back North Korea had claimed to be in a possession of a ballistic missile good enough to hit the US shores. However, there is a serious doubt over North Korea’s credible ICBM (Inter Continental Ballistic Missile) capability, as it is, the North Korean claim of carrying out a hydrogen bomb test on January 6 has been met with concern and criticism from the global community.

All the efforts made so far wean this impoverished and poorly developed country away from its nuclear and missile development programme have ended up in failure. For India the reason for worry is that North Korea has lent support to Pakistan’s endeavour to build military missiles. Of course, North Korea Pakistan links have been surreptitious. In New Delhi, a statement from India’s External Affairs Ministry said “Our concerns about proliferation links between North East Asia and our neighbourhood are well known”.

As North Korea steadily and systematically boosts in nuclear and missile strike capability, there is a concern over the possibility of a growing strategic instability in North East Asia.

On the other hand, Pakistan is known to have supported the North Korean nuclear development programme. AQ Khan, widely hailed as the architect of Pakistan’s nuclear weapons development, had played a key role in facilitating the transfer of nuclear technology to Pyongyang. In late nineties, Khan is known to have travelled to Pyongyang frequently, offering the elements of the classified centrifuge technology for uranium enrichment. Way back in 2004 Khan in a televised confession had spoken about his involvement in the international nuclear trade without keeping the Pakistani government in loop.

Meanwhile, military experts point out that comparison of underground nuclear detonations over the past several decades suggest that North Korean claims on the first ever hydrogen bomb test on Jan.6 may be an exaggeration. For the seismic signals recorded from the North Korean nuclear blast was not strong enough to believe that it is a hydrogen bomb test. Incidentally, this was the fourth nuclear test by North Korea which South Korea described as a “grave provocation”. North Korea has justified its latest nuclear test saying that it was in self defence against the US having numerous and humongous nuclear weapons.” North Korea is also known to be working on the miniaturisation of its nuclear weapon so that they can be easily accommodated into military missiles.

As North Korea steadily and systematically boosts in nuclear and missile strike capability, there is a concern over the possibility of a growing strategic instability in North East Asia. Against this backdrop, US is considering sending a nuclear powered aircraft carrier to waters off the Korean peninsula soon to join the naval exercise being sponsored by Seoul.US has also said that it is in discussion with South Korea for the deployment of strategic weapons on the Korean peninsula.

…this remote sensing satellite of North Korea could provide this country a capability to keep a tab on the neighbourhood with a particular focus on South Korea and Japan.

Meanwhile, space experts have been quick to point out that the most recent North Korean satellite launch could be a stepping platform towards building a space based reconnaissance system. For this remote sensing satellite of North Korea could provide this country a capability to keep a tab on the neighbourhood with a particular focus on South Korea and Japan. Remote sensing and reconnaissance are considered two faces of the same coin. Today many civilian, earth observation satellites in operation are considered “free wheeling spies in the sky”. Evidently, like most other civilian remote sensing satellites North Korean Kwangmyongsong-4 was also said to be positioned in apolar orbit.

The no holds barred nuclear and rocket tests ordered by the North Korean leader Kim Jong Un, are said to be clever tactical ploy to divert the attention of the people away from the pressing problems of poverty, hunger and deprivation. But then for how long this strategy would succeed, none is sure.