No Peace in Palestine 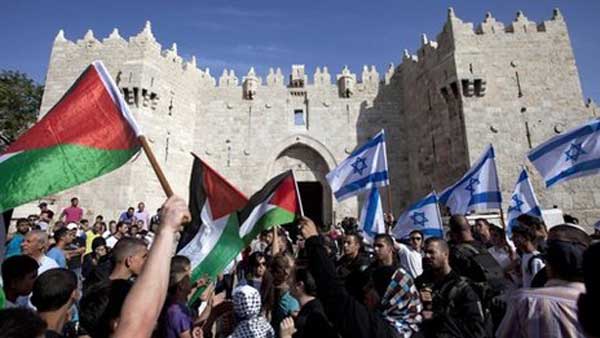 The recent rocket attacks from Gaza on Tel Aviv, no matter how “accidental”, are no excuse.  Coming on 52 years, now, Arab countries ganged up on Israel, forcing Israel’s hand against bellicose Arab neighbors and nations.   There was nothing less than Israeli and Jewish extinction on the agenda, as if that hadn’t happened before. Fighting with the wall behind their back, and pushed into a corner, Israel fought with tactical brilliance, outmaneuvering its enemies and capturing territories fair and square.  Besides, West Bank territories—and Jerusalem, Bethlehem, and Jericho, in particular—all the way to the River Jordan and Dead Sea—are Jewish lands since Biblical and pre-Biblical times.  You can forget the return of those holy lands.

In fact, the very recent promulgation by President Trump recognizing the Golan Heights as Israeli territory, further informs anyone that the Golan Heights are critical to Israel’s security.   No self-respecting nation – and Israel is no exception – can ever tolerate indiscriminate shelling by neighboring artillery on simple citizens living within artillery range.

Whoever gives up territories captured in war where a war has been thrust upon the winner?[1]  Has USA given up Okinawa? Has Russia given up the Kurile Islands? For what moral reason should Israel give up the West Bank when Palestine fails to even recognize Israel as a legitimate Jewish nation?  Even today, Iran vows to drive Israel into the sea.  Have you ever thought whether you would roll over if you were threatened with obliteration?  The Jews already had enough of that in the holocaust. I can assure you that hell may break loose, but Israel won’t ever give up the West Bank without security concessions, and then some.

Israel returned the Sinai to Egypt in 1982 after Egypt agreed to recognize Israel’s right to exist, and promised not to re-militarize the Sinai.  As a result, Israel’s southwest border has been peaceful ever since.  But in the West Bank and Gaza, Palestinians continue their unholy intifada against Israel, launching rockets and pelting Israeli Defense Forces with regularity.  The Palestine government gives a stipend to the family of every person who plants a suicide bomb among Jews.  With such laws in Palestine, it is impossible for Israel to grant concessions in the West Bank or Gaza.

Jordan, which lost the West Bank to Israel during the six-day war, saw the writing on the wall and sued for peace, recognizing Israel in 1994, followed by foregoing military posturing against Israel.  But not so 18 of the 21 members in the Arab League or another 10 members in the Organization of Islamic Cooperation, including so-called moderate Islamic countries.  How does their behavior advance the cause of peace?

Various opportunities for Palestinian self-rule have failed mainly because of refusals by the Palestinians to recognize Israel as a Jewish nation, assure the military security of Israel, or allow Israel the safety of Jewish holy sites and temples.  You tell me how safe you would feel if your neighbors were to look daggers at you and swear your extermination on a daily basis.

And, have you forgotten the contributions made to science by the Jews: more than 100 Nobel Prizes and Albert Einstein – plus the greatest gift of all to the Western World: Jesus Christ himself?  Israel– and Jews – need to be treated with respect.

Hence, pursuing peace in the West Bank and Gaza is an absolute waste of time under conditions that aren’t totally fair to all parties.  The one-sided condemnation of Israel by countries that simply follow a political agenda, often influenced by the wealth of the Arab nations, simply cannot buy righteousness and integrity. A peace that is only acceptable to the Palestinians is not a just peace.  Given the trend in the region, where neither the Palestinian Authority nor Gaza nor Israel can come onto the same page, there is zero expectation of lasting peace in Palestine.