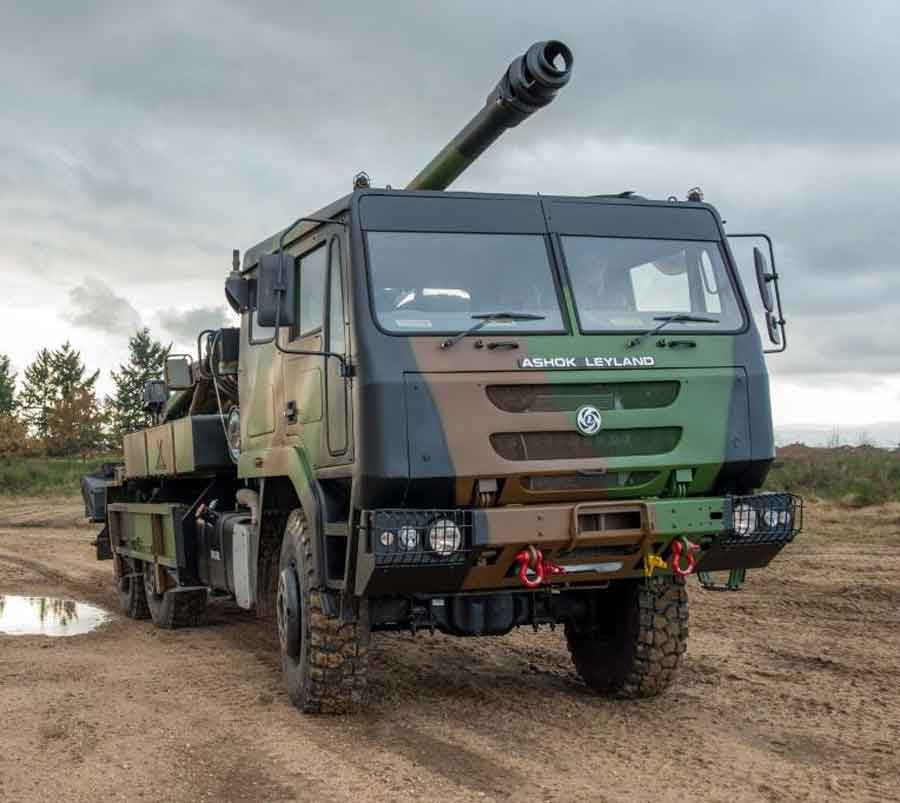 A Pre-Eurosatory press visit was organized by the Defence Industries of France from April 22 to 25, 2014. This visit was coordinated by the DGA and conducted by the Nexter Group. It gave an overview of the type of equipment and systems being fielded by the French companies in the fourth coming Eurosatory 2014. Some of the systems undoubtedly can be termed as the leaders in their respective category.  The cutting edge technology well integrated into creation of modular system, giving flexibility in operational employment and ease in maintenance was the order of the day.

The journalists from all over the world who came for this visit were taken to the facilities of Nexter at Versailles and MBDA at Robinson. Nexter highlighted its Ceaser 155 mm / 52 caliber Gun, VBIC Armoured Infantry Fighting Vehicles, AVARIS and 40 CATS.  They also show cased their capabilities in robotics. MBDA highlighted MMP fifth generation surface attack missile, MMP multipurpose combat vehicle and Multi Layered Air Defence Systems.

The next phase of the visit was to the Orleans Air Base and showed the Atlas A 400 M and SHORAD VL MICA integrated with C2 Air Defence system. The culmination of the visit was at the equipment display at military traning camp at Canjuers in Southern France. We were witness to the flying and versatility of Tiger attack helicopter and NH 90. The French Army displayed the range of Armoured  vehicles, there simulators and Artillery system. The journalists were given a chance to ride on these machines for the first hand feel. French Artillery gave a fire power demonstration by two Creaser gun systems. Other attraction was the Flien system, their future “Infantry soldier system”.

CAESAR is capable of supporting all types of motorized, mechanized or armored units, including rapid deployment forces.

CEASER 155 mm/52 caliber Artillery System’s key features are its multi-purpose employment, all terrain mobility, ease of implementation of fire plan, sustained firing capability and survivability. It is fully interoperable with NATO 39 caliber munitions. It meets the operational requirements, whatever the conflict level, theater of operation or nature of the forces involved thanks to its tactical mobility and maneuverability (6 x 6 truck chassis).

Thus, CAESAR is capable of supporting all types of motorized, mechanized or armored units, including rapid deployment forces. The CAESAR fire power is enhanced by its speed of response, longer range and its improved accuracy. CAESAR is effective in all combat missions, such as direct support fire, in-depth action fire, counter-battery fire and even coastal defense.

The VBCI is already in service with the French Army. It is a combat proven system with fantastic statistics from Afghanistan and Mali. The VBCI has an unrivalled overall survivability, it offers ballistic and mines protection, protection against IEDs, CBRN protection and soft-kill protection. it can be fitted with various medium calibre turrets. With its mobility performance, its exceptional maneuverability and its high fire power, the VBCI is remarkably efficient in combat. 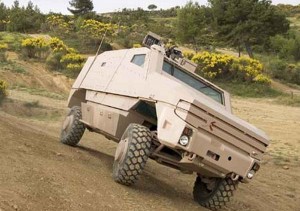 AVARIS is designed to cope with the increasing threat posed by improved IED, mines and more powerful kinetic projectiles, Nexter Systems has developed AVRAVIS, its multipurpose highly protected vehicle. SAFEPRO (an armour protection developed by Nexter Systems) is the core solution for the new family of ARAVIS. This multipurpose heavily protected vehicles is an ideal solution to defeat combined effects (blast and fragments of attacks) generated both by the IED, mines and AP carbide HMG bullets. ARAVIS family also offers the best proven mobility  solution and the operational advantages of versatility by design.

The 40 CTAS has been conceived as the next generation weapon of choice for medium caliber systems within Armoured Fighting Vehicles and Infantry Fighting Vehicles. The novel rotating breach technology and the associated cased telescope ammunition of the 40 CTAS is such that it is easily integrated within both manned and unmanned turrets with the benefit of minimum intrusion within the turret. The benefits are multiple in that the crew has greater space within which to operate, the unmanned turret has more space for additional equipments or better stealth profile, the vehicle having a more powerful weapon at its disposal than those with similar caliber equivalents. The 40 CTAS has been designed to provide a future proof capability against armoured threats, urban targets and soft targets in all combat theatres.

The range of munitions developed for the 40 CTAS has been conceived to provide the operators of medium caliber systems within Armoured Fighting Vehicles and Infantry Fighting Vehicles a wide range of capabilities with levels of performance above that from weapons of a similar caliber. The currently available ammunition types are: 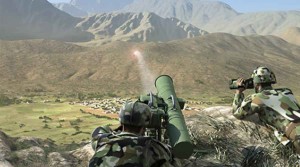 The main features of this system that categorizes it as a fifth generation surface attack missile system are as follows:

The fire and forget mode of the missile will help to reduce fire-control burden.

The MMP is designed to reduce the collateral damage risk. The missile is equipped with rapid reaction capability to respond quickly. It is capable of destroying new generation main battle tanks (MBTs).

The missile is designed to have a maximum range of 4,000m. It has an overall length of 13m, diameter of 0.14m, and weight of 15kg (inclusive of tube). The MMP missile is network centric warfare (NCW)-compatible. The fire and forget mode of the missile will help to reduce fire-control burden. The man controlling the loop and lock-on after launch (LOAL) modes improves the precision strike capability of the missile, which can even be fired from inside a building. The firing sequence of the MMP is rapidly repeatable.

The fire and forget mode of the missile will help to reduce fire-control burden. The MMP is installed with a multi-purpose tandem warhead. The warhead can penetrate 1,000mm of rolled homogeneous armour (RHA), and 2,000mm of concrete.

The MMP comes with a completely digitalized firing unit. The firing unit is fitted with a latest generation Band 2 infrared (IR) and also includes a day camera and laser range finder. It is also equipped with a GPS and magnetic compass for direction and guidance.

The firing unit weighs approximately 11kg (including tripod and battery). It works as an autonomous unit when installed with battery, but can be connected to an external power source if required.

The MMP is installed with a dual mode seeker (infrared and optical) to guide it towards the target. The missile is fitted with Micro Electro Mechanical Systems (MEMS) and inertial measurement unit (IMU) for calculating and reporting its velocity and direction. The laser range finder aboard the missile allows precise determination of the distance of the target. The missile is controlled by using the real-time data link. The MMP is powered by a two stage propulsion system. 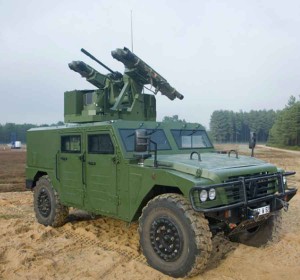 MPCV Multipurpose Combat Vehicle will be the new entry at the Eurosatory 2014. MPCV is the latest generation of high firepower weapon system, specifically designed to meet the most demanding requirements for both ground-based air defence operations at very short range. The mission function of MPCV is to provide air defence units with a weapon system combining high mobility, crew protection and high fire power. The system comprises a motorized turret mounted on an armoured vehicle.

The turret includes electro-optical sensors, a small calibre gun and 4 ready to fire missiles that can be operated from a firing console installed inside the vehicle. Integration of the weapon system has been tested / studied on a wide range of high-mobility armoured vehicles.  MPCV benefits from all the performance advantages offered by the MISTRAL 2 missile, most specifically its Fire-and-Forget capability as well as its ease of operation, high reliability and its unrivalled kill probability.

MPCV is MBDA’s response to today’s requirements for a weapon system that combines high fire power, short reaction time, day/night surveillance and engagement capabilities, tactical and strategic mobility, together with a high level of crew protection. 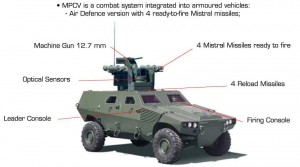 MPCV’s modular architecture allows the system to be integrated into a coordinated fire control network and to be part of a fully-digitised force. In addition to an autonomous IFF, MPCV uses a first class suite of gyro-stabilised electro-optic sensors, which includes TV and IR sights, laser range-finder and automatic tracker. The system can operate both day and night and fire on-the-move thereby enabling it to carry out convoy escort missions or to provide mobile protection of deployed mechanised / armoured units with an outstanding degree of effectiveness.

The system has been designed to minimize crew workload and facilitate long duration operations. It can be operated by one single soldier or by a two-man crew including a team leader. Moreover, it is completely operable from within the vehicle or, remotely, through a state-of-the-art fully mobile workstation, which can be installed in a building, a bunker or any protected place if static operations are called for.

This modular C2 system has been directly derived from the VL MICA system’s Tactical Operations Centre which was developed in close cooperation with French Air Force military experts. Its functions have been extended to include the control of multi-layered configurations combining MISTRAL and VL MICA GBAD systems as well as their integration within wider air defence networks. With PCP the structure and capabilities of a GBAD operational unit can be tailored in line with mission, terrain and air threat requirements. Depending on the tactical situation, the linking and coordination of up to eight V-SHORAD MISTRAL launchers or up to six SHORAD VL MICA launchers can be carried out. Alternatively, a combination of V-SHORAD and SHORAD systems can be also linked together, in this case comprising up to four missile launchers of each type (MISTRAL and VL MICA).