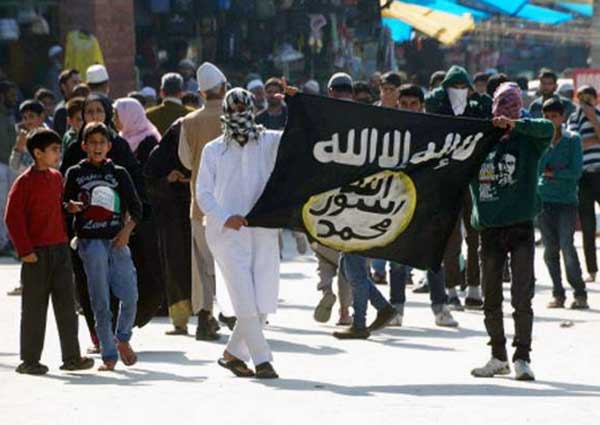 The advent of the Islamic State of Iraq and the Levant (ISIL) in Af-Pak has added a new, dangerous threat to Kashmir and contiguous areas. The continuous aggression witnessed at the LOC and daring attacks in J&K and Punjab by Pakistani terrorist groups show a new, aggressive posture of Pakistan. In future, war-hardened elements of the ISIL are likely to join forces with Pakistani terrorist groups to enlarge the war in Kashmir. A new face of local subversive groups, which appear well armed and highly motivated, is being presented to the public in Kashmir through videos and social media channels with a view to motivate the youth to take up arms against the government.

There are indications that a renewed and more vigorous sub-conventional assault by Pakistan in collaboration with ISIL irregulars may commence. India must anticipate the nature of the war that it may face in the near future.

The external and internal threats now overlap and have multiplied. We may face more lethal terrorist attacks from across the borders because of the growing sophistication of the techniques, equipment and technology and networking of indigenous terrorist groups. We are now facing greater danger to the country’s stability; the ongoing conflict is likely to grow in size and intensity with the ISIL joining the fray.

There is no change in Pakistan army policies towards India; the top brass, along with a crop of retired generals, still believes that India should not be allowed to live in peace till it is obliged to accept a solution to the Kashmir problem as demanded by Pakistan. Pakistan sponsored terrorism across the border so far involved small, well-equipped groups exploiting operational constraints of the Indian army to continue terrorism and subversive activities in Kashmir. Non-conventional war fighting techniques of these groups blurred the lines between war and peace but failed to achieve any concrete results. There are indications that a renewed and more vigorous sub-conventional assault by Pakistan in collaboration with ISIL irregulars may commence. India must anticipate the nature of the war that it may face in the near future. To meet this new challenge, it may be necessary to reassess and review the basic concepts and theories that have underpinned the doctrines of fighting Pakistan sponsored terrorism so far.

The exact nature, forms and contours which a covert war can take in the developing security environments in South Asian region are still by and large obscure. The dynamics of Pakistan’s emerging strategies can be anticipated and pre-empted, but the course of well-designed, covert warfare in collaboration with the ISIL may not be easy to discern. The Pakistani-ISIL onslaught can pose multiple threats, ranging from persistent mass terror attacks to creeping, low-intensity operations supported by subnational ethnic or religious entities within our country. It should be noted that the kind of war that the ISIL is waging in West Asia does not have high-profile military leaders or conventional combat units but large, loosely organised groups operating with the assistance of certain local groups.

Subversion of loyalties of the vulnerable groups, religious indoctrination and efforts to polarise the society will form an intrinsic part of the divisive campaign by Pakistan and the Islamic State and its confederates in India.

Large numbers of non-state actors operating at the behest of Pakistan may soon assume the shape of a prolonged armed conflict in Kashmir and some other parts of India. The terrorist attacks, combined with internal disturbances, will be with the aim of eroding and disturbing the economic, sociocultural and political foundation of the country. Subversion of loyalties of the vulnerable groups, religious indoctrination and efforts to polarise the society will form an intrinsic part of the divisive campaign by Pakistan and the Islamic State and its confederates in India.

In this kind of war, a tailor-made mix of military and political forces and multifaceted action plans will be required to counter Pakistan and ISIL plans. Quite obviously, the potential of conventional forces against an enemy that employs unfamiliar strategies is rather limited. Situations created by a combined use of sabotage, subversion, terrorism and insurgency by Pakistan and the ISIL will be far more difficult to contain or defeat. A covert war waged through non-state actors, fanatics and extremists supported by technology experts operating through secret networks based within the country has the potential of destabilising the country in the long run.

Terrorism, due to its devastating impact, has become the most visible part of proxy war in Kashmir, but Pakistan has realised that terrorism will not suffice to dislodge the elected governments in J&K or bring the administration to a grinding halt. Pakistan has, therefore, opened a new front in Kashmir in the last few years. It has inducted a large number of Wahhabi preachers who have been spreading the Wahhabi creed across Kashmir, calling on Kashmiri Muslims to give up their Sufi culture and return to “true” Islam. They now claim to have over a million followers in Kashmir. Actually, this movement may be the vanguard of ISIL infiltration.

The greatest danger to the country is not posed by sponsored terrorism but by this new phenomenon in the form of simmering unrest created by the Wahhabi movement.

The rise of this dogmatic Wahhabi culture poses a more serious threat to the secular government of Kashmir than many decades of sponsored terrorism. Islamic radicalism is bound to lead to sectarian violence and domestic chaos in most parts of J&K sooner than later. Pakistan hopes Wahhabism will lead to a larger struggle against India and the dominance of Pakistan-based jihadist movement will increase manifold. Without a vigorous countermovement led by the secular forces in Kashmir, the Sufi culture cannot hope to beat back this onslaught in an age when religious satellite channels constantly beaming their messages. Although Pakistani-sponsored Wahhabi movement is unlikely to get active support of a large segment of the population of Kashmir, most groups will require help to prevent being coerced into joining the radical movement.

Pakistan is now likely to focus on fomenting religious and ethnic unrest in the valley, making full use of new technologies, stealth, surprise and deception to keep the pot boiling. If it succeeds in gaining and sustaining support of the local population, it will be able to infiltrate larger armed groups and use the local population as a shield to operate from thickly populated areas and big towns.

Civil unrest, combined with the armed action of radical groups, may assume dangerous proportions if innovative and effective methods are not adopted by the government of the day to win over the local population. The greatest danger to the country is not posed by sponsored terrorism but by this new phenomenon in the form of simmering unrest created by the Wahhabi movement. This new technique of spreading disorder and chaos in Kashmir by Pakistan will be facilitated in the absence of strong and resolute political leadership and close coordination between the centre and the state government.

One thought on “New Jihadi Threats to India: Changing Dynamics of Proxy War”