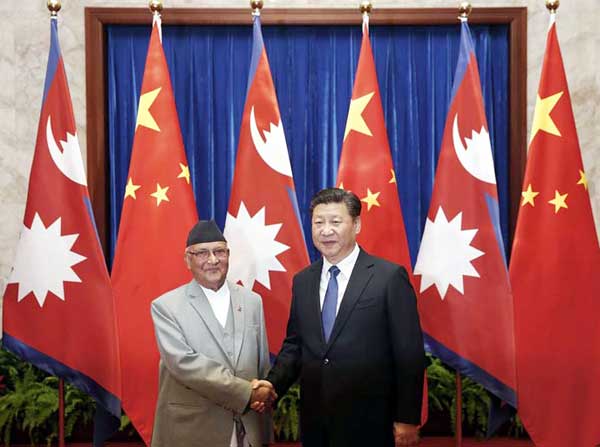 Post the recent visit of Chinese President Xi Jinping to Nepal on October 12-13, a news item titled ‘Xi Jinping Defeated in Nepal, Threatens to Smash Opponents into Pieces’ created quite a flutter.  It elaborated that Xi wanted to sign an extradition treaty for Tibetan refugees in Nepal which Nepal refused and Xi had to be content with a Pact on Mutual Legal Assistance in Criminal Matters. Speaking in Kathmandu, Xi referring to Hong Kong had said that “anyone attempting to split China in any part of the country will end in crushed bodies and shattered bones.” He added that “those who engage in separatist activities in any part of China will be smashed into pieces.” Xi was the first Chinese President visiting Nepal after 1996. Nepal’s Prime Minister KP Sharma Oli is a member of Communist Party of Nepal. The Chinese media remained mum on the extradition treaty issue.

Xi’s threat of “crushed bodies and shattered bones” no doubt was also a signal to Tibetans but if Xi really wanted Nepal to sign extradition treaty for Tibetans, loose ends would have been tied up months in advance. But why would China want such a treaty during Xi’s visit (not later when it swallows Nepal more comprehensively) when Nepal has on the quiet been handing over Tibetan to China over the years identified ‘dissidents’ by Beijing.

The China-Nepal joint statement reads that the Nepali side agrees Taiwan and “Tibet affairs are China’s internal affairs, and the determination on not allowing any anti-China activities on its soil.” Some 20,000 Tibetan refugees in Nepal with 9000 in Kathmandu alone have been living under severe curbs, not even permitted to celebrate the birthday of Dalai Lama in befitting manner. Alice Wells, US Acting Assistant Secretary of State for South and Central Asia recently told the Subcommittee on Asia Pacific that Nepal’s government has increased restrictions on the Tibetan Buddhist community amidst growing Chinese influence in the country.

Signing of the China-Nepal Agreement on Boundary Management System, to improve the level of boundary management and cooperation for both sides was another significant development, as was the Treaty on Mutual Legal Assistance in Criminal Matters, expressing hope for an early conclusion of the Treaty on Extradition. These agreements touched on border management, supply of border security equipment, mutual legal assistance, and collaboration between Nepal’s Attorney General and his Chinese counterpart. Expanding engagement between the police forces, intelligence agencies, border management organizations and law-enforcement authorities of the two nations signifies deepening of bilateral security cooperation.

Other agreements focused on investments and strengthening partnership with government bodies including the Ministries of Home, Foreign Affairs, Physical Infrastructure and Transport, Agriculture and Livestock Development, Industry, Commerce and Supply, and the Kathmandu metropolis. Xi also promised construction of the Rasuwagadhi-Chhare-Kathmandu tunnel and upgrading of the Araniko highway. Nepal is to establish a Consulate General in Chengdu, Sichuan Province of China.

If there was little mention of Nepal-China defence cooperation during Xi’s visit, China announced on October 21 that China will give the Nepalese Army $21 million in unspecified “disaster relief materials” to boost its  disaster relief capability.

The agreement on disaster relief was signed between Nepal’s Defence Minister Ishwar Pokharel and China’s Defence Minister Wei Fenghe during Pokharel’s visit to China. This in turn will boost operational capabilities of Nepalese Army also.  During his visit, Xi pledged $500 million investment in Nepal. Recall during his visit to Bangladesh in October 2016, Xi had endorsed 27 MoUs totaling $ 13.6 billion investment. China’s strategy of pulling nations into its gravitational pull is comprehensive that gradually increases its hold over them.

Nepal has also received US$ 500 million under America’s  Millennium Challenge Cooperation (MCC) for enhancing connectivity by increasing availability of electricity, lower transport costs. Nepal was to start implementing projects under MCC from September 2019 but as of August 2019 Nepal fulfilled only two preconditions out of the six laid down by MCC.

The two preconditions met are declaring the Electricity Transmission Project as national pride project and passage of legislation to create an Electricity Regulatory Commission. The ones  not met relate to ratification of the Compact agreement by the Parliament; signing of the project implementation agreement and the completion of a plan in agreement with India for  cross-border transmission line from Butwal to Gorakhpur in India. The projects must be executed within five years or else MCC will withdraw the assistance. China would perhaps want the MCC agreement to lapse and step in itself.

China’s strategy of ‘assimilating’ a country is unique and perhaps similar to the organism showcased recently by a Paris zoo;  a slime mould, dubbed the “blob”, a yellowish, unicellular, small living being which looks like a fungus but acts like an animal. China’s strategy of ‘deep coalitions’ acts like an all encompassing fungus that suffocates the target gradually till it is consumed without the victim realizing.

The kill is planned over decades, the book ‘The hundred-Year Marathon – China’s secret strategy to replace America as the global superpower’ being one example. If India was content over its ethnic and religious links with Nepal, China unleashed the Maoist insurgency in Nepal in the Mao Zhedong era itself to install a regime in Kathmandu not friendly to US and India. After 19,000 plus Nepalese killed in civil war and 100,000-150-000 internally displaced, finally China managed to combine two Communist parties of Nepal and install the government it wanted in Kathmandu.

By 2014, China had already overtaken India as Nepal’s biggest foreign investor, funding power plants, noodle factories and meat-processing units. Nepal’s commerce with China has outpaced that with India by 17 times since 2006. During 2015, Nepal endorsed FDI proposal worth $360million by China to establish a cement plant in Nepal – largest single FDI by China then. Yet India made the strategic bungle in the four-month long blockade on the Indo-Nepal border that began immediately after Nepal adopted a new Constitution on September 20, 2015. The flow of goods and fuel to Nepal was choked at border check points, pushing Nepal more into Beijing’s arms. This, despite India’s stated policy of ‘Neighbours First’.

Significantly, China had begun construction of a 770 kms connecting Tibet’s capital Lhasa with the Nepalese border town of Khasa, connecting Nepal to China’s wider national railway network as early as 2007-2008.

Skeptics in India have been writing past year about higher costs of Chinese goods reaching Nepal (compared to India) over the trans-Himalayan Multi-Dimensional Connectivity Network (MDCN), because of long distances. Such issues would be part of Beijing’s calculus and China’s $14 trillion economy will be used given the strategic importance of Nepal.

Not only will the MDCN connect Kathmandu to Tibet in record time, Chinese investment in Nepal’s three North-South Economic Corridors implies that road communications along these corridors will be widened and bridges upgraded to facilitate tank move (akin to the CPEC) leaning on to the Siliguri Corridor through the Terai region where China already has oil drilling contracts.

China would aim to connect with Bangladesh through India’s rail-road network and work towards a regime in Bangladesh sometime in the future that turns anti-India and aligns with Beijing and Islamabad.

China’s is employing hard and soft power to assimilate Nepal. This includes psychological conditioning through scholarships, training, Confucius Institutes, people-to-people engagement, Maoism, political warfare and buying politicians. The China-Pakistan sub-conventional nexus has also made surreptitious inroads in Nepal where organizations like the Tehfuzul Madrasa provide safe houses that Pakistan’s ISI and LeT has been using for sleeper cells for targeting India; lie low, regroup, arrange material and funds before undertaking activities in India through the open Nepal-India border.

Pakistani Prime Minister SK Abbasi’s visit to Nepal in early March 2018 needs to   be seen in context of not only a well-oiled network in Nepal giving protection to ISI-backed terrorists, but Nepal becoming a “Control Centre” as assessed by our Intelligence Bureau. Hopefully, the PMO and MEA have been taking cognizance of these developments which have grave geostrategic implications for India.