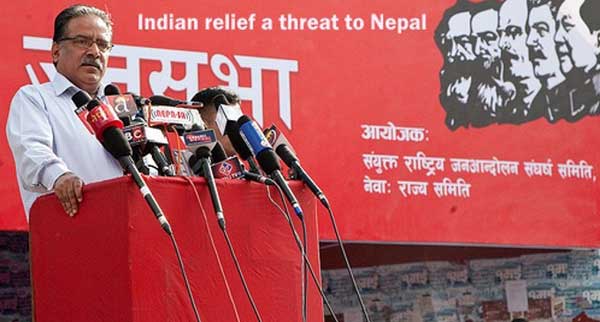 About 27 districts east and west of Kathmandu have been hit by the earthquake. More than 10,000 people have lost their lives. It will take an estimated $10 billion to rebuild Nepal. This earthquake was sort of double blow to Nepal. The Maoists struck Nepal in the 90s from which the country had not even begun to recover. Both nature and Maoists have been unkind to Nepal.

It may be mentioned that in 1934 earthquake the epicenter was in the Eastern Nepal and Kathmandu suffered extensive damage, but like now, the presiding deity of Pashupatinath was unhurt. The causalities in that earthquake were between 10,000 and 12,000.

Nepal, since 90s, has not been allowed to realize its economic potential owing to Maoist insurgency and political instability due to the intransigence of the Maoists. The recent disaster has dealt a severe blow to Nepal’s economy, which was already suffering. Nepal’s per capita spending is the lowest in Asia barring Afghanistan. Nepal ranks 145 on the UN’s Human Development Index. Remittances, which account for 29 percent of Nepal’s GDP has been the economic oxygen to the country. This however is temperamental. Tourism, which employs half a million Nepalese will take a long time to recover.

The Maoists who claimed to fight for the liberation of the people from monarchy and the bourgeois displayed total apathy when the earthquake disaster hit Nepal on 25 April 2015. The Maoist cadres including the Youth Communist League (YCL) were nowhere to be seen. The diabolism of the Maoists reached nauseating levels when Prachanda declared: “Indian help will destroy Nepal”.

Reportedly, Maoist leaders Prachanda (UCPN-Maoist) and Mohan Baidya (CPN-Maoist) raised the issue with the Prime Minister of Nepal at the all-party meet. They averred that India’s relief offers in the vicinity of country near the Northern borders would undermine Nepal’s relations with China. They underscored that India was posing a national security threat through its disaster relief intervention.

While the whole world praised India’s unprecedented response in reaching out to Nepal, there was not a good word from the Maoist leadership. Even India came in for praise from Pakistani PM Nawaz Sharif.

Following Prachanda’s remarks, the Maoists embarked on a despicable and callous campaign against India. Some 70,000 tweets hash-tagged #Indianmediagohome were orchestrated. Anti-India commentsand those praising Pakistan and China rescue efforts were orchestrated in Facebook as well. Nepalese journalists owing allegiance to the Maoists put loaded and mischievous questions to the Nepal Army Chief General Gaurav Sumsher Rana about ‘reports’ alleging the Indian helicopters making forays into the sensitive Nepal-China border with ulterior motives. There is a sizeable pro-Maoist, pro-China segment amongst the academia and the media in Nepal. This constituency in concert with the Maoists of Nepal went on an overdrive to decry India’s outreach, as if they were waiting for the first salvoes to be fired by Prachanda.

This Maoist orchestrated campaign reached such a pitch that the Indian Embassy in Kathmandu was compelled to issue a press statement that Indian teams were working in accordance with Nepal Government’s instructions.

‘India will make all efforts to wipe the tears of every person in Nepal, hold their hands and stand with them’, said Prime Minister Narendra Modi in radio broadcast.

The Maoists served as an effective leverage for China not only to influence the politics of Nepal but also carryout anti-India and anti-US activities.

The Prime Minister of Nepal Sushil Koirala said: “We are really blessed to have neighbour like India”.

Ambassador designate to India Deep Kumar Upadhyay said: “We do not have words to thank Indian government for its help in such a difficult time. Though many countries have now extended their helping hand, but quick and effective help from India will be remembered forever”.

The recent earthquake in Nepal also exposed the vicious anti-national side of the Maoists. While the whole world praised India’s unprecedented response in reaching out to Nepal, there was not a good word from the Maoist leadership. Even India came in for praise from Pakistani PM Nawaz Sharif.

China and Rise of Maoists

The Maoists in Nepal owe their rise to China. Till the assassination of King Birendra in June 2001, Maoists though China’s armed leverage in Nepal, did not enjoy monopoly over Chinese indulgence. The Chinese leadership was not averse in doing business with the monarchy to the extent it facilitated the growth and expansion of the Maoists. Once the monarchy became obdurate and reached its limit of yield, the Chinese and the Maoists colluded to obliterate the institution itself. They reckoned mere end of monarchy would not be enough, as the institution given its role in creating the nation would reassert itself. Hence, the palace massacre of King Birendra and family members.

The Maoists have ensured that Nepal is without a Constitution since 2008.

Consequent to the massacre, the Maoists at the behest of China gradually transformed into a political entity without abandoning the guerilla moorings. The Maoists served as an effective leverage for China not only to influence the politics of Nepal but also carryout anti-India and anti-US activities. China, apprehensive about anti-China campaign by Tibetan activists in run-up to 2008 Beijing Olympics, was desperate to see the Maoists at the helm and thus nudged them towards ‘peace-talks’ and joining the interim government in 2007. Subsequently, the Maoists formed the government after winning the largest number of seats in the Constituent Assembly elections in 2008. In this entire endeavour, the leftists and Maoists sympathizers in India also played a critical role.

The Tibetan activists had started a vigorous anti-China campaign around the world, and Nepal, which borders Tibet, and has substantial Tibetan presence, became critical to the success of Beijing Olympics. Beijing had placed desperate premium and prestige on successful conduct of games to showcase China as a prosperous and reckonable power. The rise of the Maoists therefore must be seen in this backdrop. Assisting them in this rise are also Church organizations of Western countries that employ ultra-leftists as a useful tool to disabuse non-Christians of their religious and cultural past so as to prepare the ground for conversions.

Ironically, the epicenter of the earthquake in Nepal was in the mid-western region of the country, which was also the epicenter of Maoist insurgency. Much of Nepal’s unpreparedness to deal with the humongous humanitarian crisis was due to political instability, thanks to the Maoists, who have made the country not only unstable but insecure as well. The Maoists have ensured that Nepal is without a Constitution since 2008. Some people recall that in the 1934 earthquake, the response of the State was much better even with limited resources. One survivor of both quakes quipped: “we used to have one King alone and he might have come and helped us. Now we have 601 Kings and none of them help us at all”. He was referring to the 601 members of the present Constituent Assembly.

The conversion business has been spearheaded by some European countries that tacitly supported the Maoist insurgency.

Mid-Western Nepal, the epicenter of the earthquake has also been serving as the epicenter of proselytization by the Church ever since the Maoists declared Nepal a ‘secular’ country without consulting other political parties. It may be mentioned that the Constitution of 1990 proclaimed Nepal to be a ‘Hindu Rashtra’, Hinduism was not the state religion and people belonging to other religions were free to follow and practice their faith, however, proselytization was not permitted.

Prior to the earthquake widespread proselytization was reported from the districts of Nuwakot, Dhading, Gorkha, Lamjung, Kaski, Miagdi, Rukum and Chitwan districts. New Churches had sprouted all over the countryside. Blandishment provided by the Church in effect was creating a deep divide between the people and the converts. The conversion business has been spearheaded by some European countries that tacitly supported the Maoist insurgency.

Since 2011, an estimated 2.5 lac people have been converted in Northern Nepal, and has been causing social tensions. Therefore, the link between the Maoists and the Church as in the case of India becomes very evident. The Maoist – Church combine is likely to go on an overdrive in the rehabilitation phase not for any altruistic reasons but with political and religious motives.

Mid-Western Nepal before it witnessed tectonic shifts resulting in country-wide physical disaster was also being subjected to societal and emotional disaster wreaked by the Maoists and the Church.

Indians engaged in rescue mission were sought after by the people in Nepal not only because of the commonality of language but meeting of hearts, which the Maoists have tried to prevent all through their disgraceful existence.

Even as the death toll was mounting and dead bodies were being recovered, the Maoist leadership displayed their ugly, callous and anti-national face. Their anti-India and pro-China politics has been worse during this crisis. Undoubtedly, China has made heavy political and economic inroads into Nepal, in terms of infrastructure and political leverages. Significantly, Nepal’s imports from China grew by 67 percent between 2010 and 2013.

China however cannot supplant historical, social and religious bonding that India has with Nepal. The inability to factor this truism is the main failing of the discredited Maoists.

Marx and Mao can cause conflicts but can never unite as does Pashupatinath.

When tectonic plates shift in Nepal, the impact is invariably on India too. It has happened now and it happened in 1934, when India too suffered more 7,000 casualties. Even in the recent disaster, if Kathmandu suffered, Delhi too was physically shaking. This is the symbiosis of India-Nepal relations. The reason that Indians engaged in rescue mission were sought after by the people in Nepal not only because of the commonality of language but meeting of hearts, which the Maoists have tried to prevent all through their disgraceful existence.