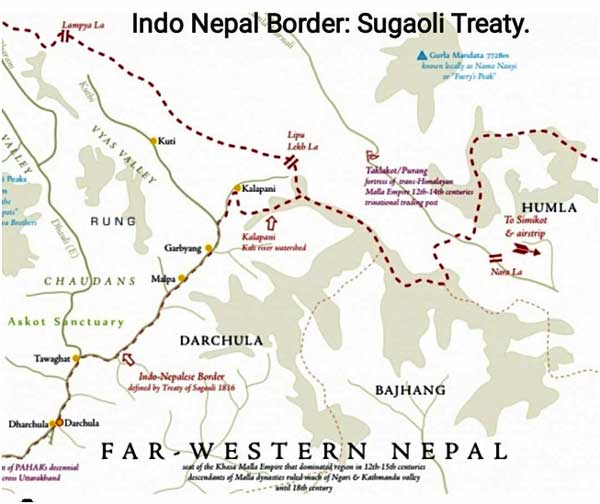 The communist government of Nepal has gone ahead at effecting constitutional amendment in the map of Nepal with respect to Kalapani area on its western border. It has followed up its cartographic jugglery by engaging with China on 20 June in virtual workshop through the instrument of communist parties of the respective countries.

These provocative initiatives by the Nepal government are at a time when the standoff between India and China is increasingly becoming intractable.

Amongst others, the workshop was attended by Prachanda and Deputy Prime Minister Ishwar Pokhrel. These provocative initiatives by the Nepal government are at a time when the standoff between India and China is increasingly becoming intractable. The dispensation has displayed total lack of sympathy for martyrdom of 20 Indian Army personnel in Ladakh.

The present communist dispensation in Nepal is unambiguous rather brazen in its preference for its communist comrades in China over India. It is by design constricting the space for natural bonhomie between the people of India and Nepal evolved through centuries.

If the Nepal Communist party persists with the Chinese scripted strategy, India should be prepared for further stabs on the back. It is not without historical precedence, this happened during the Indian War of Independence in 1857. As a reward some Indian territory in the Terai region were gifted to Nepal so that the country could have modicum of food security.

Similar gift had also given by the Treaty of Sugauli in 1816 after Nepal implored the British East India Company. So, historically, the Nepalese claim on Terai is untenable in several respects.

One of the sinister objectives of the Maoist insurgency in Nepal (1996 to 2006) was to rupture the centuries old Hindu umbilical between India and Nepal. In May 2006, the Interim government under Koirala, gave in to the Maoist blackmail, declared Nepal a secular country without public demand, or public sanction.

The Maoists were acutely conscious that as long as Nepal remained a Hindu entity it was impossible to turn Nepal into a communist state.

For centuries Nepal had been the only Hindu kingdom in the world. The imposition of the alien and western concept of secularism opened the hitherto closed, floodgates of Christian conversion. The Maoists were acutely conscious that as long as Nepal remained a Hindu entity it was impossible to turn Nepal into a communist state.

The kernel to the Hindu official identity was monarchy which the Maoists realized had to be destroyed by resorting to palace massacre, and the vestiges they reckoned, could subsequently obliterated politically. It exactly happened as per the script. It is this conspiratorial facet of Maoist-China partnership with respect to Nepal that should caution India.

For the sake of power, the Maoists of course then merged with the Communist Party of Nepal (UML) in 2018, which was christened as Nepal Communist Party(NCP). Yet, the Maoist faction continues to behave in a supercilious manner in matters of ideology, governance and in furthering China’s geopolitical agenda.

The Maoists treated both the monarchy and the Royal Nepal Army as inimical, and discredited and humiliated the latter institution on every possible opportunity. As a precondition for coming mainstream it inserted its indoctrinated and murderous cadres in the Nepal Army, some 6500 of them. In the process it legitimized the killing of 16000 hapless Nepalese citizens during ten years of insurgency. The Nepal Army resisted the induction of politically indoctrinated cadres, but the Maoist prevailed. The Maoist faction on several occasions has reiterated its agenda on structuring the Nepal Army on the lines of PLA to impart a communist character.

Hence, given the background, can the inputs from various authenticated sources be disregarded that the current Nepalese dispensation has agreed in principle to allow China to deploy 3000 PLA personnel in the Kalapani area in the garb of Nepal Army? This has the potential to alter the entire security and diplomatic paradigm between India and Nepal.

…the current Nepalese dispensation has agreed in principle to allow China to deploy 3000 PLA personnel in the Kalapani area in the garb of Nepal Army?

This comes in the wake of the visit by the Nepal Army Chief of the area. He was accompanied by the head of Nepal Armed Police Force, Shailendra Khanal. The Army Chief announced the creation of new border posts and barracks for the Army.

For centuries Hindu and Buddhist pilgrims have been going to Kailash Mansarovar. It is on this route that the famous Indian actress Protima Bedi had breathed her last. Though there are several passes between the Gangetic Plains and Tibetan Plateau, the Lipulekh Pass is however strategically most sensitive as it is in proximity to heart of India.

The amendment to the Constitution to adopt new political map was not guided by territorial imperatives but by exigencies of China’s strategic interests. It was a pay off by PM Oli to his Chinese masters. But for the intervention of the China’s ambassador to Nepal the ouster of Oli by several communist factions was a foregone conclusion. The ambassador convened meeting of the leaders of all factions in his residence and ordered them to continue with Oli. This was widely reported in the Nepalese media. It is a sad commentary on the Independence and sovereignty of Nepal.

The Maoist faction in Nepal dispensation has firmly associated itself with China’s hegemonic Belt Road Imitative (BRI) and rejected the US led Indo-Pacific strategy of which India is a part.

The preference for China centric unipolar Asia and China led global order is very clear. It has refused to ratify the United States Millennium Challenge Concept (MCC) 2017 agreement with the US by which the latter has offered USD 500 million grant for infrastructure development. This is the largest grant agreement Nepal has ever signed. The grant is to be spent on construction of 400 km of transmission line (Lapsiphedi-Galachi-Damauli-Sunawal) and maintenance of 300 km roads on East-West highway.

This is a new Cold War in full play in our Subcontinent. India by virtue of its geography is critical for both, the BRI and Indo-Pacific strategy.

It may be mentioned that the MCC was established in 2004 as the US Congress felt that the existing US aid programme were not delivering satisfactory results. Though their objective was poverty alleviation and economic growth, yet they failed to achieve decent targets because they were not predicated on free market policies and democratic principles of receptor states. Till now the MCC has approved $13 billion for 29 countries.

The Assistant Secretary of State, during his visit to Nepal in 2019 mentioned that the MCC was crucial to the Indo-Pacific strategy. Prachanda and his ilk in Nepal are flogging this statement to derail the deal. This is crass hypocrisy because the Belt Road Initiative (BRI) and the China-Nepal Economic Corridor not only has economic component but strategic as well. This is a new Cold War in full play in our Subcontinent. India by virtue of its geography is critical for both, the BRI and Indo-Pacific strategy.

Reality and facts fail to chastise the communists who are completely beholden to China that the Indo-Pacific strategy, by compulsions of maritime geography, is critical for the survival of Nepal. If Sea Lines of Communications (SLOCs) in the Indian Ocean and South China Sea (SCS) were to be disrupted by China, landlocked Nepal would be the worst affected as their outlet to sea is through India. It will imperil the existence of Nepal. In the larger strategic perspective, the military standoff between India and China is a contest between the Indo-Pacific strategy and the BRI, in which Nepal is being blackmailed to act as a Chinese pawn.

The virtual workshop between NCP and CCP therefore is a reminder to India as to who will be friends and who will act as enemies in a situation of India-China armed conflict.

3 thoughts on “Nepal inviting PLA on its Western Border”