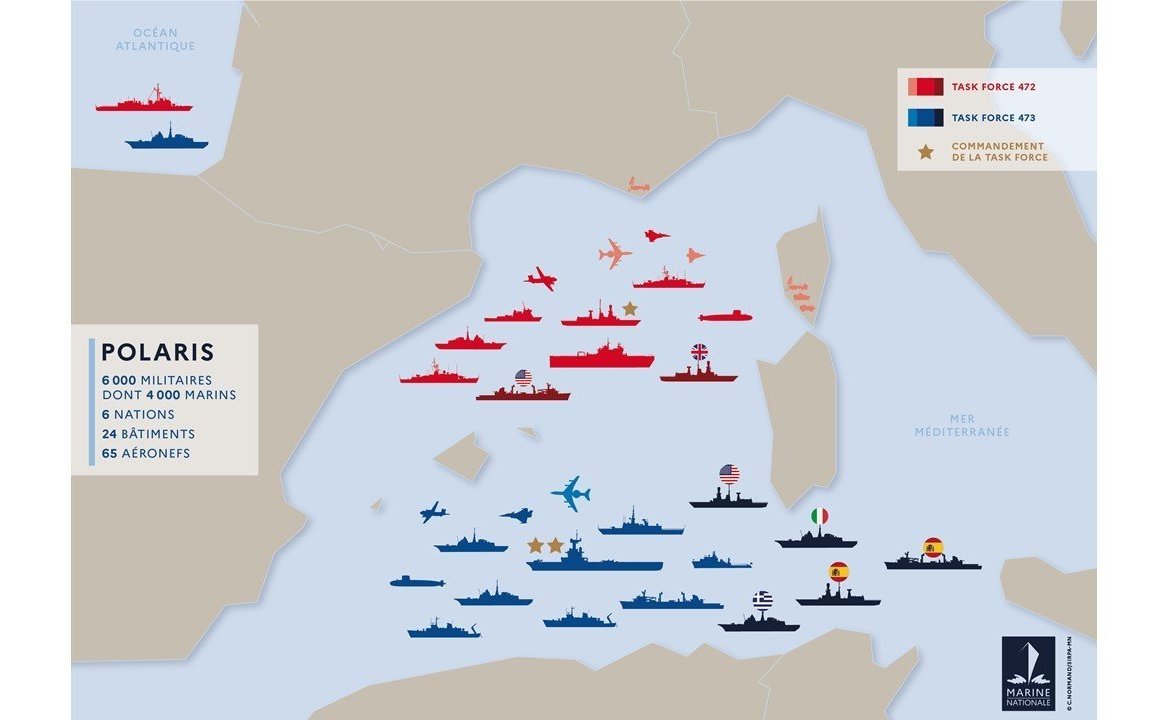 One of the largest French maritime exercises in the Mediterranean, POLARIS 21 (Préparation Opérationnelle en LutteAéromaritime, Résilience, Innovation et Supériorité), took place from November 18 to December 3, 2021 in the area west of the island of Corsica, between France and Spain. The exercise also included a segment on the Atlantic coast of mainland France.

POLARIS 21 was set up entirely in the context of operational preparation on several fronts and had a high combat intensity, which was fully in line with the strategic vision of the Chief of the Armed Forces and the Mercator Acceleration 21 plan of the Chief of Staff of the Admiral of the French Navy Pierre Vandier. In addition to naval warfare, the exercise also included the participation of many combat aircraft and surface-to-air defense.

Officially, the aim of the training was to test the capabilities of the sea and air elements to face future wars, using the latest systems and naval vessels to develop tactics. The scenario of the exercise was to “enable the Allies to maintain control of the Mediterranean in the event of threat from the Russian air force and navy“.

In total, the exercise saw the participation of 23 ships, one submarine, 65 aircraft and 6,000 personnel. Partner nations joining the exercise came from Greece, Italy, Spain, the United Kingdom and the United States.

Also, U.S. Sixth Fleet, headquartered in Naples, Italy, conducted the full spectrum of joint and naval operations, often in concert with NATO partners, in order to strengthen the power of U.S. in Europe and Africa.

The actual goal of the exercise

However, journalists came into possession of data related to the exercise POLARIS 2021. The data speaks clearly about the advance preparation of the NATO to enter into an armed conflict with the Russian Federation in the event of Russia’s intervention in Ukraine.

According to the legend of the maneuvers, it was determined that in response to the alleged Russian intervention, the forces of the NATO coalition would form and send an aircraft carrier strike group led by the Charles de Gaulle aircraft carrier to the combat area in order to “stop the invasion and preserve the sovereignty of Ukraine.”

The context and scenario of the “exercise“ (the consonance of the names of countries, settlements, the names of political figures, the specifics of maneuvers, etc.) became for the Russian Federation a signal of the real preparation of NATO to the start of hostilities against Russia, as it happened similarly to the operation of the United Defender alliance grouping of forces before the intervention in Libya (the exercises Baltops-2010 and Frisian Flag-2010), when, after the maneuvers at the sea ranges, a full-scale operation followed to overthrow of the legitimate government of Muammar Gaddafi.

POLARIS 2021 was also a demonstration of NATO support to Kyiv in the event of an armed conflict with Russia and was supposed to push Kyiv to start hostilities with the Russian Federation, after which the intervention of the NATO was supposed to take place.In principle, NATO was looking for an excuse to attack Russia, with the factor of surprise, so that Russia would not be ready with an adequate response.

In this situation, the preventive start of the Special Military Operation of the RF Armed Forces in Ukraine became the only possible response to the inevitable aggression of the Kyiv regime and the NATO.

One thought on “NATO planned a pre-emptive strike on Russia”