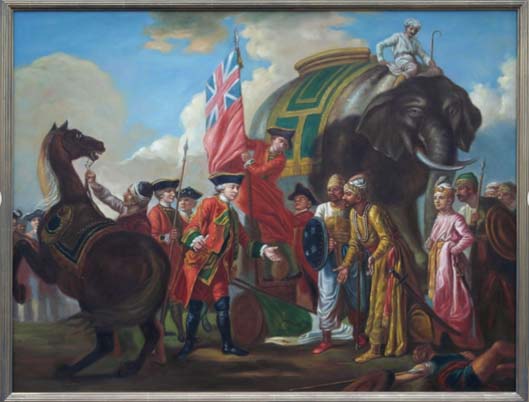 Clive and Mir Jafar after the Battle of Plassey

If there is one battle that impacted the future of an entire continent, it would easily be the Battle of Plassey, where victory was enabled through deceit and betrayal.Siraj-ud-Daulah’s military commander Mir Jafar betrayed his Nawab and succeeded him after the British victory in 1757, thus becoming a symbol of betrayal and treachery. An analysis of the important military victories in the world will tell us that alongwith technology and wealth, deceit and betrayal have probably been one of the largest contributors to victory, especially in  non-contemporary times when national security was viewed simplistically through the prism of such victories. Recorded Indian military history also supports this hypothesis, be it the Mughal conquest of the subcontinent, or the British, both of which are replete with examples of betrayals by our kin. A simple reading of such campaigns will tell you that the practitioner invariably incited  rebellions or assassinations, subterfuge or surrenders in opposing camps through promises of wealth, lands, titles, threats or blackmail and the practical manifestations were desertions, turning against your ally in battle at decisive stages, spreading disinformation to deceive the ally, enabling a split amongst the allies and so on. The corollary to this hypothesis is that the practitioners of deceit and betrayal in warfare would counter this and ensure protection through a strong network of agents, exemplary punishments and executions, religious sermons, invoking nationalism etc. In all such cases, history has shown the traitor to be corrupt, weak, disloyal, dishonest, malicious and obnoxious – basically lacking character. On the flip side, the strength of ‘British Character’, stood rock solid during the ‘Battle of Britain’ despite unremitting and destructive air raids conducted by the Luftwaffe during World War II thus enabling its final victory. Similarly, it is the Roman character which stood between defeat and victory during the Second Punic war, against the leading military genius of their times – Hannibal. The Roman willingness to sacrifice individual benefit for collective national good during the Punic wars enabled the empire to grow post the wars and reach its full glory.   The links between character and national security thus emerge quite vividly from the past.

Contemporary times, however, need us to study the subject of National Security and its link with ‘character’ differently, as warfare has evolved to the fourth and perhaps the fifth generation. Though names such as Marshal Petain of France and Vidkum Quisling, the Nazi nominated President of Norway, both Hitler’s collaborators come to mind and feature amongst the most notorious of traitors of the 20th century, the erstwhile manifestations of ‘deceit and betrayal’ are perhaps no more possible in the modern day states of today with their many checks and balances. In the 21st century, it has manifested in different forms just as National Security, which was earlier understood to be synonymous with internal and external security, now has a wider definition. The UN Office for the Coordination of Humanitarian Affairs (OCHA) has expanded it to include Economic (availability of livelihood options, poverty alleviation, and degree of control economic and financial decisions), Food (measures against hunger and famine), Environmental(measures against environmental degradation, resource depletion, natural disasters and pollution), Personal(measures against physical violence, crime, terrorism, domestic violence and child labour),Community (measures against inter-ethnic, religious and other identity tensions),Political (degree of political repression, human rights abuses and unlawful internal threats and external threats or pressures), Energy and Natural Resources security (degree of access to such energy resources as oil, gas, water, and minerals), Cybersecurity (degree of protection of the nations’ computer and data processing infrastructure and operating systems). Health (measures against disease, unsafe food, malnutrition and lack of access to basic health care).The current Covid-19 Pandemic will further reinforce this trend of expanding the definition of national security. There is, thus, a multi-ministerial context to National Security in contemporary times which earlier was mostly mandated to the Ministries of Defence and Home.

To draw further context, it is pertinent to draw attention to a few global indices. The Global Peace Index (GPI) published by the Institute for Peace and Economics, grades nations and regions based on levels of violence and insecurity. Typically, nations lower on the Index have poorly functioning governments, high levels of corruption, non-acceptance of rights of others and poor relations with neighbours. Iceland, New Zealand, Portugal, Austria, Denmark, Canada and Singapore top the list and are recognised as nations with sound citizen security. The Global Corruption Perception Index (CPI) published annually by Transparency International based on the perceived levels of public sector corruption assessed through opinion surveys by experts lists Denmark, Finland, Switzerland, New Zealand, Sweden, Norway and Singapore amongst the apex nations. Similarly, the annual Human Development Index (HDI) published annually by the UN is based on access to education, decent standard of living and life expectancy. The top nations include Norway, Ireland, Switzerland, Hong Kong, Iceland, Germany and Sweden amongst others. It is interesting  to note that more or less the same set of nations are at the top when these three indices are compared. Similarly, the same set of nations lie at the bottom – Somalia, Iraq, South Sudan, Syria, Yemen, Afghanistan Central African Republic and Libya. Coincidentally, India features at 141 out of 163 in both the CPI and GPI, while it is at 86 out of 179 in the HDI. A correlation clearly emerges from the above examination.

Let’s examine this phenomena from the point of view of India. Both the Global Corruption Index and the Global Peace Index place us towards the end of the ladder. To explore the aspect of ‘National Corruption’ and link it with ‘Character’, a brief examination of its contours is in order. In a SAGE Journal article of July 2008 titled ‘The Personality of Corruption: A National-Level Analysis’, the author’s research concludes that ‘Character’ at the national level has substantial relations with national level corruption and evolves along with the prevalence of virtuous acts in a society which is profoundly connected to institutional environments and incentive structures that derive from it. Thus, should a society be able to establish robust institutional environment and incentive structures, its character should also be robust. This allows us to hypothesize that our low rankings in GCI are a result of a weak ‘National Character’ duly enabled by our weak institutional structures and corruption enabling environment. Let us now co-relate this with some manifestations of how corruption and inadequate National Character impacts National Security with practical examples. Here one needs only cite the manner in which corruption is seen as synonymous with purchase of arms. Not only have foreign purchases of the past been mired in corruption, as witnessed in the Bofors and Augusta Westland Helicopters scandals amongst others, even public sector enterprises have been implicated – recall the arrest of the erstwhile Director General Ordinance Factory Board for accepting bribes from foreign arms companies and the Tatra Vectra BEML scam. Invariably such incidents, accusations and complaints have derailed and delayed modernisation of the Armed  Forces, adversely impacting national security directly. Corruption in defence extends to poor defence constructions as in most other public works where contracts are known to be awarded based on cronyism or different forms of compromise. Since Defence Technology constitute a key aspect of national security, our inability to develop a robust defence industrial base despite a large number of Transfer of Technology import contracts over many decades, can either be ascribed to incompetence, corruption or ‘rent-seeking’ by perpetuators who wish to retain statusqou.

Similarly, low character standards of our police and paramilitary forces results in trans-border smuggling of narcotics, arms and counterfeit currency which directly also impact national security. Further, such conduits are also used to enable passage of terrorists across borders as was suspected during the Pathankot Air Force Station attack. There is a daily diet of officials being implicated in corruption scams in the news. Thus, our banking sector is weakened by large NPAs due to bad loans where bank officials have been compromised, TV channels are implicated, fake Covid-19 reports issued, kidneys sold, fake educational certificates issued – the list is endless as most institutions seem to have been infected. Similarly crony capitalism has so severely crippled our economy that the rising GDP has been concentrated in the hands of the top 10 percent of our population, with the poor remaining in extreme poverty, thus adversely impacting the HDI and as a corollary, national security. Doubtlessly, crime statistics for 2020 when compiled will show an exponential increase as the unemployed and impoverished would have taken to crime to earn a living due to negative employment statistics, as entire sectors of the informal economy have been adversely impacted. Similarly, greatly enhanced discretionary powers to officials due to the pandemic, will also find enhanced white-collar corruption emerging. This is a new form of ‘warfare from within’ where citizens bring about defeat of their nation by this new form of deceit and betrayal. There is, thus, a dire need to recognise the scourge of corruption as a threat to national security and unless we strengthen our institutions to incentivise a strong character, the nation will remain insecure for as Mahatma Gandhi famously said, the life of the nation is secure only while the nation is honest, truthful, and virtuous.

The nation’s morals are like its teeth, the more decayed they are the more it hurts to touch them – George Bernard Shaw