There has been an unmistakable spurt in the development and acquisition of nuclear weapon capabilities by the Military Junta regime in Myanmar. Given the level of progress in this regard, it is reckoned by various agencies that this would be realized by the year 2014. The media in the Southeast Asian region is rife with insinuations that this project is in progress, in active collaboration with North Korea under the aegis of China.

The Association of South East Asian Nations (ASEAN) is seized of the matter. Recently at the ASEAN Regional Forum Meet at Phuket in Thailand in July 2009, the US Secretary of State, Ms Hillary Clinton voiced her concern over reports about military cooperation between Myanmar and nuclear armed North Korea. This statement should be viewed in the backdrop of the incident wherein a North Korean 2000-tonne freighter ‘Kang Nam-I’, allegedly carrying illegal cargo, and headed for Myanmar, was tracked in June 2009 by a US Navy destroyer USS John S McCain and was forced to reverse course, reportedly at the behest of China. UN Resolution 1874 permits North Korean ships suspected of carrying illegal cargo to be searched. North Korea conveyed that any such move would be considered as an ‘act of war’.

As far as transfer of nuclear and missile technologies is concerned, it has been the wont of China to supply them through their proxies like North Korea so as to deflect international opprobrium.

Since the year 2000, there have been reports about North Korean ships off loading construction and other material at Thilawa port in Myanmar. It is intriguing that these activities were taking place during the period when North Korea and Myanmar did not have diplomatic relationship since 1983, which was restored only in 2007. The relations between the two countries were snapped, following the bombing of Martyr’s mausoleum in Yangon by North Korean agents in an attempt to assassinate the visiting South Korean president, Chun Doo-hwan.

Since the restoration of diplomatic relations in 2007, there has been a flurry of secret visits by Myanmar officials to North Korea, which could not have been possible without a reasonable level of engagement and cooperation between the two countries during the so-called ‘diplomatic freeze’.  No sooner had the diplomatic relations been restored, a Myanmar delegation led by Lt Gen Myint Hlaing, the Chief of Air Defence, followed by another delegation headed by Lt Gen Tin Aye, Chief of the Office of Chief Defense Industries, visited North Korea. The composition of these delegations suggests that besides cooperation for procurement and development of conventional weapons, there are aspirations on Myanmar’s part to seek assistance in nuclear weapons and missile technology. If it was only conventional weapons, China is well placed to meet its requirements.

As it is Myanmar and China have thriving defence cooperation and more than 70 percent of Myanmar’s military arsenal is of Chinese origin. Moreover, North Korea lags far behind China in conventional weapon technologies. But as far as transfer of nuclear and missile technologies is concerned, it has been the wont of China to supply them through their proxies like North Korea so as to deflect international opprobrium. Pakistan is one such glaring example. 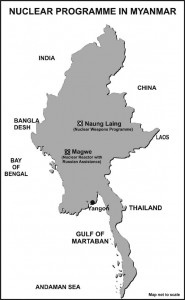 Sources have revealed that the Myanmar-North Korea rapprochement was painstakingly brought about by China. It is believed that when the Myanmar authorities approached China for supply of ‘howitzer guns’, the Chinese authorities expressed their inability on the plea of shortages, but said that the same could be obtained from North Korea in exchange for rice. During that period, North Korea was facing severe food shortages due to drought. At the behest of China, ambassadors of Myanmar and North Korea to Thailand met each other. The desperation on China’s part to facilitate the rapprochement process between the two internationally pariah nations, extremely close and beholden to China, is a pointer towards the evolution of a new Chinese strategy in the region.

It is believed that these secret delegations from Myanmar to North Korea had gone to seek further cooperation as part of the tunneling project already underway in a mountain complex (Setkhaya Mountains) in Naung Laing village in south east of Pyin Oo Lwin in Mandalay Division. The off-loading of a special construction material by North Korean ships on several occasions partially vindicates the belief. There are images available to suggest extremely large network of tunnels (some 800 in numbers) being excavated, apparently with the help of North Korea. The North Korean assistance is corroborated by the fact that Myanmar does not have tunneling capability. Meanwhile, Uranium is also being activated in at least ten locations. It may be pertinent to mention that the Kachin state of Myanmar is rich in Uranium, which reportedly in the past was being clandestinely excavated by Japan with the tacit indulgence of regional leaders during the period when the state was virtually out of control of the central authority.

The design of the reactor at Naung Laing, as sources reveal, uses water to provide carbon dioxide used in the cooling loop, and bears resemblance with the reactor at Yongbyon and the reactor in Syria, being constructed allegedly by North Korean assistance, which was eventually bombed by the Israelis in September 2007.

There are other indications with regard to Myanmar’s quest for nuclear weapons technology. Soon after Pakistan carried out its nuclear tests in May 1998, Myanmar’s Head of State, Senior General Than Shwe signed the Atomic Energy Law on 08 June 1998. The timing of this event clearly reveals a strategic pursuit with regard to nuclear technology rather than any benign designs of quest for nuclear energy for peaceful purposes.

Given Chinese strategic sensitivities with regard to Myanmar, such growing bonhomie between Pakistan and Myanmar cannot be possible without Chinese prodding and support.

Importantly, post 9/11, two Pakistani nuclear scientists, Suleiman Asad and Mohammad Ali Mukhtar took refuge in Myanmar in November 2001 when the US intelligence began to investigate the nexus between Pakistani nuclear scientists and the Al-Quaeda. This could not have been possible without intimate nuclear cooperation between the two countries, certainly with the tacit approval of China. The whereabouts of these two scientists is still unknown. It was alleged earlier that they were sheltered in the Muslim dominated area of Mandalay by the Myanmar authorities. There is not a word about them from the Pakistan authorities and even the US has become flaccid in its hunt for them.

The military government established a Department of Atomic Energy in 2001 under U Thaung, a known proponent of nuclear technology who currently heads the Ministry of Science and Technology. He made a secret visit to Pakistan, the chief agenda being nuclear cooperation. During the same period, in 2001, three Pakistani Naval vessels, i.e. a submarine, a tanker and a destroyer visited Yangon port. This was an unprecedented development, since till then, Myanmar had steadfastly maintained that it would not permit foreign naval vessels to visit the country’s ports. The goodwill visit by the Pakistan Naval ships was immediately followed by the visit of General Parvez Musharraf, the then Chief Executive of Pakistan. The Myanmar authorities, which met General Musharraf also included U Thaung.