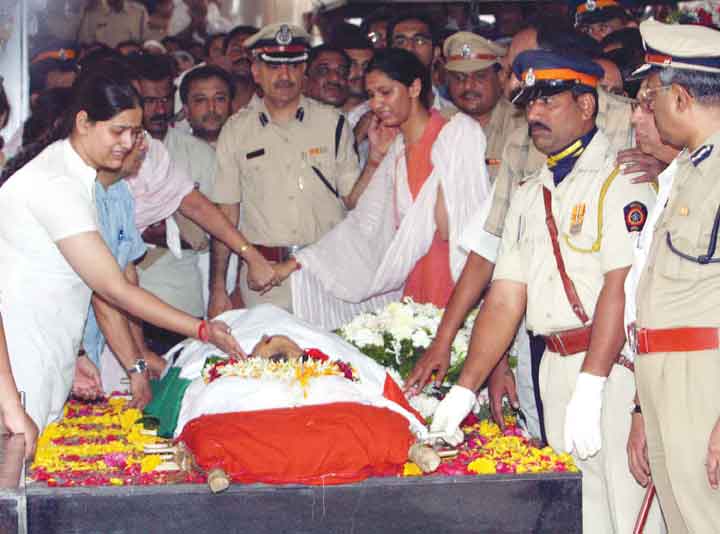 LeT was not immune from this trend toward fratricidal violence since its ranks included many former army personnel. Ex-commandos in particular, had long been regarded as prized assets owing to their combat skills. The LeT’s adoption of fidayeen tactics, in fact, had been driven by an ex-SSG Warrant Officer known as Abu Fahadullah. This former soldier joined the jihadists as a trainer in 1998 and was killed by Indian security forces in 2000. During his two years with the LeT, he revolutionised its operational doctrine. Having served with the SSG’s elite counter-terrorist team, Zarrar Company, he knew how conventionally-deployed military and police units would be trained to react to a terrorist attack.8 Accordingly, he devised an attack technique that left little scope for damage control, since it was focused on causing maximum death and destruction before security forces could respond effectively.

Just as elements of the ISI had developed jihadist sympathies during the 1990s, certain ex-SSG personnel too appear to have gone through an ideological transformation. Their involvement at the tactical level of many jihadist operations led to ‘reverse indoctrination’, as strong bonds developed between trainers and their students. By 2007, these bonds had resulted in the formation of a semi-rebellious movement within the mainstream jihadist industry in Pakistan. Spearheaded by former army personnel, the movement included ex-SSG officers such as Ilyas Kashmiri and Captain Khurram. Its adherents had grown particularly disillusioned with the leaders of LeT, believing that they were too loyal to the Pakistani state, which in turn, was beholden to the Americans. A silent mutiny was brewing and this deeply worried the LeT leadership.

Until April 2008, the LeT had conceived of its Mumbai attack as a limited operation, focussed on a single location. However, another development in that month might have caused it to drastically expand the scope of its plans. On March 26, 2008, Indian police raided a secret meeting of jihadists in the city of Indore. Within hours, they captured many leaders of an indigenous jihadist network, which was carrying out bomb attacks across the country. Being Indian citizens, members of this network were in a position to provide their Pakistani counterparts with much-needed operational support. The arrests in Indore, a triumph of Indian counter-intelligence, suddenly deprived Lashkar of a valuable partner. 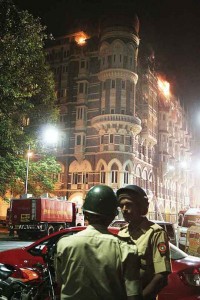 Whether the idea of expanding the scale of the Mumbai attack originated with Sajid Mir, or whether it was passed down by the Lashkar leadership, shall probably never be known. What is certain is that three months after the events in Indore, in late June 2008, Mir asked Headley to conduct reconnaissance of several additional targets in Mumbai. One of these was the Chabad House (better known by its local name of Nariman House).9 The building was specifically included because it would represent an attack on Israel, which was sure to bolster the Lashkar’s standing within the global jihadist movement and bring it recruits from within Pakistan and funds from overseas donors.

Planning for the Mumbai attacks had begun in April 2008, when Headley had identified a possible landing site for the attack team. Between April and July 2008, Headley cased out other locations across Mumbai, entering their coordinates into a Global Positioning System supplied to him by Sajid Mir. He would hand over all the information gathered thus to both, Sajid Mir and Major Iqbal. From Headley’s account of these events, it appears that Major Iqbal was kept fully informed of the planning of the attacks, but apart from issuing general instructions, left the tactical micro-management to Sajid Mir.

A Convergence Of Interests

The 2008 Mumbai attacks appear to have been a joint operation between two factions of the Lashkar that had been drifting apart due to policy disagreements. One was a ‘loyalist’ faction led by Sajid Mir; the other was a ‘dissident’ faction led by an ex-army officer named Abdur Rehman Hashim. The latter wanted to focus on fighting Western forces in Afghanistan and possibly, extending support to Taliban groups fighting the Pakistani state.

The Lal Masjid crisis had had an adverse impact on institutional cohesion within the Pakistani military.

Mir, on the other hand, was a house-trained jihadist who despite his global Salafi inclinations, was ultimately prepared to defer to the India-centric agenda of his controllers. Between them, the two Lashkar commanders agreed on an operation that would strike at Western interests within the operational framework already laid out by the Lashkar leadership. The Mumbai attacks, it was hoped, would reduce tensions within the group and unite its cadres through a common sense of purpose and accomplishment.

The role of the ISI in all this appears murky. Certainly, any proposition that the ISI was ignorant of the attack plan now appears nonsensical, given the evidence subsequently provided to investigators by David Headley. However, prior knowledge of the attack does not necessarily mean that the ISI actively facilitated it at all stages with the important exception of funding Headley’s reconnaissance trips to India. 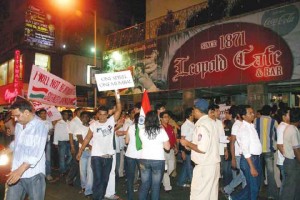 Thousands and thousands of Mumbai citizens gathered near the Gateway of India, December 1, for a protest rally in the wake of 26/11. A newly re-opened Leopold Cafe is in the background. (Photograph: Sanjay Sawant/rediff.com)

Rather, it would appear that the agency adopted a calibrated policy of ‘observation without interference’, having calculated that a Lashkar attack on India would serve Pakistani security interests admirably, in light of the Lal Masjid crisis. To quote Headley, “The ISI had no ambiguity in understanding the necessity to strike India. It essentially would serve three purposes. They are (a) controlling further split in the Kashmir-based outfits (b) providing them with a sense of achievement and (c) shifting and minimising the theatre of violence from the domestic soil of Pakistan to India.”10

Faced with an exploding security threat within Pakistani borders, the ISI had adopted an age-old counter-insurgency strategy. First identified by the French writer David Galula in his 1964 book ‘Counter-insurgency Warfare’, the strategy aimed to deflate the popular appeal of an insurgency by adopting the insurgents’ own political agenda.11 Galula had originally intended that this concept be applied within the context of the Cold War, where communist insurgents would claim that their rationale for seeking power was to improve living standards of the impoverished classes. He argued that if the government could adopt this rhetoric as its own, it could undermine the popular appeal of an insurgent group. Apparently, some individuals within the Pakistani intelligence establishment made a similar calculation during the tumultuous months following the Lal Masjid crisis.