Multi-Calibre Assault Rifle: Made in India vs Make in India

Aping the philosophy of the West, the Indian Army wanted a rifle that would incapacitate a solider instead of killing him thus increasing the logistics burden for each soldier injured. However, as the Army started getting involved in Counter Insurgency especially in the North, the requirement for a gun with a higher kill capacity was felt. The infantrymen now prefer the famed AK-47 rifle over the INSAS.

Braving all criticism of an inefficient INSAS rifle to its credit, unbelievably though, the ARDE has simultaneously developed a Multi-Calibre Individual Weapon System (MCIWS)…

Amidst media reports of the Indian Army scraping the search for a multi-calibre assault rifle from foreign vendors, a team from the Indian Defence Review (IDR) visited the Armament Research Development Establishment (ARDE) at Pune recently. It was an exercise undertaken to understand the efforts made by Indian scientists in developing an indigenous assault rifle; a call unheard thus far. The Indian Army is conducting field trials on various assault rifles of foreign make at Northern Command. The world famous small arms manufacturers have entered the fray.

Going by newspaper reports, the top-of-the-line assault rifles such as Beretta’s ARX-160 (Italy), Colt Combat Rifle (the US), CA 805 BREN (the Czech Republic) and Israel Weapon Industries (IWI) ACE1 model failed to make a mark owing to the unrealistic General Staff Qualitative Requirements (GSQR). However, these trials are still being conducted and no final outcome has emerged so far, a highly placed source at Army Headquarters informed IDR. The source negated earlier media reports that the army has scrapped its December 2011 tender to procure 66,000 multi-calibre assault rifles on June 15. Though the chances are high for abandoning this foreign dream, not for any other reasons hinting at a doctrinal shift but to save itself of the embarrassment caused due to the unrealistic expectations from its GSQRs, he added.

On the other side, braving all criticism of an inefficient INSAS rifle to its credit, unbelievably though, the ARDE has simultaneously developed a Multi-Calibre Individual Weapon System (MCIWS) as a technology demonstrator. The Indian Army, however, did not support this project and went ahead hunting in foreign lands for a dream assault rifle, thus ignoring the indigenous effort outright. 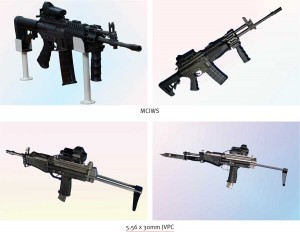 Notwithstanding the fact that the hardy Indian Infantry soldier’s torturous wait for a new-generation assault rifle may now get even longer; the movers and shakers remain unfazed, caught in bureaucratic tangles probably set up by the Army itself. India, under the new vigour for “Make in India” mission, may in all likelihood abandon its four-year-old hunt for new-generation assault rifles with inter-changeable barrels for conventional warfare and counter-insurgency operations. Will the Indian marvel in MCIWS see the light of the day? The trials will be followed keenly by the small arms manufacturers the world over.

The race for acquiring big-ticket weapons like fighters, helicopters, submarines, tanks, howitzers and the likes makes an assault rifle looks too small and may be unimportant as well. Advanced weaponry apart, infantry soldiers continue to be at risk without the basic modern bullet-proof jackets, webbing and lightweight ballistic helmets, terrain specific shoes and state-of-the-art field communication system – the fundamental right of a soldier.

India, under the new vigour for “Make in India” mission, may in all likelihood abandon its four-year-old hunt for new-generation assault rifles with inter-changeable barrels for conventional warfare and counter-insurgency operations…

In a country where the caste, creed and corruption form the backbone of our democratic system, the Indian Army cannot be kept isolated. No wonder, the 1.18-million strong Army’s quest for 66,000 new rifles for its 382 Infantry battalions becomes a super lucrative deal (an estimated $3 billion to $4 billion) rendering indigenisation unattractive. It should come as no surprise if probed, that there are forces supported by the politico-bureaucratic-military nexus serving the designs of the arms mafia, who deliberately want this indigenous effort quashed. It may be surprising, but not really though, that our scientists can develop and launch a probe to Mars but fail to produce an assault rifle.

According to sources in Army Headquarters, during the ongoing field trials, the double-barrel rifles of foreign make on offer – with a 5.56 x 45 mm primary barrel for conventional warfare and a 7.62 x 39 mm secondary one for counter-terror operations – have thus far not been found robust enough for the military operations envisaged.

Evolution of an Assault rifle

To understand the importance of an assault rifle it is essential to recall the developmental and operational history of the assault rifle. Getting to the history of automatic rifles; the USSR by the early fifties began to arm her infantry with intermediate-cartridge weapons (automatic and semi-automatic carbines, as well as Light Machine Guns). Full-power rifle cartridges were kept mostly for platoon-level medium machine guns, as well as for sniper rifles.

The NATO and many other countries such as India went the “full-power” road with adoption of the 7.62 x 51 NATO round, developed in USA. Despite all stubborn efforts of the US Army to prove that its choice of new round was the right one, practice of the time proved that it was not the case. Full-automatic fire from newly designed 7.62 mm NATO rifles was ineffective to say the least and many countries like India (7.62 mm SLR) adopted the new rifles as semi-automatics. And in semi-automatic fire, the long-range potential of the 7.62 mm NATO round was basically lost due to limitations of the iron sights and the eye sight of a typical infantry soldier.

In parallel, a lot of research was done to find ways to improve effectiveness of infantry fire. Not surprisingly, this research pointed out what was already known by 1918 – the capabilities of the average soldier in a typical combat situation limit effective rifle fire to 300-400 metres maximum.

This old finding, along with the new concept of the “burst” firing to achieve “shotgun effect”, in order to compensate for slight aiming errors resulted in a decision to decrease the calibre of the assault rifle from typical 7 mm – 8 mm down to about 5 mm – 6 mm or less. This decrease offered several advantages compared to standard calibre reduced power ammunition, including faster bullets with flatter short- to medium-range trajectories, decreased weight of ammunition and guns, and reduced recoil.

Several ambitious but largely unsuccessful programmes centred on sub-calibre flechette rounds, multi-bullet rounds, micro-calibre bullets (4 mm and below) and caseless ammunition. These were conducted in USA, Germany and elsewhere, but practical results were achieved only with conventional ammunition of .22” calibre (5.56 mm), developed in the USA during the late fifties in conjunction with the Armalite AR-15 / Colt M16 rifle.

This brought to life what could be called the third generation of assault rifles. Technically, these third generation weapons were automatic rifles or carbines firing reduced power, reduced calibre ammunition. Inspired by developments in USA, by the late seventies – early eighties this concept caught on both in the West and the East. NATO adopted an improved version of the American 5.56 mm cartridge as a next standard rifle ammunition in 1979 while the Soviet Army adopted its own version of the small-bore reduced power cartridge in the form of the 5.45 x 39 round in 1974 along with AK-74 rifle.

Today, forty or so years later, most armies of the world still use this “third generation” rifle ammunition (reduced power, reduced calibre) for standard infantry rifles and Light Machine Guns.

Today, forty or so years later, most armies of the world still use this “third generation” rifle ammunition…

Basically, rifles designed in 2015 are not much different from rifles designed in 1964 or so, except for some more modern materials and finishes. And that’s because they all fire the same ammunition. Limited success of the so-called bullpup configuration rifles also does not add much to overall combat capabilities of the rifle-armed soldiers, not to mention the fact that bullpup automatic rifles were designed and tested during the development and evolution of 1st and 2nd generations of individual automatic rifles.

Another modern trend is an attempt to bridge the gap between full-power, standard calibre and reduced-power (reduced calibre ammunition with introduction of some “more powerful than intermediate” rounds such as 6.5 Grendel or 6.8 Remington SPC). Indian scientists keeping pace with the latest trends; the ARDE, Pune has developed an indigenous 6.6 x 43 mm calibre round compatible to the best in the world. These rounds are surprisingly close in basic ballistic properties to century-plus old warhorses such as 6.5 x 50 SR Arisaka, except that modern rounds have shorter and lighter cases (due to improvements in propellant chemistry) and bullets with better shape.

Therefore, in terms of overall performance any modern 6.5 mm – 6.8 mm “assault rifle” is not that far from 1916-vintage FedorovAvtomat, which fired 6.5 mm Arisaka ammunition. The most notable differences between modern and century-old guns would be materials, manufacturing techniques and overall reliability, especially in harsh and adverse environment conditions.

The key factor that allows moderns soldiers to be noticeably more effective in terms of hit probability is, in fact, not the rifle or ammunition but sighting equipment. Modern telescopic day and night sights greatly enhance shooter performance at medium and long distances, and red-dot sights bring short-range performance under dynamic conditions to a whole new level, compared to old-style iron sights. 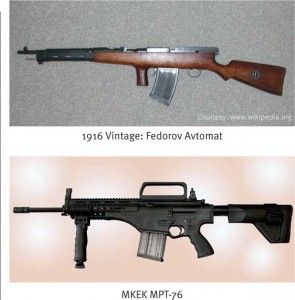 However, in most cases, those sights are not unique to any given weapon, and in theory, anyone with access to a near-century-old weapon such as BAR 1918 or Fedorov 1916 could outfit it with modern sights with some minor adjustments. One interesting recent trend is a slow but noticeable return of the full-power automatic rifles firing 7.62 x 51 NATO ammunition. For some time, these rifles were issued mostly in semi-automatic, designated marksmen versions, with intent to increase reach of small infantry units armed with 5.56 mm weapons in desert or mountainous terrains. However, it appears that one such rifle per platoon is often not sufficient to fight enemies who are using distance, natural cover and modern body armour for protection against small arms fire.

Therefore, several companies worldwide now offer 7.62 mm automatic rifles which are intended for individual, rather than platoon support use. In May 2014, the Turkish army, the largest NATO military force in Europe, announced its adoption of the MKEK MPT-76 rifle, which appears to be a general issue, select-fire weapon based on the German HK 417.

48 thoughts on “Multi-Calibre Assault Rifle: Made in India vs Make in India”