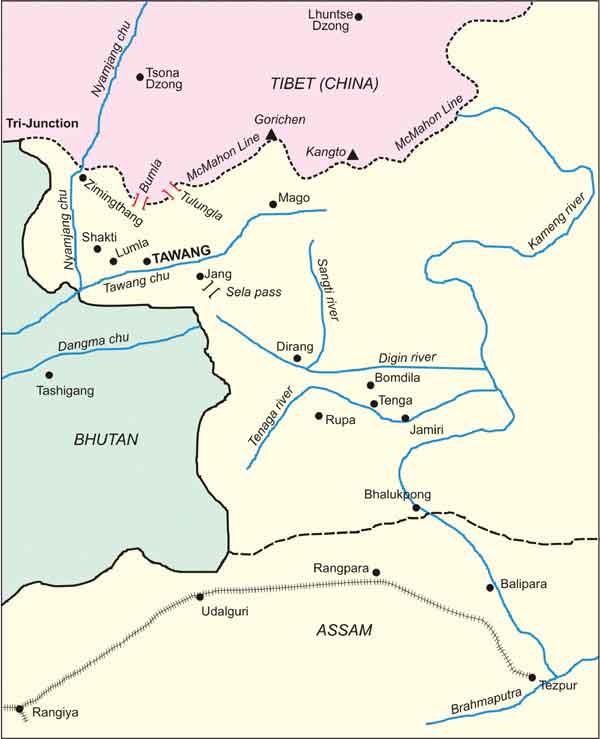 The Theatres of War

China is compelled to maintain her credibility as a responsible power…

The PLA does not have the capability of posing a viable threat in all these locations simultaneously. It cannot ascribe a war aim as “teach a lesson”– because it is more likely that China may be taught a lesson or two in the bargain. The rise of China has been seen as a threat by most of her neighbours. However, expectedly, China has often refuted this and has stated that its rise is peaceful and not a threat to any country.

China is compelled to maintain her credibility as a responsible power, and take cognisance of the pressure of international diplomatic repercussions that will inevitably be generated in the event of a war. As a result, China is likely to activate the IB/LAC in the Ladakh sector, where she is defending her surreptitious gains and Arunachal Pradesh sector, where she stakes a large unsubstantiated territorial claim. This leaves China with limited options of suitable military objectives to achieve her possible political aims.

In Ladakh, the PLA could launch a pre-emptive to deny launch pads for any offensive by India, thereby curtail the latter’s options. Whereas in Arunachal, China will try to capture maximum territory since her claims are central to the conflict. Capturing Tawang will be the decisive geographical area that will allow her to achieve her political aim to change the status quo substantively.

On the other hand, the Tibet Autonomous Region (TAR) has its ‘Centres of Gravity’ very deep in TAR. Opening up areas of conflict beyond these sectors and crossing the IB at any place would be counter-intuitive to India’s non-violent pacifist image and her world-view from the political and diplomatic high moral ground. Re-constituting Tibet as a buffer between India and China is beyond India’s capability. Consequently, this new Corps as a strategic reserve will automatically be drawn into “fire-fighting” missions of limited nature, more so in the reactive scenario.

However, collateral fallout, obviously not unintentional, of the availability of the “Mountain Strike Corps” is its ability to countervail against any collusive support by China in the event of an India-Pakistan conflict. In addition, elements of this force can be detached to bolster the offensive capability of the Army across the Line of Control (LC) into Pakistan Occupied Kashmir anywhere between Chenab and Shyok Rivers. There are opinions that suggest use of such a force being employed for Out of Area Contingencies. It is unlikely that the Indian Government will resort to employing this force as such.

It is a non-sequitur considering India’s strongly held political belief of non-interference in the internal affairs of any country and adherence to non-alignment as being the cornerstone of the country’s foreign policy. Considering these realities, it is a moot point to consider raising additional forces to be pre-positioned, as reserves. This will make available uncommitted units with Brigades deployed in defences; similarly an uncommitted Brigade at Division level and independent Brigade group at the Corps level. Additional forces being side-stepped can be held as strategic reserves under the newly raised Corps. Commensurate combat support and logistic support would need to be provided by new raisings/induction.

Chinese government reaction to the new ‘Strike Corps’ has been measured and somewhat detached, with their officials reiterating that they were “willing to join hands” with India to maintain peace and stability in the border areas. However, the PLA would be deliberating on the operational level implications of this development and in due course will, in all probability, modify PLA’s modernisation to evolve a doctrinal and organisational counter. As may be deduced from Hu Jinato’s report to the National Congress in March 2013, where he emphasised that – “We should strengthen the development of new and high-technology weapons and equipment, speed-up the complete development of modern logistics, train new type of high calibre military personnel in large numbers, intensively carry out military training under computerised, conditions and enhance integrated combat capability based on extensive IT application.”

Consequently, any relocating, regrouping or reorientation of its Rapid Reaction Forces and Group Armies in its Military Area Commands will need to be closely watched to appreciate the likely pattern of operations that PLA will undertake. PLA’s operations will be suitably disguised behind the cover of strategic deception and political subterfuge. On the other hand, deception in the Indian context is viewed as superfluous and treated in a perfunctory and often cursory manner both by the Armed Forces and the Government. Borne by conventional training, the Army relies on set-piece operations coupled with heavy attrition.

Asymmetric warfare, skirmish order attacks, small team operations and hybrid wars by the 4th Generation Warfare warriors are issues yet limited to officer-level discussions. Incorporating it into the Army’s plans and preparing forces to implement these as future war-fighting methodology are still a long way off. As it is because of the quantum difference in the educational standards of the officer and the soldier there is a yawning gap in the quality of planning and its subsequent execution. Planning is officer-centric while, per force, execution is decentralised to the command level of the Junior Commissioned Officers (JCO) and the Non Commissioned Officers (NCO), where there is a command weakness in independently conducting operations without detailed orders and supervision. It is certain that a similar situation, probably more acute, exists in the PLA. In the Army, per se, authority and responsibility needs to be institutionalised at the level of JCOs and NCOs particularly in the Infantry.

The pivotal role of the Defence Research and Development Organisation (DRDO) and the Defence Public Sector Undertakings (DPSU) cannot be over-emphasised. These organisations have to be geared for progressive Research and Development (R&D) and creating assembly lines for new systems for production to meet the requirement of the Armed Forces. The DRDO needs to continue research for product development and innovative technology. Presently, it is funded only on receipt of specific orders from the Armed Forces, which, ipso facto, places the onus of R&D of weapons, systems and equipment on the user rather than the scientists – an amusingly quaint situation.

Further, setting up of an assembly-line can begin only after the final prototype has been successful. Manufacture of hi-tech weapon systems and equipment require equally hi-tech machines for their manufacture. Designing and manufacturing these machines itself involve immense effort in R&D and expenses. Thus, setting up the assembly line would take anything between three to four years. Unfortunately, their orientation is more towards wasteful brick and mortar asset additions. The reality is that the DRDO-DPSU combine is not in a position to deliver.

A well developed infrastructure is the sine qua non for the effective launch of such an equipment heavy force. The slow pace of progress in the construction of projects is due to multiple set of obstacles encountered. These range from self-inflicted overstretch by the Border Roads Organisation to unsavoury squabbling by the civilian hierarchy of this General Reserve Engineer Force seeking to control turf. In the process, induction of modern road construction equipment has been stalled or inordinately delayed. The prolonged delays in obtaining environment and forest clearance have added to the woes. India’s unaccountable bureaucratic monolith continues to hinder in newer ways as if the onus of India’s security rests solely with the Armed Forces.

A future war of any scale cannot be fought by individual Services seeking independent objectives for a common political aim. Strategically, it appears ludicrous. The ‘Cold Start Doctrine’ was one such unilateral hypothesis. Any Service claiming to win a major war sans the other two Services is operating in some bygone era. There were protests by analysts of wasted expenditure in raising an Infantry dominated ‘Strike Corps’ for the mountains. Their arguments favoured a substantial development of the Navy as its strategic dividends of a ‘force in being’ were more credible.

Hi-tech precision munitions and domination of air space and sea lanes can only coerce an enemy to submission when exploited by ‘boots on ground’. The need is to synergise the potential of the three Services and the Para Military Forces guarding the IB/LAC as also those earmarked for the rear areas so that the combat power generated is a multiplication of the individual potential and not just their sum.

China’s diplomatic pronouncements on policies of ‘peaceful development’, ‘harmonious world’ and its stance of ‘non-interference and non-intervention’ in the internal affairs of other nations have been negated by the developments in East and South China Seas. There is a school of thought amongst the strategic analysts that the by creating this new strategic reserve India’s military strategy against China is graduating from the current ‘dissuasion’ to ‘deterrence’. In the accepted context, dissuasion is related to a superior force taking a string of measures to ensure that a potential adversary does not develop as a future challenge or begins an arms race. It does not fit the India-China dyad. Militarily, a strong deployment in those sensitive border areas may preclude localised action by the adversary. However, it may not overall result in dissuasion at the strategic level. As regards deterrence, it would be more relevant to see it at the political level. Since the decision to go to war is a political one, deterrence is affected between governments more than military to military. Here, then all elements of national power need to be synergised to defeat the enemy.

For India to emerge as a regional power and a global player, there is need for an attitudinal change. India has the wherewithal to protect its interests and assert its rights and claims. With political will, the country will forge ahead without encumbrances. The stakes are high and time is running out. India cannot remain static marking time expending energy wastefully while others zoom ahead consolidating and enhancing comprehensive national power. The location of uncommitted reserves up to Corps level and the Strategic Reserve/Mountain Strike Corps opens avenues that need courageous leadership and the will to be exploited to protect and enhance the country’s interests.