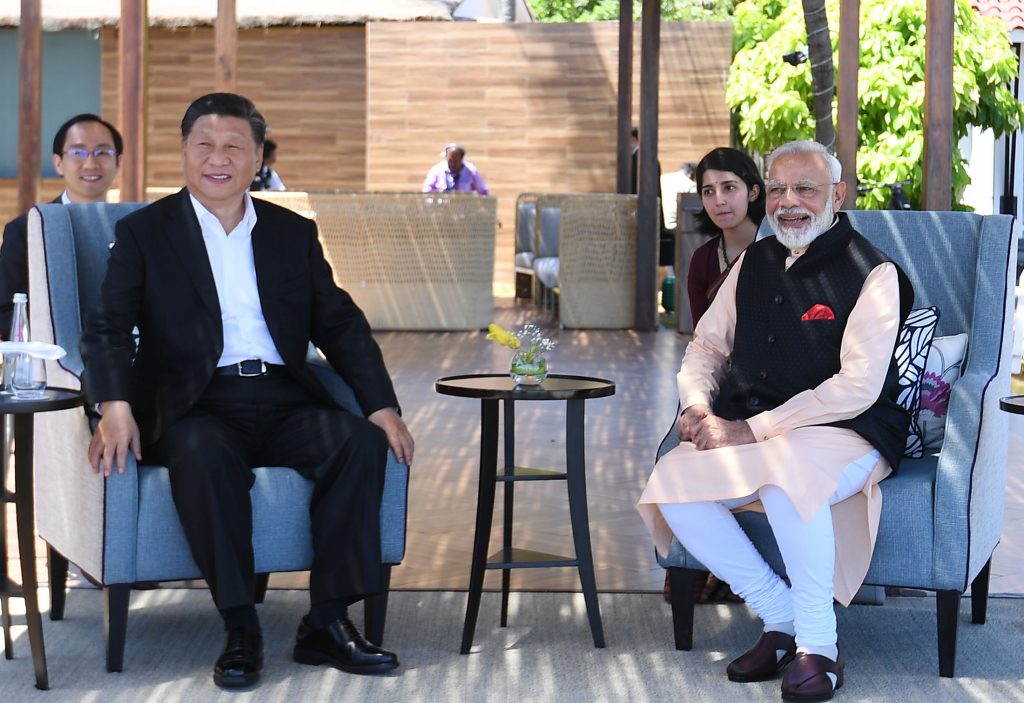 Prime Minister Narendra Modi at the tete-a-tete with the President of the People’s Republic of China,  Xi Jinping, in Mamallapuram, Tamil Nadu on October 12, 2019.

Following up on the first informal summit between Prime Minister Narendra Modi and President Xi Jinping at Wuhan in China during April 2018, the second informal summit between the two leaders was held at Mamallapuram on October 11-12. Ironically the summit came amidst fresh tensions in the India-China bilateral relationship. China has been opposed to India’s entry into NSG, membership of UNSC and siding with Pakistan to protect terrorist leaders at the UN as best it could. To all this, is added the issue of Kashmir with China firmly behind Pakistan. China approached UNSC for a closed door meeting on Kashmir after India revoked Article 370 in J&K to facilitate development and grant Kashmiris same rights and privileges as all Indian citizens. China’s statement read, “China is seriously concerned about the current situation in Kashmir.” China also said, “If Muslims collectively oppose India’s move, it is hard for India’s system to control the situation”. Chinese foreign minister Wang Yi raised the issue of Kashmir at UNGA and China’s Vice Foreign Minister protested over India’s exercise ‘Him Vijay’ in Arunachal Pradesh, even though the exercise was not in proximity of the LAC, which precluded even the need to inform China.

While Indian media harped on China showing the door to Pakistan on Kashmir, just before coming to India, Xi met Pakistan’s Prime Minister Imran Khan accompanied by Army Chief General Qamar Javed Bajwa, and told them that he was watching the situation in Kashmir and would support Pakistan in issues related to its core interests. It is well known that Pakistan maintains Kashmir as its core interest.  In response to China’s provocation, our MEA responded by saying, “India’s position has been consistent and clear that Jammu and Kashmir is an integral part of India. China is well aware of our position.” India never made any statement over China’s treatment of Uighurs in Xinjiang or the situation in Hong Kong despite youth leader Andy Chan publicly calling for India’s support. India did not even protest China’s muscling tactics in waters of Vietnam, where Block 128 is leased to India’s ONGC for drilling oil.

Mamallapuram was chosen as the venue for the Modi-Xi summit because it was a flourishing post in ancient times that facilitated sea trade between India and China. Modi accompanies Xi on a tour of three famous UNESCO heritage sites, describing them and discussing other issues along the way.  Format followed for the summit was the same as for first informal summit at Wuhan in 2018; no signing of agreements and no joint statement, with both sides free to issue separate statements. Post Wuhan summit, India had issued quite an elaborate statement, whereas China largely only ‘quoted’ what the Indian media said. Also, Indian media mentioned a joint India-China project in Afghanistan, China made no mention, and it only boiled down to training Afghan diplomats.

The high-level Chinese delegation accompanying Xi Jinping included Ding Xuexiang, member political bureau of Central Committee; Yang Jiechi, member political bureau of Central Committee, and Foreign Minister Wang Yi.  Discussions between Modi and Xi on October 11 continued till late in the evening over an extended dinner. The focus mainly was exchange of views on individual national vision and governance. Modi told Xi of his renewed mandate for economic development and Xi said China would help India in this. According to Foreign Secretary Vijay Gokhale, there was also “short” conversation on radicalization and terrorism, which was dubbed as a “common” challenge. But this has become routine in bilateral and multilateral forums world over. Recall, this was even recorded in the statement issued on conclusion of the last BRICS Summit presided over by China. The irony, however, is that beyond such semantics the stance of individual nations remains unchanged.  China continues to covertly support Pakistan’s terror attacks in India and Afghanistan; and instead shields Pakistan as also a victim of terrorism.

On October 12, Modi and Xi had a 50-miniute one-to-one dialogue followed by delegation-level talks where Modi welcomed Xi and said, “We have decided to manage our differences prudently, and will not let them become disputes.” Modi said that a new era will begin in Sino-Indian relations with the “Chennai connect”, adding that bilateral strategic communications increased following the Wuhan summit.  Xi’s response was that he had engaged in candid discussion with Modi on bilateral relations, heard his concerns and would respond to them in due time. Foreign Secretary Vijay Gokhale later briefed media that China is ready to address India’s serious concerns on trade deficit and has also proposed high-level trade discussion between India’s Finance Minister and Chinese Vice President. He also said that China has accepted there are concerns in the RCEP, and that modalities to balance these trade concerns will be worked out later.

Modi would naturally want some progress on the trade imbalance before the next Modi-Xi informal summit in 2020 but what can be achieved so soon is  questionable. India’s annual exports to China are about $15 billion while imports are some $85 billion, leaving India with a  deficit of over $60 billion. China allows zero duty access on 311 items for export from Pakistan but none to India despite the massive trade deficit.  China’s stance that concerns over RCEP will be worked out later is ominous since it obviously wants India to first sign on the dotted line and join RCEP. But once India joins RCEP, it would have to reduce duties on more than 75% goods imported from China. This implies dumping of more Chinese goods in Indian markets, hitting Indian industries including small-scale and start ups. As it is true indicators of India’s economic situation are not encouraging. India’s overall export growth in the first eight months of 2019 fell to just 1.4% ($219 billion), which is significantly lower than the 11.8% growth in the same period in the last fiscal. The reason no doubt is weakening of global trade. However, further lowering of tariffs under RCEP would hurt our exports in future, and in turn our economy.

At the second informal summit, India and China also consented for both sides to invest in IT in each other’s country. This special mention may prove to be China’s masterstroke in this summit – a coup of sorts. China’s Huawei is participating in India’s hunt for developing 5G network after China threatened if this was not permitted, Beijing may deny market access to important Indian products. Already some Indian companies, apparently bought over by China, are rooting for Huawei  to be given India’s 5G network. Some scholars who were dead against giving the network to Huawei on grounds of national security, now say if China wants it and Indian companies want it, what can we say? Maybe they have sensed some official sources and prefer to toe the line. But it is a question whether one wants to go for a cheaper network offered by Huawei or spend a little more on another source with better security guarantee and no hidden anti-India agenda. Grabbing India’s 5G network will be major strategic victory for China. Whether India develops its own 5G network indigenously, does it in conjunction another foreign partner or submits to China, remains to be seen.

India and China also agreed to enhance people-to-people contact.  70 events are planned to celebrate 70 years of India-China diplomatic relations. But the fact remains that China’s stance towards India has hardened despite the Wuhan summit, as can be seen from its multiple actions. China is now openly siding with Pakistan on Kashmir even as both countries eye large chunks of Indian Territory. The CPEC is China’s strategic highway to the India Ocean and Pakistan is China’s springboard for progressing operations. Pakistan’s poor economic situation helps China draw it more into its gravitational pull. It would not be surprising that with China heading FATF, Pakistan escapes being put on the blacklist.

China views India as a hurdle for regional supremacy and a China-centric Asia. Therefore, its endevour is to limit India’s strategic space within South Asia. This is the reason China is in no hurry to settle the border with India. China’s cumulative GDP is around $14 trillion in comparison to India’s $2.8 trillion. China’s annual defence spending of $250 billion dwarfs India’s at $54 billion. China’s military modernization and border infrastructure are superior to that of India.  China will prefer to wait a border settlement as long as it has upper hand at the bargaining table, which can give it extra territory. To-date China has never admitted intruding into Indian Territory; always claiming it is Chinese territory. Inviting the India defence minister to visit China is mere formability.

It appears that India hesitated in voicing numerous concerns that needed to be conveyed to Xi at the Mamallapuram summit; India only expressed concerns about the trade deficit and RCEP plus denouncing terrorism in general. This may be construed by China as weakness. The tangible gains for India from the second Modi-Xi informal summit may be as little as from the first one at Wuhan, even as we indulge in the semantics that that strategic communications have been further enhanced. It was laughable seeing some of our TV channels saying Pakistan must be very worried with China standing by India’s side, one even stating that Pakistan must be “shivering”.

Prior to Xi coming to Mamallapuram, China’s first premier Chou en Lai had visited it in 1959. Four years later, he stabbed India in the back in 1962. Xi may not attack India similarly but his regional and global ambitions could make him twist the knife slowly, especially if he views India-US strategic partnership inimical to Chinese interests. Taking China for granted would be naïve.