Modi talks to China looking Straight into Her Eyes 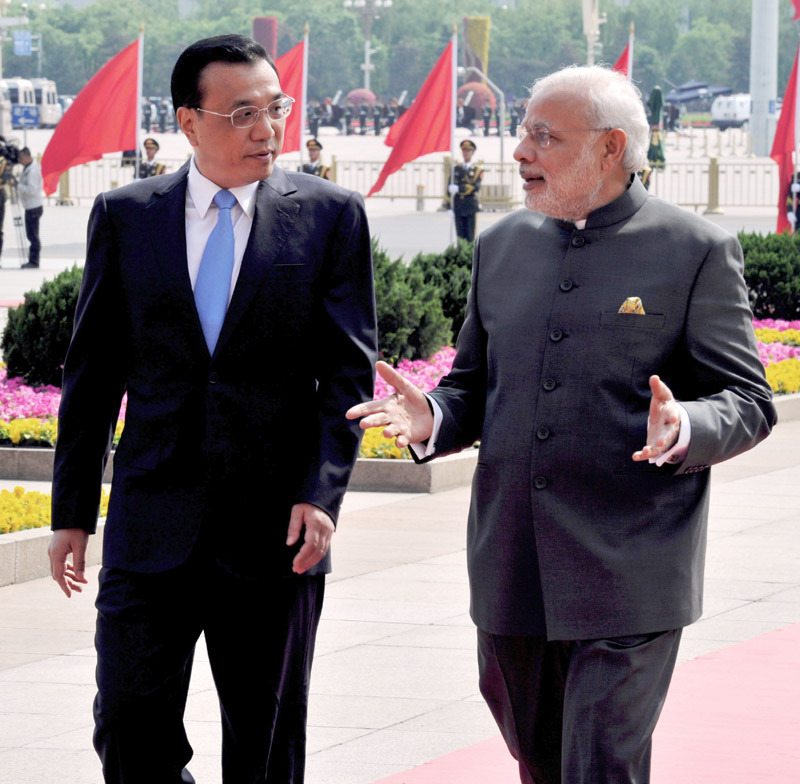 The Prime Minister, Narendra Modi with the Chinese Premier, Mr. Li Keqiang, at the Official Welcome Ceremony, at Great Hall of People, in Beijing, China.

Days before the Indian Prime Minister Narendra Modi was to leave for China on a three-day state visit, India formally registered a protest against the recently signed $46 billion China-Pakistan Economic Corridor (CPEC).

The Chinese envoy in Delhi was summoned to the Ministry of External Affairs and an objection was lodged over the project.

India has also expressed its concerns about China routing its corridor through Kashmir, but President Xi Jingping had dismissed these objections, describing the economic corridor as “a commercial project.”

Going by the past record this was a little unusual. It appeared India was more confident and well prepared to negotiate all aspects; bilateral, regional and multilateral issues from a relative position of strength.

Mr Modi has been the only Prime Minister of India to visit Arunanchal so many times in over a year and the February 2015 visit being the latest in the series. Narendra Modi government has also extended overt cordial gestures to Tibetan Government in exile unlike any other Prime Minister in the past irking the Chinese. This prompted adverse comments in Chinese media virtually highlighting the nervousness, somewhere, arising out of an assertive and a strong Indian Prime Minister.

At the eve of this visit an adverse opinion on state controlled media that appeared said, “…Modi should no longer visit the disputed border region in pursuit of his own political interests, nor should he deliver any remarks that infringe on the consensus on bilateral ties. Meanwhile, the Indian government should completely stop supporting the Dalai Lama, and stop making the Tibetan issue a stumbling block to the Sino-Indian relationship”.

Though the outcome of this visit may not have been spectacular in terms of tangibles. This visit, high on optics has managed to create a good sense on both sides of the Himalayas.

India and China have signed 24 agreements worth over 10 billion dollars in Beijing on May 15, 2015 after Prime Minister Narendra Modi held talks with Chinese premier Li Keqiang. Business appeared to be the main focus of PM Modi’s three-day visit to China.

However more importantly, Mr Modi’s statement in Beijing reflects the importance and leverage India may hold in geo-political space viz-a-viz China. The Prime Minister said, “We have common global and regional interests. For example, we have a shared interest in the outcome of the international climate change negotiations. We are both trying to strengthen regional connectivity. Terrorism is a shared threat. Instability in West Asia matters to both of us. Peace and progress in Afghanistan benefits us both. I am confident that our international partnership will deepen”.

China is looking at the vast mineral wealth and hydrocarbons reserves available in Central Asian Republics (CAR), Africa and the Middle East. China wants to develop the economy of its region in the hinterland. Astonishingly the GDP of China’s provinces in its West and South may be comparable to countries of Africa’s Saharan region while the GDP of the states on the East coast may be comparable to that of any American states. The recently announced CPEC is an effort towards this direction aiming to balance the wide economic disparity.

What has made the Indian Prime Minister more confident and powerful, thus compelling China to have a relook over strategic and a long term view of India – China relationship?

As reported in the Indian Daily, The Hindustan Times of April 24, 2015 “India is poised to counter the recently announced $46-billion expansion of China’s strategic footprint in Pakistan with a foothold on the Iranian coast. New Delhi is set to ink a memorandum of understanding (MoU) on the development and operation of Chabahar port in Iran, taking into account the international obligations that arise out of Tehran’s nuclear programme.

Merely 72 km west of China-developed Gwadar port in Pakistan’s restive province of Baluchistan, Chabahar, on the mouth of the Straits of Hormuz in the Persian Gulf, provides India a land-sea access route into Afghanistan and Central Asia through the Bandar Abbas-Caspian Sea axis”.

By exercising the Chabahar option India may well challenge the hegemony of Chinese in the region by offering an alternative to those land locked countries. India already has better relations with these CAR as compared to the Chinese. This land route to CAR passing through Iran may well prove to be safer while the CPEC would be constantly under threat from Baloch separatists and terrorist organisations like the TTP.

India over past on year has strengthened its position on bilateral stage with countries of SAARC, ASEAN, Australia, Mongolia, South Korea and Japan. It has placed itself in the leadership role in the region stretching from the Gulf of Aden to South China Sea.

Evacuation of 4000 standard civilians in Yemen under operation Rahat and recently the massive Earth Quake relief in Nepal by India has underscored the strategic reach and ability as first responders.

Growing Naval prowess of India and its ability to conduct complex manoeuvres and exercises at Sea extending up to South China Sea and the Pacific highlights the capacity of the country to protect its interests far flung.

On the eve of Modi’s visit to China, in a meeting of the Defence Acquisition Council (DAC) chaired by Defence Minister Manohar Parrikar, government approved proposals to build a second indigenous aircraft carrier in 65000 ton displacement category. And also arming six of Navy’s warships with BrahMos missiles. The DAC also gave nod to arming India’s three Delhi-class destroyers, and three Talwar class frigates with BrahMos supersonic missiles at a cost of Rs. 27 billion. It also approved buying 145 M777 light guns for mountain artillery regiments from US under foreign sales for Rs. 29 billion. This has given a clear signal of future geo-strategic ambitions of India in this region.

India’s vast economic potential and her growing strategic cooperation between the United States, Japan and Australia has forced the Chinese to consider India as a second pole of the Multipolar Asian order. The aggressive foreign policy pursued by the Modi government in the past one year has strengthened the status of the Prime Minister and this been well proved at Beijing.