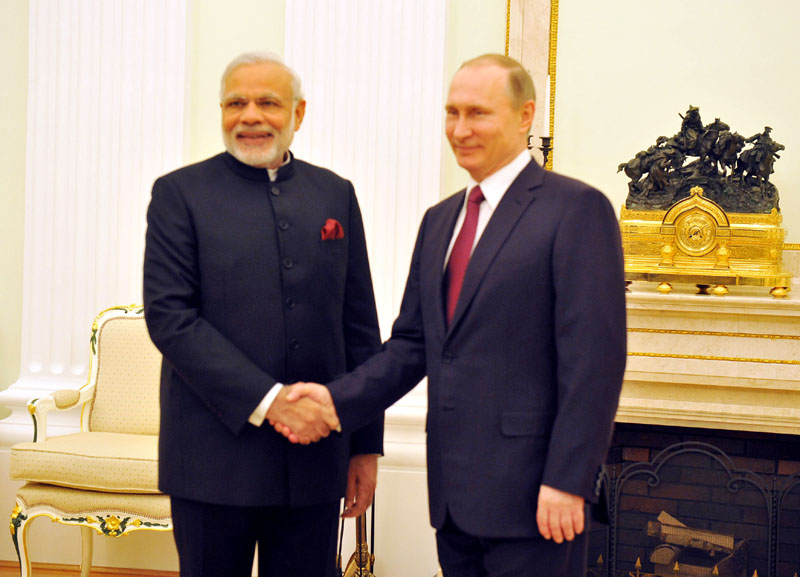 Prime Minister Narendra Modi is scheduled to attend the Eastern Economic Forum in Vladivostok and hold the annual bilateral summit with Russian President Vladimir Putin on September 4-5.  Modi will be the main guest at this year’s Eastern Economic Forum where Putin would be exhorting world leaders and industry captains to promote investments in Russia’s Far East region. Foreign analysts see Russia in danger of being overrun by China’s BRI creating a massive economic zone linking China to Europe by land and sea; Chinese President Xi Jinping plans to be in driver’s seat of the emerging Eurasian order.

During the bilateral summit, Modi and Putin will hold mutual discussion on a host of issues including defence, trade, nuclear energy and hydrocarbons, according to Nikolay Kudashev, Russian Ambassador to India. Another Russian embassy official says both sides are working to finalize an agreement to set up six more civil nuclear reactors in India, in addition to the Kudankulam project.

Earlier, EAM S Jaishankar had travelled to Russia to set the stage for Modi’s visit. Jaishankar met his Russian counterpart Foreign Minister Sergey Lavrov and other Russian officials, Including Deputy Prime Minister Yuri Borisov who also co-chairs the Intergovernmental Commission on Trade, Economic, Scientific, Technical and Cultural Cooperation. There was discussion for multifaceted cooperation in space exploration, nuclear energy and other high-tech areas. Both countries remain united for building interstate dialogue on principles of the UN Charter and to cooperate closely within the UN, and G20 through BRICS, SCO and RIC. Lavrov also mentioned the need to intensify work on the Russia-India-Iran format for establishing the International North-South Transportation Corridor (INSTC).

Russia is likely to discuss a number of defence deals during the bilateral summit. In 2015, India and Russia concluded an Inter-Governmental Agreement (IGA) for at least 200 Kamov Ka-226T helicopters costing over $1 billion; meant to replace the ageing Cheetah and Chetak helicopters. The Ka-226T has a service ceiling of 6500m enabling operations in high altitude and glacial areas. Modi will be shown two helicopters in Vladivostok; one, prototype of Kamov KA-226T built specifically for Indian requirements, and; two, Mi-171A2 passenger helicopter built for Indian private company Global Vectra Helicorp Limited awaiting certification from Indian government. With import of about 60 x KA-226T, balance are to be produced in India as joint venture between HAL and Russian Helicopters (RH). RH has already signed MoU with five Indian companies covering assemblies like fuselage, blades, radio station and landing gear.

Russia is also likely to offer conventional submarines through the government-to-government route during Modi’s visit for Indian Navy’s Project-751. The Navy is looking to procure six advanced conventional diesel-electric submarines under the Strategic Partnership (SP) model.  In June 2019, the Navy had issued Expression of Interest (EoI) for identifying potential Indian strategic partners for the project costing some Rs 45,000 cr. The foreign manufactures are to be selected separately. Contenders for Project-751 are Rosoboronexport Rubin Design Bureau of Russia, Naval Group of France, SAAB Group of Sweden and ThyssenKrupp Marine Systems of Germany.

From the Russian side, the offer to jointly develop the Fifth Generation Fighter Aircraft (FGFA) has continued to remain open. However, after protracted negotiations, India decided not to go ahead with the project. Possibly, the threat of sanctions under America’s CASSTA may have contributed towards this decision, even though India is going ahead with the S-400 Indo-Russian deal. Russia’s Su-57 FGFA has completed its development and the first batch is being produced for delivery to the Russian Air Force.

MiG Corporation of Russia plans to offer its newest MiG-35 for the IAF under the ‘Make in India’ initiative with transfer of technology (ToT). MiG is participating in tender process for supply of aircraft to the IAF through Rosoboronexport. The new MiG-35 on offer is lightweight, has better combat effectiveness, range, efficiency, latest avionics, upgraded software, new cockpit with multifunctional display, and advanced AESA radar with increased range providing detection, tracking, recognition and acquisition of air, ground and surface targets in front and back semi-spheres, day and night at distances of 190 km. This may find mention at the Modi-Putin summit though MiG is still in the process of finalizing agreement with the Indian industrial partner.

Russia is also reportedly putting the $4.5 billion T-14 Amata tank (Russia’s newest MBT) deal on the table during the Modi-Putin Summit. The Indian Army had issued a global RFI in November 2017 for procuring 1,770 Future Ready Combat Vehicles (FRCV) built in India with foreign collaboration under the ‘Make’ category through the Strategic Partnership model. But Russia is pitching for a government-to-government Amata deal as multi-purpose replacement for both T-72 tanks and ICVs, both chassis being common. A recent Indian delegation to Russia reportedly evaluated the Amata. The first 100 x T-14 Armata tanks are scheduled for delivery to Russian Army in 2020. The next generation features on these tanks include an ‘unmanned’ turret, better armour, mobility, weaponry and fire control system. Unmanned turret makes it part robotic albeit Russia is also developing fully robotized T-72B3 tanks for employing them as robotic vanguard squad to lead mechanized formations under its ‘Storm’ concept.

A significant feature of the Modi-Putin summit will be a comprehensive energy cooperation agreement aimed at reducing India’s dependence on traditional fuel suppliers. The framework to be signed would provide alternative route for oil, gas and coal from the Russian Far East. A joint declaration on integral energy cooperation will be issued, and a 5-year roadmap will be signed. India is preparing to begin regular imports of Russian crude and coking coal, both from the far eastern region of Russia, where Indian state-run oil companies have invested billions of dollars in oil and gas projects. Crude supply agreement with Russia will send a strong signal to the OPEC oil export cartel and its members from West Asia, which presently are the main oil suppliers to India.

Indio-Russian strategic partnership has remained strong throughout history. Russian support during 1971 enabled India help Bangladesh gain independence in face of US-UK opposition. Russia has strongly backed India’s revocation of Article 370 in J&K, maintaining that Pakistan should resolve the issue peacefully with India in accordance with the 1972 Shimla Agreement. Taking the Indo-Russian Strategic Partnership to the next level has a very wide scope, be it cooperation in space, nuclear energy, defence, trade, hydrocarbons and many more fields, even though America’s weaponization of trade and sanctions has brought Russia and China very close, plus Russia has diversified its defence relationships, upgrading it with Pakistan in the process.

There have been some unacknowledged hiccups in the India-Russia defence relationship as well. For example, Russia has been pushing for the FGFA deal, which was not accepted by India possibly because of US pressure – fear of sanctions under CAASTA. Conversely, Russia has been hesitating to share hypersonic technology with India with regard to the BrahMos supersonic missile; there could be technical difficulties, desire to not share it at all, or until Russia’s new supersonic missile ‘Zircon’ becomes operational. Some analysts say that the era of major defence deals with Russia are over for India, which may not be so. Joint ventures for development of weapon platforms and defence equipment, is quite different from importing whole systems like the S-400.

In the complex geopolitical environment balancing multiple strategic partners calls for fine art. Price may remain important factor in defence deals bur extracting maximum strategic value for India in such deals must remain in focus. Also, balancing relationships need not be in context of defence deals alone; it is a question of economics at holistic level. The agreement for Russian crude will balance out India’s energy ties with the US and help meet our growing energy needs after India stopped buying Iranian oil due to US sanctions. All in all, the India-Russia strategic partnership has vast scope for expansion. It will surely be further cemented during the upcoming Modi-Putin bilateral summit.