Since October 12, a group army of the Beijing Military Area Command (MAC) of the Chinese People’s Liberation Army participating in the “Mission Action 2010” trans-MAC mobile exercise adopted such transport means as aviation, railway and highway to rapidly transport its troops to the exercise assembly area.

Its the first time for an airport in north China to participate in the support for “Mission Action 2010″ trans-MAC mobile exercise and perform the military transportation support task.

At 07:00 of October 12, with the order of Wan Feng, deputy director of the Military Transportation Department of the Beijing MAC, the officers and men of the group army immediately kicked off their loading operation at a railway station in north China. Wan Feng told the reporters that all loading operations had a tight timeline. It took 5 hours to load an echelon of troops and equipment onto a train in the past, but it took only 3 hours under the conditions of mixed-equipment, real-equipment and live-shell this time.

It was the integrated military-civilian support including the requisition of civil passenger airliner and employment of dedicated railway line of local enterprises that accelerated this three-dimensional transportation. It’s the first time for an airport in north China to participate in the support for “Mission Action 2010” trans-MAC mobile exercise and perform the military transportation support task. In view of that the special circumstances of all the participating officers and men were equipped with real equipment and live shell, a green passage was set up for the troops to rapidly board the aircraft, so as to ensure a safe and high-efficient remote projection of the troops.

By Xia Hongping and Zou Weirong 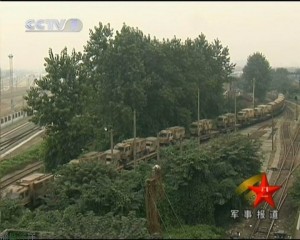