Military Coup an Impossibility and Unthinkable in India 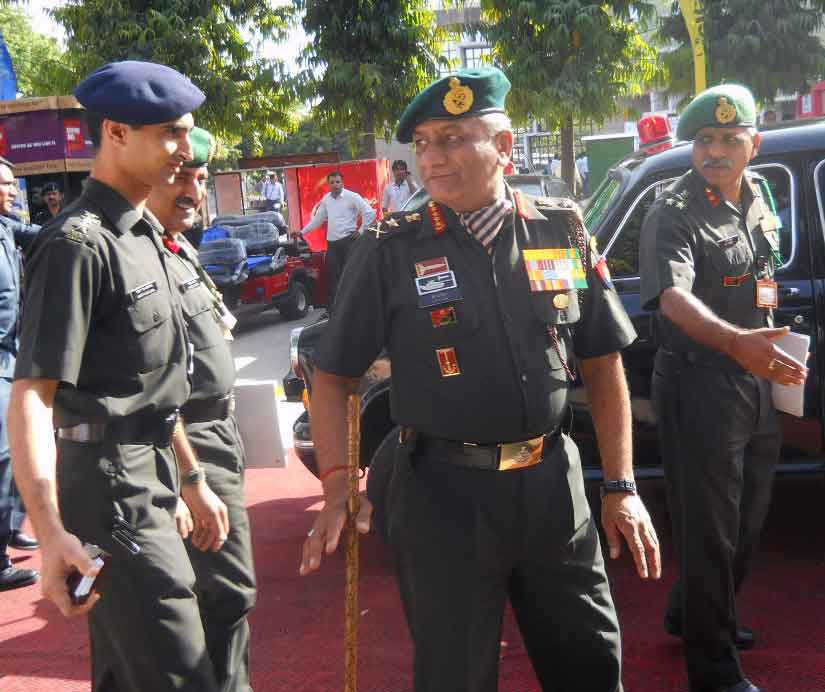 A front page news story published by one of the major national dailies two years ago in April 2012 regarding movement of two army units towards Delhi, the national capital, caused a nation wide controversy. The movement of a mechanised infantry battalion from Hisar and a parachute battalion from Agra on 16 January 2012 (the day the than Army Chief General VK Singh had filed an appeal petition in the Supreme Court against the Central Govt pertaining to the change in his date of birth) towards the national capital was alleged in the news story to be suspicious and to have caused apprehension and panic in the highest levels of the Govt. These allegations were denied by the Govt and the Army stated that the movements were part of routine training exercises undertaken at lower formation levels to rehearse mobilisation drills during adverse weather conditions like fog in winters.

…the Indian Army’s strength of 1.3 million in comparison to the country’s population of 1.2 billion is miniscule, whereas, in countries which have had coups the proportion of their armies strengths have been high…

However, it took quite some time for various speculations that were being fuelled and the controversy to die down. The issue had since rightly so seemed to have faded away from the public memory when again it got raked up on 20 February by the statement of the than Director General Military Operations (DGMO) which was carried by the national dailies and debated on the TV news channels. The than DGMO who had retired a few weeks ago on 31 January 2014 had stated that there were concerns at the highest levels of the Govt and that he was called by the Defence Secretary to explain about the movements of the two Army units and order them to immediately move back. Further, he stated that there was mistrust between the Govt and the Army.

During the debates on the TV news channels on February 20 and 21 views and opinions were being expressed on the possibilities of a military coup and speculations on the motives for the movements. One such motive being ascribed was that it could be by the than Army Chief to intimidate or pressurise the Govt in the case pertaining to the change in his date of birth which would have extended his retirement date and consequently his tenure by another ten months.

The issue in question has fuelled an unnecessary controversy which could have been avoided as it has questioned the integrity, loyalty and patriotism of the Indian Army. The Indian Armed Forces are a professional force and have been apolitical, loyal, patriotic, upholders of the democratic institutions, guardians of the nation’s territorial integrity and have remained in the forefront of the nation building activities.

We as a nation and its citizens need to understand and be rest assured that a military coup in India is an impossibility and unthinkable whatsoever be the circumstances. Besides these attributes, values and the track record of the Indian Armed Forces, the other factors that will not permit a military coup and act as safe guards are firstly, the large size of the country both in terms of population (1.2 billion) and being a sub continent size country in terms of area is in itself one of the biggest safe guards as historically no coups have taken place in large countries (revolutions notwithstanding).

…the intelligence agencies, namely, IB and R&AW unlike the ISI in Pakistan, are independent of the Indian Armed Forces and thus would be in a position to pre empt any coup attempt.

Secondly, India has strong democratic, political and civil governance structures and traditions which have stood the test of time. Thirdly, the intelligence agencies, namely, IB and R&AW unlike the ISI in Pakistan, are independent of the Indian Armed Forces and thus would be in a position to pre empt any coup attempt. Fourthly, the Indian Army is heterogeneous in that it has proportionate representation from all states unlike the Pakistan Army which has an overwhelmingly dominant representation of 70% from Punjab its largest state and this is one of the main reasons which has prompted staging of four military coups in Pakistan within six decades of its existence.

Further, the Indian Army’s strength of 1.3 million in comparison to the country’s population of 1.2 billion is miniscule, whereas, in countries which have had coups the proportion of their armies strengths have been high like the Pakistan Army’s strength of 0.6 million is abnormally large compared to its country’s population of 180 million. Fifthly, the Central Para Military Forces, namely, CRPF, BSF, CISF, ITBP, Assam Rifles and SSB having a total strength of 0.6 million are under the Ministry of Home Affairs and independent of the Army and are thus a viable deterrence. On the other hand the Para Military Forces in Pakistan consisting of Rangers, Frontier Corps, Mujahids and the NLI are defacto part of Pakistan Army since these are officered by regular Pakistan Army officers and thus there is no viable deterrence in Pakistan.

It is therefore of utmost importance for the nation to understand the impossibility of a military coup in India. Keeping this fact in view, the inferences that one can draw from the controversy concerning the movements of the two Army units on 16 January 2012, firstly, is that it was a sheer coincidence that the than Army Chief’s petition also got filed in the Supreme Court on the same day. The other inference which was also a matter of intense speculation, could be that the movements were ordered to intimidate and pressurise the Govt with regard to the than Army Chief’s age row.

However, this inference defies all commonsense and logic as it appears to be an irrational, foolish and a very immature decision, if at all taken, on the part of the individual(s) responsible. The fact that emerges out of this entire issue is the trust deficit between the Govt and the Army on account of the than Army Chief’s age row, the lack of integration of the Armed Forces and the Govt and the long pending/over due higher defence reforms. It was a needless and avoidable controversy and in the national interest it should not be made to resurface.

3 thoughts on “Military Coup an Impossibility and Unthinkable in India”