Military Application of Amphibious Aircraft in the Indian Environment 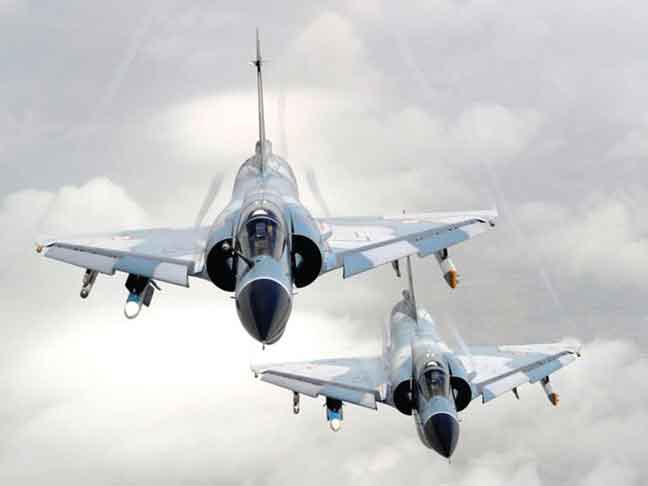 Since India does not have large inland seas or lakes, amphibian aircraft operations will be along coastal areas and in island territories. At distances out to sea of over 150 km or so, the speed differential between fixed-wing aircraft and helicopters become significant when responding to emergencies. At these distances, the time on station of helicopters gets degraded because of fuel considerations. Payload limitations have already been highlighted. Even medium-size twin-engine amphibians have a clear advantage over helicopters at these distances, the disparities increasing further as distances increase. The ability to alight on water as part of routine operations is the clincher as far as amphibians are concerned. At longer ranges, use of helicopters is not possible except perhaps with aerial refueling.

The Andaman & Nicobar Islands are about 1,400 km from the mainland, stretching for nearly 800 km from North to South. The large spread and long distances are tailor-made for aircraft operations. The constraints are shortage of runways plus length restrictions of existing runways because of lack of land space and terrain considerations. These conditions invite the use of seaplanes and amphibians which have suitable sheltered water landing locations in plenty. Amphibians have multi-role capabilities and can therefore be used even in other areas as well as operate from land in case of adverse sea conditions. Movement of personnel and equipment can be done in a timeframe of hours instead of days by ships.

The military importance and the vulnerability of these islands has finally dawned on us only recently despite the fact these were the only Indian territories occupied by the enemy for a length of time during World War II. Patrolling these islands and the waters around them can only be done effectively by locally based aircraft and ships since they are far from the mainland. Non availability of runways makes the existing ones vulnerable to enemy action in war and natural calamities such as earthquakes and tsunamis. Amphibian aircraft reduce these vulnerabilities with the added advantage of the ability to get them on land to escape adverse sea conditions which could damage them if they continue to be moored on the water. A mix of long and medium range amphibians operating from these islands could extend our surveillance ranges and periods considerably.

The Lakshadweep chain is closer to the mainland at 200 to 400 Km and much smaller in spread as well as in land area. Land for runways is very hard to come by and use of amphibians is an attractive option. Patrolling these areas by shore-based aircraft flying out from the mainland or using locally based helicopters is not as effective as using amphibians based locally or using the islands as a staging area. In the area of SAR, there is hardly any cover in these islands other than that can be provided by ships and helicopters engaged in other tasks and happen to be in the vicinity. With their inherent safety features of ability to operate on the water, amphibians are a better alternative.

Military operations such as interdiction of suspect pirate, contraband or terrorist surface craft are increasing as these threats increase, both in the Arabian Sea and Bay of Bengal areas. As highlighted earlier, use of amphibians gives added operational flexibility and could be the only available option in case supporting ships and their ship-based helicopter assets are far away.

As far as offensive operations go, we may have to flush out hostile forces that have infiltrated into these islands during peace as well as in wartime. Insertion of Special Forces can be done rapidly by landing amphibians on water. Extraction is also easier to accomplish using these aircraft rather than bigger ships or slower helicopters. The same holds true for own offensive actions into enemy held islands.

The Air Force used to confine over-the-sea flying to at the most 100 km from land in the past. This changed with the induction of the Jaguars and dramatically with the procurement of the Mirage 2000 and the SU-30MKI with long range and precision guided stand-off munitions.

The Navy used to operate patrol aircraft long distances out to sea but now with the induction of long-range surveillance aircraft such as the P8I and fighters of the Air Force operating in the strike role along with the capabilities of the carrier-based MiG-29, use of offensive air power over the sea has entered a new phase. However, our combat SAR assets are woefully incapable of rescue at long ranges. 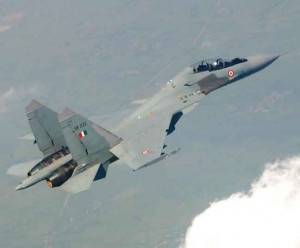 The Japanese Maritime Self Defence Force inducted long range amphibian aircraft in this role when it felt the need to provide SAR cover to its P3C patrol aircraft. Long range over-water operations by fighter and patrol aircraft have inherent operational risks. The only way to rescue aircrew from the sea over long distances is to use amphibians or risk valuable ships having hundreds of crew members, which may have to operate alone in hostile waters, to conduct rescue missions which will take much longer and thereby reduce chances of locating any survivors alive. The multi-role capabilities of amphibians make them useful in other tasks and a better alternative.

The Air Force and the Navy have issued Requests For Proposals for amphibians in the last few years. The Japanese Government and Shin Meiwa have expressed interest in the sale of US-2 four-engine amphibians to India recently. The rider is that because of their self-imposed constraints on export of weapons, both the aircraft are for SAR only.

Comparisons of available parameters of two types of modern amphibians – the Shin Meiwa US 2, a large size, four-engine, long-range aircraft and the Canadair/Bombardier CL-145, a medium-size twin-engine, medium-range aircraft, are given below. Both are in commercial production. 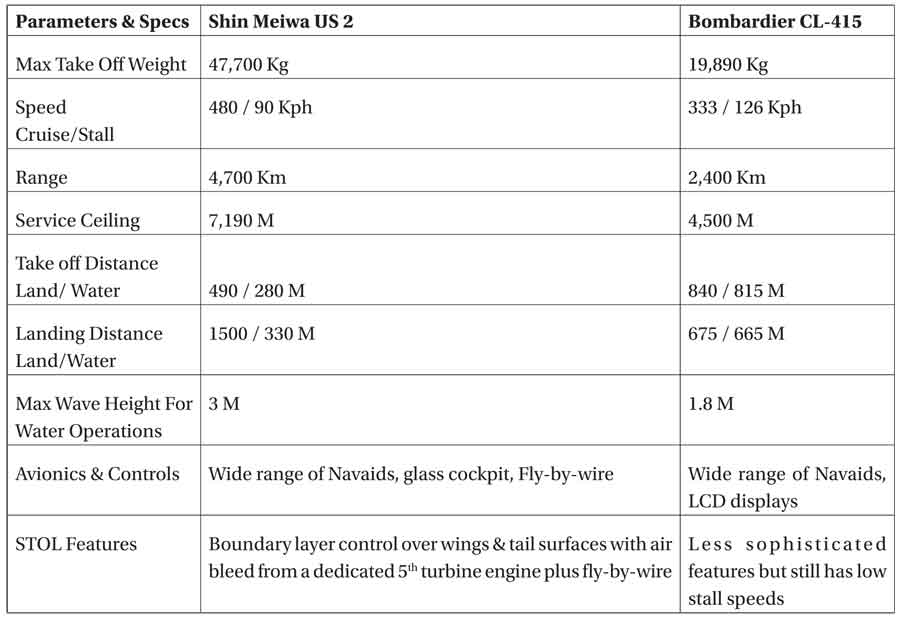 All figures are approximate and from open source publications.

Tilt rotor aircraft such as the V-22 Osprey are another option. However, they lack the payload, range and speed capabilities of fixed-wing aircraft. Wing-in-ground-effect machines have also been tested. However, viable aircraft are not in service yet. Both these types do not at present match the capabilities of amphibians. 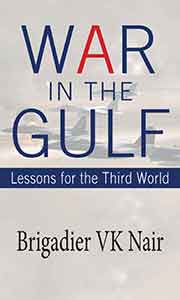 Amphibian aircraft offer some advantages over fixed-wing land or carrier-based aircraft and helicopters. At longer ranges and over open ocean areas, these advantages become more marked. In our context, operations over island territories far from the mainland and with limited infrastructure offer areas of opportunity for inducting larger amphibians. Smaller types can augment the capabilities of surface ships, helicopters and land or carrier-based fixed-wing aircraft. For long range SAR and Special Operations in a marine environment, the amphibian may be the only viable option in specific scenarios. The downside is that very few types are available in the world market.