Military Application of Amphibious Aircraft in the Indian Environment

Amphibian aircraft offer some advantages over fixed-wing land or carrier-based aircraft and helicopters. At longer ranges and over open ocean areas, these advantages become more marked. In our context, operations over island territories far from the mainland and with limited infrastructure offer areas of opportunity for inducting larger amphibians. Smaller types can augment the capabilities of surface ships, helicopters and land or carrier-based fixed-wing aircraft. For long range SAR and Special Operations in a marine environment, the amphibian may be the only viable option in specific scenarios.

Amphibians have the capability to operate both from water and land…

In January 1953, the civil aviation facilities at Kochi (Cochin) were taken over by the Indian Navy and commissioned as INS Venduruthy. The first twin piston-engine Shorts Sealand amphibian aircraft was inducted and a Fleet Requirement Unit (FRU) was set up which grew to two aircraft and five pilots by May 1953. This was the nucleus of the Naval Air Station named Indian Naval Ship (INS) Garuda, Indian Naval Air Squadron (INAS) 550 as well as the start of both Indian naval aviation and military use of amphibian aircraft by the Indian Armed Forces.

With the advent of helicopters, the focus shifted to them and to shore based maritime aircraft, a worldwide trend. The amphibian aircraft of the Navy were phased out in the early 1960s. Some countries such as Japan, Canada, Russia and China have retained amphibians for civilian use like firefighting, transportation between maritime communities, Search And Rescue (SAR) as well as military tasks. Use of large amphibians is restricted to SAR and firefighting roles with smaller amphibians and non-amphibian float planes in widespread use for transportation, especially in areas such as Canada, Alaska, island territories worldwide and in coastal areas of island nations such as Japan. 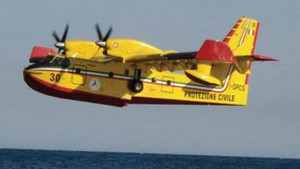 Military roles including surveillance, interdiction of hostile ships, combat SAR, anti-shipping and anti-submarine warfare are performed by larger amphibians but limited in scope with land-based aircraft plus land and ship-based helicopters having taken over most of these tasks. Some entities, most notably the Japanese Self Defense Forces, have still retained a significant capability especially in the SAR field with modern heavy platforms plus highly trained crews. Most of the expertise gained during World War II, especially in open water operations, has been lost.

Amphibians have the capability to operate both from water and land with suitable hulls and flotation devices for water operation and wheeled landing gear for land operation. However, some types have only restricted usage as far as the landing gear goes and these confine their land capabilities to being towed onto land for maintenance and parking. A true capability requires landing gear capable of supporting the aircraft for take-off and landing from runways up to maximum operating weights. Only those aircraft with such capabilities can exploit the full capabilities of amphibians.

Although amphibians do not have the capability to hover like helicopters, they can carry a wide variety of weapons and sensors…

The operational profiles most suitable for large amphibious aircraft generally involve take-off from a shore base with full load using a conventional runway or from a sheltered water body such as a harbor or lake/lagoon, a rapid transit over open ocean at height to the target area, surveillance or patrol at altitude or at low levels in a loiter mode, the option of alighting on the water for purposes of off-loading material or personnel, followed by take-off from water with load, transit to base or another destination and recovery either by landing on a runway or a water body.

Search and Rescue. The peacetime scenarios will be conventional SAR for picking up survivors of ditched aircraft, occupants of surface vessels in distress or evacuation of injured personnel from ships as well as places where runway facilities do not exist. Combat rescue and recovery will involve retrieval of aircrew who have ejected and survivors of damaged/sunk ships, recovery of Special Forces teams and captured equipment. Obviously the tactical situation will dictate the viability of launching such operations and chances of mission success in face of hostile forces. Land-based fixed-wing aircraft and helicopters, land and ship-based, perform these roles. Both these types are essentially capable of operating only in the medium of air whereas the objects of interest are on the water. Helicopters have a plus point in hover capability but landing on even calm water is more of an emergency.

Surveillance of Shipping. Conventional fixed and rotary wing aircraft carry out these roles but are again limited to operation in the air only and not on the water surface. After identification from the air, they can pass on information to base. After that they can either destroy or threaten the target but not physically occupy it without deploying personnel by parachute or, from a helicopter by lowering them onto the target area. Recovery by fixed-wing platforms is not possible and even retrieval of personnel on to the helicopter demands a neutralised combat environment. Only surface ships or submarines can do the latter other than an amphibian aircraft; the former have constraints in terms of speed of response. 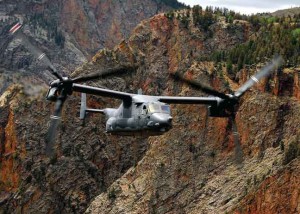 Interdiction. The obvious scenarios are anti-contraband, counter-terrorism, anti-infiltration and anti-piracy operations. Only surface vessels or submarines have the capability to perform these tasks and using the latter is a gross waste of scarce and at times, strategic assets. Speed of response is a constraint and unless surface forces happen to be in the vicinity, they cannot provide swift response. Without physically capturing the people involved, the limited choices are to stand by helplessly or eliminate the target. Amphibians offer far more options.

Anti-Submarine Operations. Seaplanes and amphibians were very effective in this role in World War II. Although amphibians do not have the capability to hover like helicopters, an attribute that enables the latter to deploy sensors like dunking sonars, they can carry a wide variety of weapons and sensors. Their multi-role capabilities, faster sprint speeds and larger radii of action make them more versatile. A plus point is that amphibians are not runway-dependent like land-based aircraft.

When compared to helicopters, amphibians have twice the speed and payload, much longer range…

Logistics Support and Communications. Many maritime communities and bases are solely dependent on ships for supply and connectivity because terrain or space constraints inhibit construction of airfields. The Lakshadweep chain with small coral islands, has limited scope for runway construction. This applies to portions of the Nicobar Islands and terrain considerations create problems in the Andaman Islands group as well. The long North to South spread of these islands makes distances and resultant long transit time for helicopters a problem. Amphibians have an advantage here. Runway damage during natural disasters will also not affect amphibian operations.

In the chart below, performance comparisons of land-based fixed-wing aircraft, helicopters and amphibian aircraft illustrate how they match up against one another. Response time that is dependent on transit speed, operating range and payload capability are the main parameters. Payload delivery mode is another important aspect. 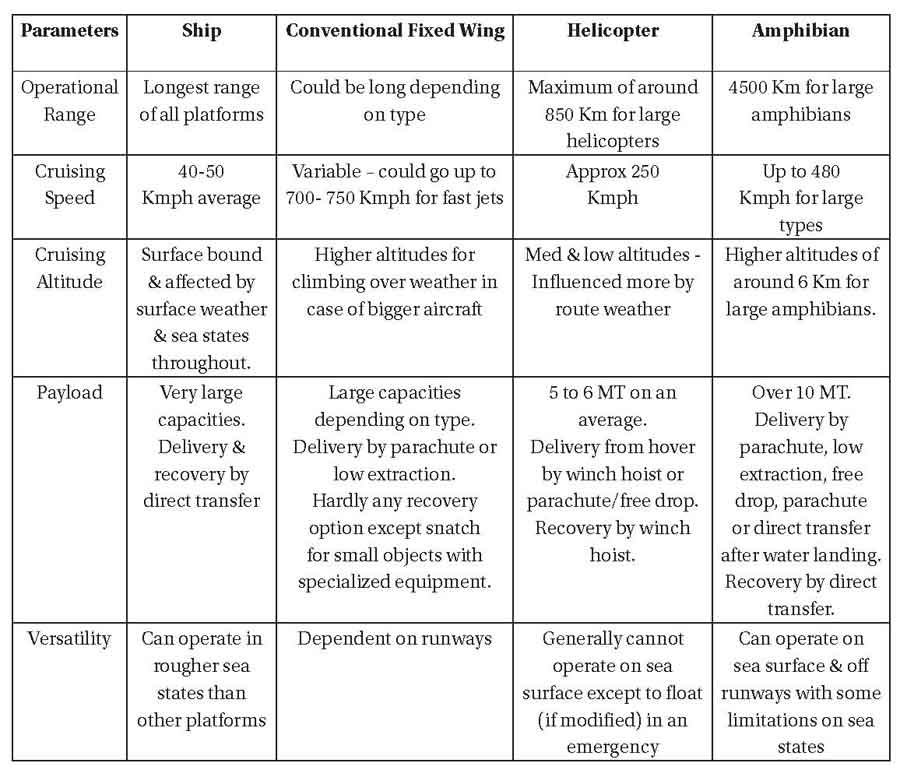 When compared to helicopters, amphibians have twice the speed and payload, much longer range and because of greater fuel capacity and higher cruise altitudes, possess greater endurance. Delivery and recovery options with amphibians are more than that with all other platforms. Recovery destination options include runways and harbour areas or calm water around land or even open water near surface ships. 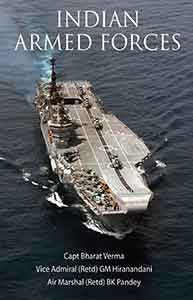 Amphibians are affected by weather conditions such as surface winds and visibility while landing or take-off on water in the same way as on land. In addition, an important factor is the state of the water surface. Wave heights (amplitude measured from crest to trough) and wave lengths (frequency measured from crest of one wave to the crest of the following/preceding wave) are the major factors. Both are, in turn, influenced by surface winds and sea currents and in waters closer to shore, by the sea-bed also. Waves speed up as the water becomes shallower and this reduces wave length while increasing wave heights. Open and deeper water is less influenced by the land and true open water conditions exist from 150 to 200 km from the coast. Modern amphibians can operate on high seas with wave heights of up to three metres provided wave lengths are above 80 metres. Such conditions generally exist in open waters except in adverse weather conditions. No other aerial platform has this capability.

Aircraft like the four- engine Shin Meiwa US2 amphibian have a Short Take-off and Landing (STOL) capability. Sophisticated boundary layer control uses bleed air fed from a dedicated fifth engine and directed internally and externally over the flaps, wings and tail surfaces and also to deflect propeller wake flow downwards. Design features are incorporated to deflect water spray downwards and away from propellers and engine air inlets to minimize ingress into the engine. These measures reduce landing and take-off speeds, considerably reduce take-off and landing distances as well as guard against water ingestion damage. Low speeds of down to 90 kmph are claimed along with the ability to operate in wave heights of up to three metres. This not only gives a significant open ocean operating capability but also STOL capabilities for operating in restricted areas over land and small water bodies.