The second test firing of the Hard and Deeply Buried Target (HARDBUT) Next Generation Multiple Warhead System (NGMWS) was carried out successfully at the Biscarrosse test range of DGA Essais de Missiles on 14th September 2010. The HARDBUT Technology Demonstration Programme (TDP) is a successful warhead research programme jointly funded by the UK MoD and French Direction Générale de l’Armement (DGA) with MBDA UK as the Prime Contractor. The NGMWS is designed to defeat a wide range of targets such as command and control facilities, infrastructure and underground facilities including caves, reflecting current and potential future operations. 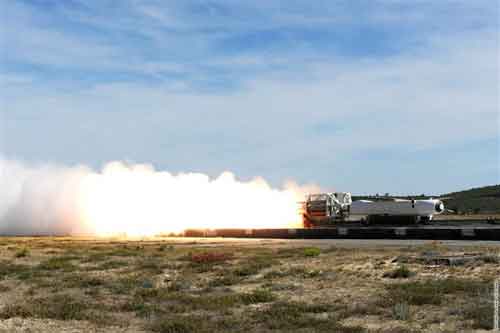 The firing was carried out using a representative missile airframe on the long rocket sled test track at Biscarrosse. The live Precursor Charge (PC) was detonated just in front of the massive concrete target and the inert Follow-Through Bomb (FTB) penetrated through and exited the rear face of the target, demonstrating a penetration capability significantly in excess of any warhead currently produced by MBDA. The trial was also designed to assess the robustness of the compact Ruggedized Electronic In-line Fuze (REIF) which will incorporate embedded smart fuzing algorithms. The target and trial set-up were designed to be operationally representative.

This trial builds upon the successful 1st trial conducted at the Biscarrosse test range on the 18th May 2010, where the novel concepts underpinning the NGMWS design were successfully demonstrated.

The MBDA team has now twice successfully demonstrated the performance of this new warhead design by perforation of massive concrete targets, together with successful recovery of the inert FTB and fuze from the capture butt. This represents the successful conclusion of the second stage of this TDP, proving the warhead concept and enhancing MBDA’s world leading capability in warhead design. A third and final proving trial will conclude the TDP research objectives.