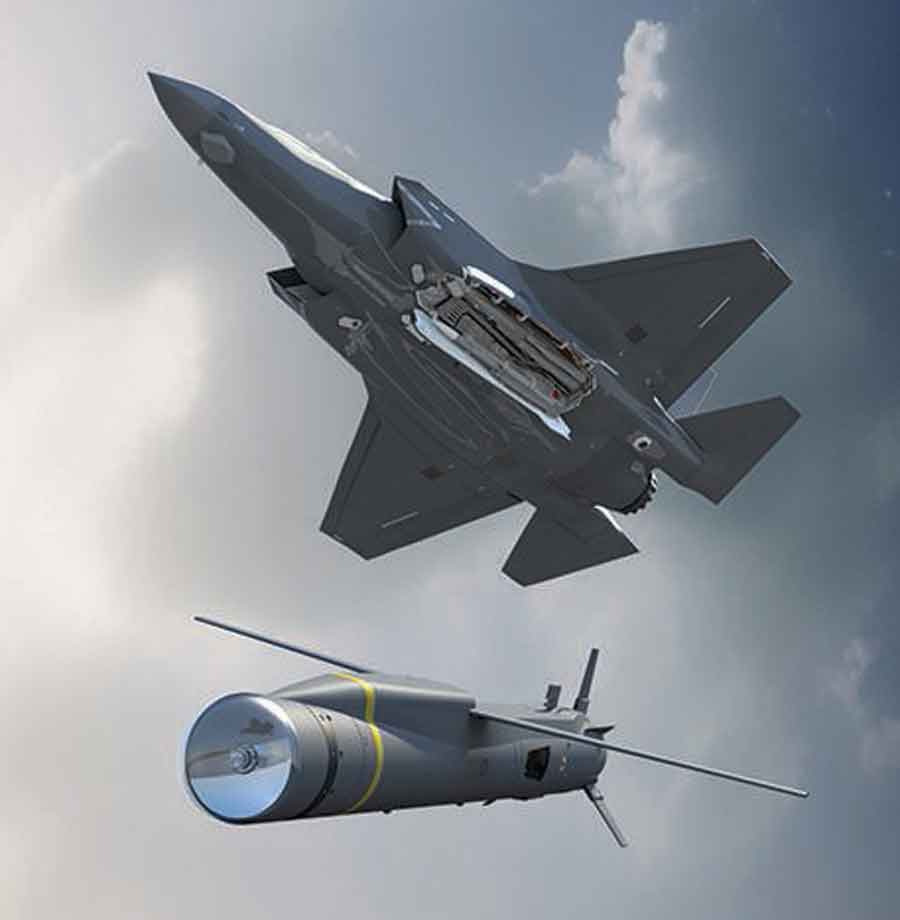 MBDA highlighted a large model of the JSF F-35 equipped with a suite of the company’s latest range of air-launched guided weapons. To provide the UK RAF’s F-35 with an air-to-ground high precision capability, MBDA is developing an advanced, network-enabled weapon known as SPEAR. This 100kg class, 100km range weapon, eight of which can be loaded into the JSF’s internal weapon bays, is powered by a turbojet offering increased standoff and end-game agility when compared to glide weapons.

In addition, the missile features a multi-mode seeker, a multi-effect warhead and data-linking and has the capability to strike a spectrum of surface targets either static or moving/manoeuvring at speed regardless of the time of day or the weather conditions. Aircrews can plot the missile’s intended flight path before launch with mission-planning software. Mid-course guidance is provided by a combined GPS/INS system with a two-way data-link allowing for midcourse updates, re-targeting and, if required, mission abort. Development is advancing at pace and next year should see the first test drops carried out from a Eurofighter Typhoon.

The Beyond Visual Air to Air Missile (BVRAAM) Meteor involves six different nations and integration on three different aircraft, Rafale, Eurofighter Typhoon and Gripen and is also aimed at the Block 4 upgrade package of the F-35. Meteor features a ‘no escape zone’ far superior to any other existing or planned weapon. The BVRAAM benefits from a throttleable ramjet propulsion system that ensures maximum speed and maximum agility are available even at extreme range.

ASRAAM is already in service with both the UK and Australian air forces on the Typhoon and the F/A-18 respectively. It has been designed to dominate the ‘within visual range’ combat mission and it is also a weapon that has been contracted for integration on the F-35. The concept behind ASRAAM’s development was to provide unmatched speed and agility thereby giving the pilot the ability to engage the enemy, fire and break away without risking either himself or his aircraft in the uncertainty of a dogfight. Not only is ASRAAM able to defeat all other short-range missiles in close-in combat, giving the pilot the all-important combat advantage of first shot, first kill, the weapon also has an uncontested maximum range in its class.

A key requirement for the MMP is to function as both a fire-and-forget and the man-in-the-loop weapon.

MBDA’s land weapons portfolio has been given a boost by a recent French Ministry (DGA) contract for more than 2,800 Missile Moyenne Portée (MMP) anti-tank missiles worth some €500 million with first deliveries expected in 2017. The new weapon, which will equip ground troops and special operations forces, will replace the aging Milan and Spike missiles.

A key requirement for the MMP is to function as both a fire-and-forget and the man-in-the-loop weapon.

MMP’s export potential is seen as a vital factor for the sale to the French Ministry and MBDA is targeting India by offering the advanced anti-tank weapon as a basis for a co-development to meet the Indian Army’s requirements.