In a scenario representing the protection of a sensitive zone against weapons launched from a secure distance, VL MICA has once again demonstrated the high level of its operational capabilities. 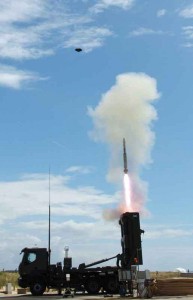 On the 13th April 2011, at the French DGA-Essais Missiles test centre in Biscarosse, South West France, a VL MICA missile launched from a ground based vertical launcher and controlled by a Tactical Operations Centre (TOC) developed by MBDA, intercepted a manoeuvring target flying at medium altitude and at a range greater than 15 km.

The objective of the test firing was to demonstrate the capabilities of the VL MICA system against precision weapons launched from a stand-off range. Organised by MBDA with the support of various DGA (Direction Générale de l’Armement) teams, the test was a natural follow on from the evaluations which have just been concluded by the French Air Force as part of their SALVE (Sol-Air à Lancement VErtical) technical demonstration programme.

The VL MICA was equipped with an active electromagnetic seeker produced by Thales. As in previous evaluations, this firing was carried out using a Conteneur Lanceur Autonome (Autonomous Launch Container) conforming to a standard series production model.

This seventeenth VL MICA firing is yet another demonstration of the reliability, exceptional precision and, most importantly, the high level of operational performance provided by the system.

The four foreign delegations present as observers during the firing were unanimous in underlining the excellent impression made by the VL MICA system which has already received several orders in both its naval and land versions.