“MBDA has two exciting focuses during DEFEXPO 2020: providing the highest performing missile technologies to India, and secondly delivering on Make in India as part of our longstanding partnership strategy with India.

DEFEXPO 2020 is timely as it falls soon before the arrival in India of the first Rafale fighter aircraft for the Indian Air Force, which brings with them a truly game changing set of weapons from MBDA – most notably the SCALP deep strike missile and Meteor air-to-air missile. These are the highest performing missiles of their type available anywhere in the world, providing India the ability to stealthily strike deep at enemy targets and to dominate totally in air combat.

MBDA has been actively working in partnership with India’s government and industry to build India’s defence industrial capabilities for over 50 years. Over this time, many tens of thousands of MBDA- designed missiles have been built in India and we continue to deepen and deliver on new programmes.

Today for example, there is extensive manufacturing by Indian industry of 15 major sub-assemblies of the MICA missile that arms both the IAF’s Mirage 2000 and the soon-to-arrive-Rafale fighters. These subassemblies impressively cover a wide range of complex technologies such as hi-specification mechanical, electrical, electromechanical and pyrotechnic items. Similar transfers to build India’s defence-industrial ca pabilities has also occurred on the Mistral and ASRAAM missiles, including ToT for setting up industrial capabilities for missile final assembly and integration testing.

An excellent highlight of our focus to provide the best missile technologies to India and to delivering on Make in India is the news that L&T MBDA Missile Systems Ltd has submitted its first bid to the Indian Armed Forces. The JV’s offer of Sea Ceptor, the latest generation of naval air defence system, is its RFP response for the Indian Navy’s Short-Range Surface to Air Missile (SRSAM) requirement, and is offered with the aim to Make in India. When you consider L&T MBDA Missile Systems Ltd only made its debut at the previous edition of DEFEXPO, you can see the strength of our commitment to Make in India and the level of investment made by MBDA to mature this joint venture at rapid pace. We expect to make further exciting announcements on the rapid development of L&T MBDA Missile Systems Ltd later this year. 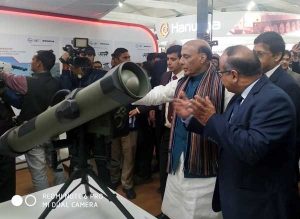 Together MBDA and L&T MBDA Missile Systems Ltd will present a comprehensive portfolio of many other high performing missile technologies at DEFEXPO 2020, however three are particular systems worth highlighting: ATGM5, Exocet MM40 B3, and Mistral ATAM.

Drawing on the next generation technologies of the MMP battlefield anti-tank weapon as the advanced successor to the highly successful MILAN, ATGM5 will be designed and manufactured in India to meet India’s specific operational requirements. It will be a true Indian Designed, Developed and Manufactured (IDDM) product, involving the transfer of next generation key technologies to India, boosting the Indian defence industry sector.

Exocet MM40 Block 3 is the latest version of the famous Exocet anti-ship missile family, with extended range of out to 200 km. The Indian Navy already operates the Exocet SM 39 from its submarines and could benefit from using Exocet in other operational areas.

The Mistral ATAM air-to-air missile launcher has been delivered to India to equip the ALH and LCH. Mistral has proven itself a major success story with a 96% success rate in all firings. MBDA will exhibit at DEFEXPO 2020 this very high-performing missile also as a man portable air defence system (MANPADS), which performed exceptionally well in India’s firing trials.