The F/A-18 was selected also because it has a proven role as a node on the netcentric spectrum. Northrop Grumman and the US Navy recently collaborated on a test of netcentricity that involved the F/A-18 Hornet along with Fire Scout, the E-2 Hawkeye [about which more later] and a simulated aircraft carrier that offered “proof of concept” of these communications linkages now considered vital for national security operations and which, after all, are the focus of much of this conference. 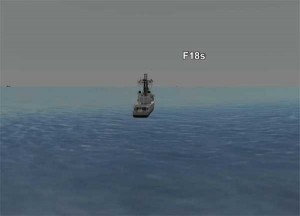 Also playing in our scenario today is the workhorse of low and medium altitude surveillance of the maritime environment: the multi-engined, long-endurance antisubmarine warfare platform that also functions in the surface monitoring role. We have chosen the P-3 which is still the US Navy’s ASW aircraft — and that of many other naval forces throughout the world. It could just as easily have been the Il-38 or the An-142 in service with the Indian Navy or the developmental P-8 which both the US Navy and the Indian Navy have chosen for their next-generation assets in this regard. The ASW mission generally requires operation at lower altitudes to optimize the capabilities of the magnetic anomaly and sonar buoy submarine detection capabilities of the platform. Low-and-slow somewhat limits their utility in long-range surface detection, but their large capacity and crew size make them ideal platforms for flexibility and command-and-control as a contribution to netcentricity.

Enter the fixed wing unmanned aerial vehicle. This is the primary platform in the “everybody-does-it” sweepstakes. The Israelis, of course, are the past masters of the fixed wing UAV technology, especially in the smaller categories. But we read almost daily of the exploits of the Predator armed and unarmed surveillance drones in the antiterrorist operations along the Durand Line. Other UAVs range from tiny, hand-held and launched tactical “snoopy” drones to the ultra-high-altitude platforms like Northrop Grumman’s own Global Hawk. In our scenario today, the fixed wing UAV is the “bad guy’s” vehicle of choice as you will see.

And then there is the vessel [or vehicle] of interest or VOI, the proverbial needle in a haystack that our intrepid “netcentrists” must locate in order to prevent the calamity that is the focus of our fictional, but entirely plausible scenario.

Finally, tying it all together, as you have already seen it in the preamble — we have the E-2 Hawkeye. This is the proverbial eye-in-the-sky, which though it has been around for awhile in one avatar or another, is still without equal in the situational awareness field. The next-generation E-2D is just now completing advanced testing preparatory to entering production for the US Navy and international customers.

It is the “top cover” for the netcentric continuum, simultaneously viewing the aerospace environment from the surface to the stratosphere a full 360 degrees around. Maximized automation favors the small necessary crew and small crews mean reduced costs. Though designed to be flown from big-deck aircraft carriers, Hawkeye is equally at home operating from fixed bases, a capability that is being expanded in the new generation through increased fuel-carrying capacity and an aerial refueling capability.

We join the scenario with friendly forces searching for the threat vessel amongst many neutral or “white” vessels. The first goal is to find the Vessel of Interest (VOI), and then stop the threat. You will see how the resources can be used to find, fix, and target the threat. The vessel of interest is a standard commercial tanker that has been seized and taken over by the “enemy”. The vessel has all the signatures of a typical merchantman: from speed and tonnage to radar signature.

The team leader of the portrayed scenario is the E-2 Hawkeye which maintains radar contact with all the players, guides the fighters to an attack solution and provides command and control for the entire operation.

The search begins for the vessel of interest which is hiding amongst the hundreds of neutral coastal vessels. The Fire Scout and the E-2 operate in a coordinated and integrated partnership.

The E-2 begins to ID and track all the vessels.

Vessels that are suspect are investigated at closer quarters by the Fire Scout. Also note that in the scenario, we can model environmental phenomena such as clouds or rain. The container ship appears to be neutral, not our “bad guy”. Note that you are seeing the actual sensor feed that is being generated by the computer model.

Here is a depiction of the Fire Scout radar display.

The entire radar picture is networked and we begin to separate the wheat from the chaff. Note the red icon. It looks like our vessel has been located!

The Fire Scout moves in for a closer look while staying a “safe” distance from the vessel.

The P-3 is guided toward the VOI by the E-2 — as a show of force — and under the watchful eye of both the Hawkeye and the Fire Scout.

A Coast Guard cutter is directed toward the vessel by the E-2.

The quality of the Fire Scout electro/optical sensor can even detect personal moving about the deck of the ship. It also detects the generic fixed wing UAV about to be launched.

The enemy UAV launches and flies toward it target: either an oil platform or the nuclear facility on the mainland.

The Hawkeye detects the launch and directs the fighter against the threat.

A positive ID is established and the fighter launches an air-to-air missile which destroys the UAV.

Meanwhile, the Hawkeye keeps the tanker under constant surveillance, backed up by the P-3, until the cutter can arrive on the scene. End of scenario!

In summary, while I hope that our little show has captured your interest, it is important to bear in mind that tremendous amounts of data are being generated and captured for each depicted platform. The information thus generated becomes integral to the overall objective of maritime domain awareness and allows the day-to-day planners to “place in the can” contingency plans to facilitate timely response to an emergency. The key to maritime security is the ability — to the maximum extent possible — to anticipate the unexpected in a very unpredictable world.