Manipur Ambush: The Real Lesson we need to Learn 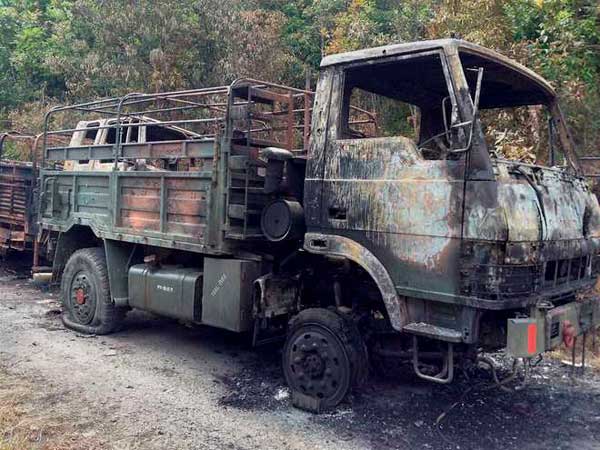 The ambush of the 6 DOGRA convoy, in Manipur, resulting in the tragic death of eighteen soldiers and injuries to many more has brought out a virtual deluge of comments on what went wrong and the corrective actions needed to be initiated. The Government too asked the army to adopt proactive measures to control the situation that, as per Major General R Singh, Additional Director General Military Operations, has already resulted in considerable success being achieved during the conduct of interdiction operations against the suspected groups involved in the vicinity of the Indo-Myanmar border.

While the exact location or troops involved was not specified, there is speculation that it was conducted by the Special Forces inside Myanmar, where these groups are suspected to be camped, with the cooperation of the Myanmar Government and Army. It certainly represent a welcome change in the Government’s response to cross-border attacks and may even have a salutary effect on cross-border attacks from Pakistan Occupied Kashmir. It also needs to be remembered that all active combat operations will not necessarily end in success, and failure, due to human error, circumstances or luck, is a distinct possibility and must be accepted with equanimity. Off course, all forces aim to achieve success because the cost of failure, as we can see, tends to be very high.

As is usual in these circumstances most comments and suggestions emanate from those who either have an axe to grind, or, from those who have little understanding or experience of counter insurgency operations at the ground level and even less knowledge of either the terrain or the area involved. To suggest that following of Standard Operating Procedures (SOP’s) and Road Opening drills implicitly would have dissuaded the militants or avoided the ambush is being disingenuous, to say the least. It would be fair to suggest that most commentators had never heard of Moltuk or ever travelled on the New Samtal Road before this ambush. If they had, they would not have raised questions about whether Road Opening Parties (ROP’s) had been effectively deployed or not, because they would have been aware that terrain conditions are such that ambushes can be sprung anywhere along the road and effective sanitization would be prohibitive in terms of troop requirement.

Certainly complacency, over-confidence, poor discipline and a host of other factors resulted in this tragic situation and blame for that can and must be apportioned not just at the unit level but also at higher levels as well. The reported absence of the Commanding Officer while the unit is being de-inducted reflects a level of complacency within the hierarchy till the very top. It is, however,also worth noting that SOP’s are prepared by staff officers covering every contingency under ideal conditions. To suggest that they can be strictly adhered to on the ground when under fire is to be unaware of the realities of such situations, though adherence or otherwise is a clear indicator of quality of leadership, unit morale, motivation and standards of training.

Sadly, while much energy is spent on procuring big ticket items with limited utility, the focus required to ensure that the infantry is provided with equipment…

Much has also been made of intelligence having been ignored. It is more than likely that actual actionable intelligence was never provided since it is extremely difficult to come by, especially from intelligence agencies. However, general warnings about an imminent attack may have been made available, but such intelligence assessments and inputs have very limited value and tend to be ignored, lacking credibility as they tend to be issued routinely.

From the military point of view while tactical lessons need to be drawn and mistakes rectified, it is worth contemplating as to the reasons why technology has not been utilized to provide troops with better protective capabilities. What holds back the organization from providing units involved in such operations with Mine Protected Vehicles (MPV’s), Anti-IED Jammers and even hand –launched drones is a question that needs answers. The latter should certainly go a long way in providing real time surveillance of convoy routes and make ROP’s so much simpler and less troop intensive. Sadly, while much energy is spent on procuring big ticket items with limited utility, the focus required to ensure that the infantry is provided with equipment that can greatly enhance its surveillance and protective capabilities in operational areas is lacking and not given the priority it deserves.

The real question, however, that we need to be asking ourselves is whether Manipur is really afflicted by an insurgency today, as the establishment would have us believe? To solely associate the prevalence, or otherwise, of violence to insurgency is to disregard its very definition, which requires the movement to have popular support. The truth is that right for decades Manipur has had a popularly elected local government staunchly supported by the people. While there has been discontent in the Naga areas that would prefer to be a part of Nagaland, given their ethnic and tribal loyalties and the state of development, the fact is these are internal issues that require deft political handling to be resolved. Certainly, Manipur faces a serious law and order problem that appears to be beyond the control of the state police, but that in no way can be attributable to a hostile local population.

…it gives the hierarchy an ideal platform for ensuring the units undergo “live training” in combat conditions that appear to be becoming the norm as chances of conventional wars appear to reduce.

While the deployment of the army in counter insurgency operations is detrimental   for all stake-holders, it is unavoidable when the State is unable to provide governance due to internal rebellion. In the normal course, the Army, with its attendant legal backing provided to it (AFSPA), is expected to neutralize militants and ensure sufficient decrease in levels of violence that a political solution to meet the aspirations of the local population can be arrived at by the government.  However, if the Government, for whatever reasons, is either unable or unwilling to provide a solution acceptable to the local population, it would be logical to assume that the insurgency would gather more support and progress into a civil war in which the rebels would confront the Government with conventional forces in a civil war, as did the LTTE in Srilanka. If the popular uprising succeeds we witness the birth of a new state, otherwise in defeat violence again reduces to levels where the Government in power can re-establish its authority.

Despite the hardships and difficulties that the Army faces in counter insurgency operations, there are some advantages that accrue as well. For one, it gives the hierarchy an ideal platform for ensuring the units undergo “live training” in combat conditions that appear to be becoming the norm as chances of conventional wars appear to reduce. It also gives commanders and units opportunities to prove their worth, other than having to do so with their oratorical skills in war games or administrative prowess in organizing social, training and sporting events on which career progression depends in a peace time army.   In addition there is some additional financial remuneration in terms of allowances as well, but what actually adds value is the shift in power equations.

A peace time army that is increasingly given short shrift by the political leadership and the bureaucracy and has little contact with civil society suddenly finds enhanced feelings of self-worth as it is required to take a dominant role in such areas. The District Commissioner who otherwise only interacts with a Brigade Commander or above is suddenly willing to socialize with a company commander because his security and functioning depends on this. The Army, given its new found authority, finds that its ideas and actions matter to the community at large. Not necessarily a bad thing, given their intense patriotism and unbiased approach to ethnic and religious matters, because they have an opportunity to enhance governance and unity in the region.

…troops deployed on ground, who quickly understand the reality of why they have been deployed, lose focus, become demotivated and complacent, open to incidents such as the one that 6 DOGRA faced.

However, in some states in the North East and specifically in Manipur, we witness the unique phenomena that so called “insurgencies” never seem to complete the logical cycle and violence remains at levels where the local government continues to function but insists on using the Army to maintain, what is essentially, a law and order problem. This ensures that the state receives ample funding from the Centre, the usage of which is difficult to check due to prevailing levels of violence. With lack of accountability, large scale corruption, at all levels, is unavoidable.  The truth is that over the years the local population has been held hostage by criminal gangs working in connivance with politicians, bureaucrats and elements of the security and intelligence establishment that have gained financially and politically by ensuring the status quo. While one would like to believe that the Army has only been an unwitting tool in perpetuating the status quo with its counter insurgency efforts, the truth, one is forced to admit, may be otherwise.

It is high time that the cynical use of AFSPA by local and central governments for personal aggrandizement, monetary and political gains is seen for what it really is. It is essential that the Army carry out regular independent re-assessments in areas it is already deployed, such as Manipur, and be clear as to whether it is involved in policing duties or is actually conducting counter insurgency operations against a hostile population. Just because a government is willing to declare AFSPA is no justification for Army deployment if ground realities do not dictate so. Otherwise, troops deployed on ground, who quickly understand the reality of why they have been deployed, lose focus, become demotivated and complacent, open to incidents such as the one that 6 DOGRA faced. An action, the sole aim of which may have just been, to keep the pot bubbling and ensure the status quo and not the nefarious designs of the Chinese PLA or Pakistan’s ISI, as some experts would have us believe.

7 thoughts on “Manipur Ambush: The Real Lesson we need to Learn”