Maldives – in path of Chinese squall 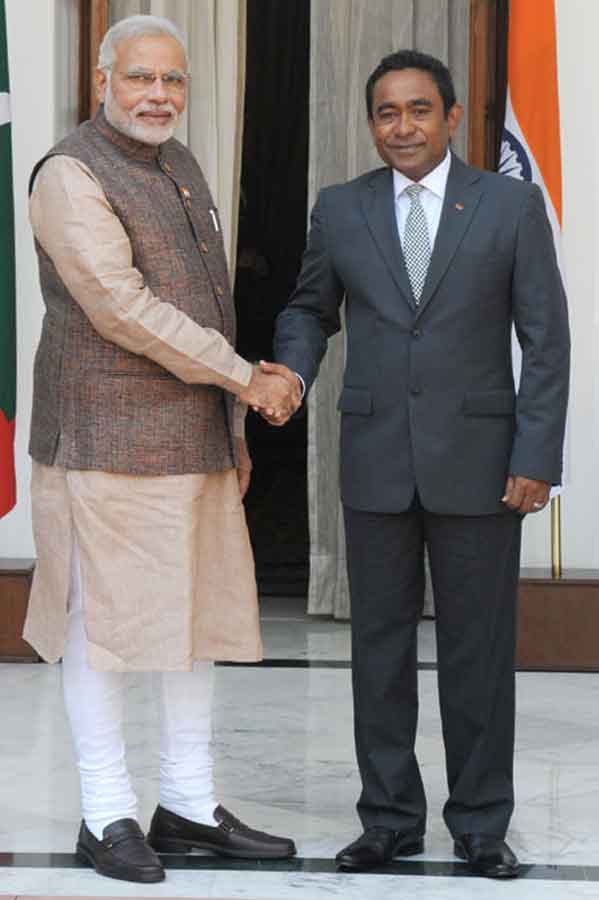 The Prime Minister, Shri Narendra Modi with the President of the Republic of Maldives, Mr. Abdulla Yameen Abdul Gayoom, in New Delhi on May 27, 2014.

As per media reports, Maldives president Abdulla Yameen has written to Prime Minister Narendra Modi to assure him that there will be no militarization in the Indian Ocean. This was obviously in response to recent Indian concerns about the recent constitutional amendment which allowed foreigners to own land in the island nation.

Earlier on July 23, after ratifying the constitutional amendment that was passed by the Parliament, Yameen had publicly stated, “The Maldivian government has given assurances to the Indian government and our neighbouring countries as well to keep the Indian Ocean a demilitarized zone.” Indian concerns were quite natural because Maldives is located about 600 kms off the southwest coast of India and 750 kms southwest of Sri Lanka. Maldives consists of a double chain of 26 atolls spread over 90,000 sq kms of territory. It has over 1000 islands that are uninhabited and the country appears getting radicalized at fast pace. Its geostrategic value lies in its location astride three of the most important SLOCs through which most of India’s trade and oil requirements pass, apart from its close proximity to India and Sri Lanka.

The manner in which militarization of the IOR is taking place raises the possibilities of conflict. The aggressive stance of China despite her peace homilies raises troubling questions about the motive behind China’s Maritime Silk Route…

PM Modi’s visit to Seychelles, Mauritius and Sri Lanka earlier this year to deepen India’s focus on the IOR also was to include a visit to Maldives as per original plans but this had to be shelved because of the instability in that country because of the arrest of former President Mohamed Nasheed purportedly on dubious charges, with the Commonwealth Ministerial Action Group (CMAG) contemplating to  place Maldives on the formal agenda over the arrest.

It is a moot question whether Yameen’s statement and letter to Modi was of his own volition or on behest of Chinese pressure through back channels considering that post the recent coup of sorts in Maldives that led to removal of President Nasheed, news reports had been emerging of the Maldivian Defence Forces (MNDF) leaning towards a China-Maldives Defence Pact on behest of Yameen.

As regards the statement about not letting Indian Ocean get militarized, isn’t that being said by every country where China has got her foothold on the pretext of trade, development and peace mirroring the ingress of British East India company in the Sub Continent? The manner in which militarization of the IOR is taking place raises the possibilities of conflict. The aggressive stance of China despite her peace homilies raises troubling questions about the motive behind China’s Maritime Silk Route, an umbrella term referring to maritime infrastructure projects in the Indo-Pacific region, port developments in Myanmar, Bangladesh and Sri Lanka included.

For India, the vital concern is that China’s militarization of the IOR is proceeding both by land and sea bid to even hedge in the Indian Navy. The littoral states and islands like Maldives are increasingly becoming strategically important with Chinese port and other development project aimed for eventual military use when required and Cocos (Keeling) Islands possibly being developed as US military base in conjunction Australia.

It is significant to note that new land laws promulgated by Maldives requires minimum foreign investment of US$ 1 billion and 70 percent of land will have to be reclaimed, which is chickenfeed for China.

Access to and control of islands through military and commercial initiatives was initiated as part of Chinese strategy to establish itself as a maritime power concurrent to extending her EEZ arbitrarily and claiming territories within the nine-dot line in Asia Pacific and going full steam to establish in ports ringing and within the IOR through economic-cum-military ventures as strategic objectives. It wasn’t coincidence that when the Fiji President (who had attended the Defence Services Staff College in India) ousted 3500 Indian business families from his country, an equivalent number of Chinese business families slipped quietly into Fiji.

More than a decade and a half back, China had established the biggest mission in far away Seychelles and had signed an MoU with them to establish ‘refueling facilities’ (read establishing a base) in outlying islands of Seychelles for use by ‘China, Seychelles and Friendly Countries’. Over the past decade, China engaged in ports development projects in Myanmar, Bangladesh, Pakistan and Sri Lanka, Chinese eco­nomic ties with Africa, and the concomi­tant rise in its naval profile across the IOR have been conspicuous.

It is significant to note that new land laws promulgated by Maldives requires minimum foreign investment of US$ 1 billion and 70 percent of land will have to be reclaimed, which is chickenfeed for China. China has been already demonstrating her prowess of land reclamation in both ECS and SCS, and has invested US$ 47 billion in Pakistan under pretext of developing the CPEC with the ultimate aim of basing her nuclear submarines and land based air support her CBGs in the IOR at Gwadar.

In the same context, the magnitude of Chinese investments like in Sri Lanka (Colombo and Hambantota) is aimed at retrieving the value in strategic terms. The Colombo South Container Terminal (CSCT) controlled and run by a Chinese company is better suited for submarine dockings but also has become a Chinese enclave. Same goes for Hambantota. nLast year, a Sri Lankan media report war reproduced in China Daily stating that China plans to build 18 bases in the IOR. China denied such plans but it is pertinent is that the original article not only outlined a blueprint for the establishment of 18 Chinese “Overseas Strategic Support Bases” in the IOR, but also recommended three specific categories of such facilities: fueling and material supply bases for peacetime use (Djibouti, Aden, and Salalah); relatively fixed supply bases for warship berthing, fixed-wing reconnaissance aircraft and the naval staff ashore rest (Seychelles); and fully functional centers for replenishment, rest and large warship weapons maintenance (Gwadar in Pakistan). Gwadar in Pakistan, gives China immense strategic advantage because of its proximity to the Persian Gulf and the Straits of Hormuz. That tunneling for Chinese missiles in Gilgit-Baltistan has been underway past two years in no secret either.

What has increased the strategic importance of Maldives in Chinese eyes is the advent of ISIS in Af-Pak – the American ace to hinder growing Chinese influence in the region that would make China’s Gwadar dream that much more difficult.

Chou-en-Lai visiting Pakistan in February 1964 had advised Ayub Khan to prepare for prolonged war with India and raise a militia to fight in India’s backyard, which perhaps tickled Ayub pink and aided him launch Operation Gibraltar the very next year. But what is important here is that China has assiduously followed Chou’s policy of ambiguity and deceit and exploiting sub-conventional war for strategic advantage. That is why China supported Pakistan in the latter, using Pakistani proxies in the process to her own advantage.

Maldives being a nation with some 1192 islands of which some 100 are tourist resorts and another 80 upcoming resorts attracts about 90,000 tourists annually. Then there are about 34,000 foreign employees, all this adding up to an ideal setting for sub-conventional power play. So the China-Pakistan nexus using LeT as vanguard succeeded in radicalizing Maldives over the past decade plus, imparting terrorist training to Maldivian youth on Pakistani soil and germinating anti-India sentiment. Maldivian youth joining the ISIS has added fuel to the fire. So China-Pakistan have this Sword of Damocles hanging over Yameen’s head with the power to terrorize Maldives US$ 100 billion tourist industry – the mainstay of the country’s economy.

Chinese firms replacing Indian firm GMR in the Male new airport development project were indicators of the shape of things to come. Now already Chinese companies have reportedly been handed over some islands for developing them as tourist resorts. But more significantly, the main opposition party had alleged in January this year that a Chinese military base is to come up at one of the atoll’s in Maldives. What has increased the strategic importance of Maldives in Chinese eyes is the advent of ISIS in Af-Pak – the American ace to hinder growing Chinese influence in the region that would make China’s Gwadar dream that much more difficult.