Editors Comment: As a first the Ordinance Factory manufacturing the AK-203 Assault Rifle with Russian design and technology is the first truly Make in India project. This Factory is headed by a serving Major General of the Army, another first and truly game-changing initiative.

For a very long period since Independence, the Indian Army has been following the British Colonial era laid down Model of referring to the Government its requirements of provisioning modern ‘state of the art’ Arms, Ammunition and Equipment prioritised needs.

The decisions in the Government circles are taken by nameless bureaucrats who have little knowledge of the intricacies of the Forces’ requirements but are good at either cutting down the expenditures or at passing the buck and thereby delay decision-making by asking the DRDO, OFB or Defence PSUs to develop indigenous versions of the same.

These worthy entities have no answerability to the Armed Forces HQs and they take their own time and after failing, they are permitted by the Defence Ministry to go for expensive ‘Transfer of Technology’ (ToT) contracts with foreign manufacturers after protracted negotiations, to first assemble these items in India from Semi Knocked Down (SKD) parts, and after about two years, to make technologically less challenging parts in India through their captive vendor base. The whole process takes about 8-10 years and costs double! This is what has been happening in India over the last six decades.

The country has never been able to innovate and quickly make new arms, ammunition and equipment suiting the unique needs of our Forces. We have also not been able to make a dent in the lucrative international armaments exports market and earn potentially huge sums in dollars. Whereas other ‘smart’ countries source funds for their next generation of weapons and armaments development primarily through premiums charged on imports by ‘dumb’ countries like India and Saudi Arabia! The obvious remedy to this is, “Desh badhalna hei toh, Hamko bhi badhalna hoga!”

Considering the successful models adopted by different countries, India can surely achieve self-sufficiency in arms, ammunition and equipment for its Army by adopting a Policy of self-reliance within the Army. The Army urgently needs to set up the following R&D Institutions and Allied Base Workshops to carry out successful and fast prototype(s) development and pilot production activities:- 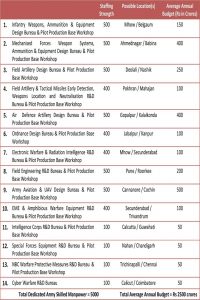 The Army’s R&D Establishments and Pilot Production Facilities should be placed under the control of the Vice Chief at Army HQs. The Budget for this Priority effort should be directly sanctioned by Army HQs without having to go through any Line Directorate.

This Budget should have the special provision for carry-over of funds after the Financial Year gets over.  At the VCOAS level, close coordination will have to be kept with the existing manifestations of the Ministry of Defence (MoD) like DRDO, OFB, Defence PSUs, CSIR, Atomic Energy Commission, ISRO, IITs & IIS, and Industry Associations for tying up collaborative efforts and to ensure speedy manufacture within India. This essential seeding effort in the Army’s Basic Contemporary Technical and Field Requirements R&D, has become warranted and inescapable.

Since the Army’s in-house R&D efforts are meant for the most urgent operational requirements, this Budget expenditure should be covered under the Field System of Accounting, so that expenditure controls are kept simple, practical and effective. The most competent lot of personnel in the Army, having the brains and talent for innovation and research should be posted to these R&D Establishments / Design Bureaus. They should be given up to three consecutive tenures in the normal course, so that in-depth knowledge in the respective specialised field matching world standards is gained, and continuity of work and optimum productivity gets achieved. No additional manpower should be authorised to the Army to start these Establishments.

Where there is good progress and chances of break-through, such efforts should be immediately reinforced with additional Budgetary allocations. The complete control of these R&D Establishments and nascent Production facilities should remain with the Army always, otherwise gainful momentum, motivation and commitment would get lost. The Army’s work culture and thinking orientation needs a change, and it cannot keep passing its problems to other people who do not have any clue.

Like the Japanese Army after the successful but high numbers of casualties Russo-Japanese War of 1905, which went into a massive overdrive to modernise itself to better the then existing standards of the European Armies, the Indian Army too has to take the driver’s seat to ensure its swift modernisation and assured efficient conduct in the future battlefields. Under Deng Xiao Peng, the Chinese Army underwent the same type of modernisation after the disastrous invasion of North Vietnam in 1979.

All Defence R&D efforts were placed under the Scientific Affairs Committee of the PLA, working under the Central Military Commission. The results today are there for all to see. China has emerged as a major arms exporter too. Money spent on R&D and Design Bureaus never gets wasted if there is constant pressure on them from the Users and the Political leadership to perform and deliver results. In-house R&D will also help the Army to understand the constraints of our national capabilities, and help the planning process to be realistic. It will better spread technical awareness in the Army.

To import our Defence needs even after decades of gaining Independence is a ‘Sin’, India being a major nation. It just shows that we have not got our ‘Act’ correct! If the right steps are taken at the soonest we can hope for the day five years from now, when the Indian Army will become the most formidable Land Power in Asia. Self-help is always the best form of help and we must stop wallowing in desperation and self-pity, thinking that nothing is going to change for the better in India. The DRDO needs the catalyst of competition to spur it to perform better, or resign itself to obscurity and irrelevance if it cannot sell what it makes.