Make most of Japan’s overtures 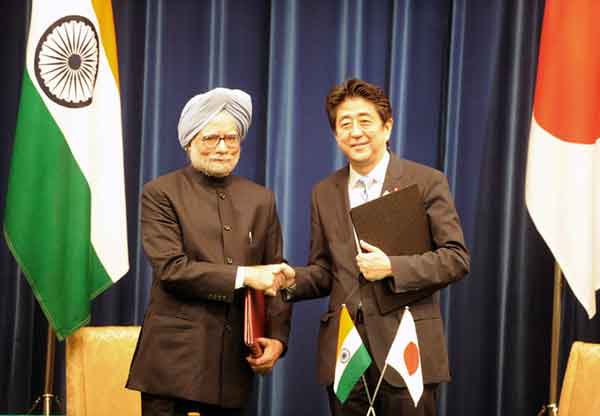 Prime Minister Manmohan Singh’s visit to Japan from May 27 to 30 was opportune as the circumstances today are more propitious than ever for India and Japan to forge a solid strategic partnership.

To deal with the emerging Chinese threat, Japan has to develop a new mix of diplomatic and military tools. …Japan’s ties with India have thus become more relevant strategically.

Japan’s ties with China have frayed badly, with massive trade and investment ties between the two failing to shield Japan politically from aggressive Chinese territorial claims on Senkaku islands. Even if the two countries manage to defuse the situation to avert the incalculable risks of an actual military brawl, China has lit a fire under the relationship that would be very difficult to douse.

To deal with the emerging Chinese threat, Japan has to develop a new mix of diplomatic and military tools. In addition to a defense cordon provided by its US alliance, it needs a diplomatic cordon comprising of select countries anxious about the unpredictable consequences of China’s rise visible in its aggressive posturing in the South China and East China waters and its recent incursion into Ladakh. Japan’s ties with India have thus become more relevant strategically.

Economic reasons too favour close India-Japan bonds. Japan is already heavily over-invested in China; China’s politically motivated squeeze of Japan on rare-earth supplies carried a lesson. Rising India, with all its shortcomings, has the market, consumption potential, investment needs and manpower assets of interest to an ageing Japanese society and the Abeconomics-pushed revival of Japan’s economy.

Prime Minister Abe lays stress on democracy as a source of security and has proposed in that perspective the concept of an Asian Security Diamond comprising of US, Japan, India and Australia. Tactically, grouping select countries sharing similar poitical values to work together to promote regional security is a defensible approach, and China’s protests, as an opaque, authoritarian state have no legs.

Japan’s current political overtures towards India are unprecedented. Sensing this, the Chinese have tried to interfere with the developing momentum of Indo-Japanese partnership, with Premier Li Keqiang inserting his visit to India before that of our Prime Minister’s Japan travel, and manipulating its results in rhetoric and substance to suit China’s diplomatic strategy.

Japan is keen to sell its amphibian aircraft US-2 to India, which interests the Indian Navy.

We went along with Li Keqiang to describe the India-China relationship as “an effective model of friendly co-existence between…neighbouring countries” and emphasized its “regional, global and strategic significance”. We agreed to establish a Joint Study Group to develop a BCIM (Bangladesh, China, India, Myanmar) Economic Corridor. Enhanced bilateral cooperation on maritime security and cooperation in safeguarding sea-lanes and freedom of navigation was also endorsed, as well as the establishment of an open and inclusive security framework in the Asia-Pacific region. We even approved  bilateral cooperation in civil nuclear energy.

In effect, by unduly projecting congruences with China, we distanced ourselves from key aspects of Japan’s China concerns in advance of Shri Manmohan Singh’s visit to Japan. As we pragmatically separate our relations with China from those with Japan, we should avoid creating space for China to shoot at Japan from our shoulders, as Chinese commentators have done in lecturing Japanese politicians- described as “petty burglars”- on the edifying manner in which India and China managed to properly solve their border stand-off quickly.

Prime Minister’s visit highlighted several positive features of the India-Japan political, economic and security agenda in the years ahead. He was shown unusual regard, with the Japanese royal couple hosting a lunch for him and  his wife and their visit to India getting announced for November/December this year. The two countries intend strenghtening their Strategic and Global Partnership “taking into account changes in the strategic environment”. In addition to existing multifarious dialogues at the level of their Foreign and Defence Ministries, India and Japan have also launched a Maritime Affairs Dialogue in January this year.

Importantly, India and Japan intend expanding defence ties, with regular and more frequent bilateral naval exercises planned following the first one in June 2012. In this connection we should be less reticent about trilateral India-Japan-US naval exercises in the Indian Ocean. Japan is keen to sell its amphibian aircraft US-2 to India, which interests the Indian Navy. A Working Group will explore the modalities of its acquisition.

In the context of Japan’s highly inhibited posture on external defence cooperation, such overtures need an encouraging Indian response to solidify other aspects of our bilateral ties.

On South and East China Sea wrangles, we joined Japan in reiterating our commitment to the freedom of navigation and unimpeded commerce based on international law. On terrorism, the Japanese endorsed our preferred formulations. On the sensitive nuclear cooperation issue, the gain from the visit was Prime Minister Abe’s recognition of India’s sound non-proliferation record, Japan’s commitment to work for India’s membership of the four international export control regimes- the NSG, MTCR, the Australia Group and the Wassenaar Arrangement, and proposed acceleration of negotiations on the India-Japan civil nuclear agreement.

The visit provided an opportunity to emphasize the need to boost the current bilateral trade of $18 billion. India accounts for only 4% of Japan’s investment in Asia, though it has committed $4.5 billion for key Delhi-Mumbai industrial and rail freight corridors as part of developing our infrastructure, is eyeing the Mumbai-Ahmedabad high speed railway route, and could potentially participate in the Chennai-Bengaluru industrial corridor. India is seeking Japanese investments in solar power generation and clean coal technologies.

Prime Minister rightly called India and Japan natural and indispensable partners for mutual prosperity and a peaceful and stable future for the Asia-Pacific and Indian Ocean regions. Beyond words, we need clarity about our strategic choices in action. The China factor should not interfere with the strategic direction of our Japan relationship.

One thought on “Make most of Japan’s overtures”