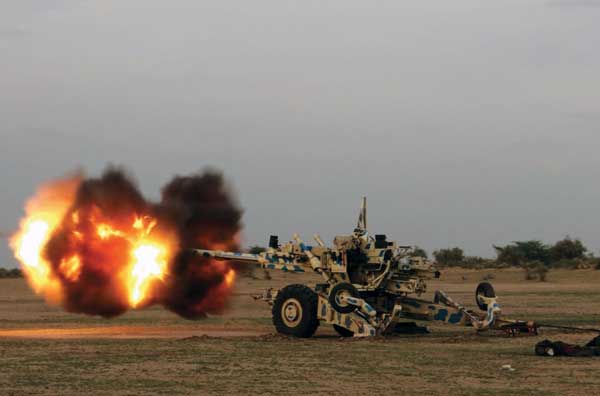 In 2019, India was among the top five countries with the highest military spending. Large armies with high technological base are usually self-dependent with a robust military industrial complex. On the contrary, India has the second-largest standing army in the world and is the largest arms importer. For a country as large as India with vast land frontiers and hostile neighbours, its defence cannot be guaranteed by 75 percent of weapon imports, including critical technologies. The only answer to our strategic needs is self-reliance in matters of defence; the ultimate objective being ‘Made in India’ and to begin with, ‘Make in India’.

President of India Ram Nath Kovind, while addressing a joint sitting of both Houses of Parliament marking the start of the Budget Session 2022, highlighted steps taken in making India self-reliant in the defence sector. His speech underscores India’s focus and quest for a robust military-industrial complex in achieving the status of ‘Atmanirbhar Bharat’ (self-reliant India). Outlining the steps taken by the Centre in the defence sector, President Ram Nath Kovind said that 87 percent approvals accorded for modernisation of the armed forces in 2020-2021 were from ‘Make in India’ category. “In 2020-2021, preference was accorded to ‘Make in India’ category in 98 percent of equipment related contracts. Our Armed Forces have also issued a list of 209 items of military equipment that will not be purchased from abroad,” the President said. He also added that a list of more than 2,800 items of defence equipment has also been issued by defence undertakings which will be manufactured domestically.

“A contract has been signed with Hindustan Aeronautics Limited to manufacture 83 Light Combat Aircraft (LCA) Tejas Mk 1A fighter aircraft. The government has also taken important steps for reorganisation of Ordnance Factories into seven Defence Public Sector Undertakings (DPSUs). Besides, the government is also committed to rapidly promote the private sector and start-ups in the defence sector,” the President said adding that the country is becoming increasingly self-reliant in the defence sector especially in defence production. He said that the government is working with utmost determination to ensure a safe and secure India. The ‘Make in India’ initiative was launched by Prime Minister Modi in September 2014, as part of a wider set of nation-building initiatives. Devised to transform India into a global design and manufacturing hub, ‘Make in India’ was a timely response to a critical situation.

By 2013, the much-hyped emerging markets bubble had burst and India’s growth rate had fallen to its lowest level in a decade. The promise of the BRICS Nations, Brazil, Russia, India, China and South Africa had faded and India was tagged as one of the so-called ‘Fragile Five’. Global investors debated whether the world’s largest democracy was a risk or an opportunity. India’s 1.2 billion citizens questioned whether India was too big to succeed or too big to fail. India was on the brink of severe economic failure, desperately in need of a big push. In a short space of time, the obsolete and obstructive frameworks of the past have been dismantled and replaced with a transparent and user-friendly system. This is helping drive investment, fostering innovation, developing skills, protecting Intellectual Property (IP) and building best-in-class manufacturing infrastructure.

The most striking indicator of progress is the unprecedented opening of key sectors including railways, defence, insurance and medical devices, to substantially higher levels of Foreign Direct Investment. It has been over seven years since September 2014. How much progress India has made in its mission “Make in India”, especially in the defence sector needs to be reviewed. Indigenisation is all about achieving self-reliance in defence manufacturing and this is one of the key objectives of India’s Defence Production. For this purpose, the focus of the Ministry of Defence has been on reducing dependency on imports and indigenisation of the items presently being imported. Towards this, OFB, DPSUs and Service Head Quarters (SHQs) have identified the items which, at present, are being imported and are intended to be indigenised through Indian vendors.

India’s Department of Defence Production is working towards this goal ever since the year 2014, with the following mission and vision:–

Vision – Department of Defence Production has the objective of developing a comprehensive production infrastructure to produce the weapons, systems, platforms, equipment required for defence.

As per the Union Budget for the financial year (FY) 2021-2022, the total allocation for Defence was around $49.6 billion. Around 68 percent of the capital budget is reserved for private sector, a jump of ten percent from FY 2020-2021. Private industry will take up R&D of defence products, 25 percent of total R&D budget allocated for start-ups and private domestic industry; this lays the foundation for the final goal towards ‘Made in India’.

India’s defence and aerospace manufacturing market is worth `85,000 crore. In 2022, it will increase to rupees one lakh crore. The Government of India (GOI) aims for the defence and aerospace manufacturing market in India to be rupees five lakh crore by 2047. The present contribution of private companies is rupees 18,000 crore in the market of rupees 85,000 crore. To build a competitive military industrial complex, the government of India has brought in major policy changes.

Enhancing the role of MSMEs in the defence sector, over 40 percent of the Project Sanction Orders has been issued to MSMEs…

Self-reliance and indigenisation in defence is important for both strategic and economic reasons and has, therefore, been an important guiding principle for the government. The government considers that the industrial and technological development in the sector have made it possible to achieve this objective by harnessing the potential of the Indian industry along with the technological capabilities developed by academic and research institutions. Though India has made rapid strides in defence technology and industrial base in recent past, it is yet to cover significant ground in terms of new products development and scale of production. The domestic defence industry would have limited scope for investment in R&D and production if it relies only on the domestic demand.

There is a need to promote investment in the defence sector, both in R&D and production, thereby resulting in higher self-reliance and indigenisation. While putting in place the policy framework and procedural mechanisms, the thrust would be on indigenous production and exploring possibilities of exports to other nations that may look forward to supplies from India. Since the defence technology needs long term investment, its obsolescence is high with low economies of scale. Hence, the policy of maximising indigenous production without well supported R&D policy and export strategy may not bring the desired results. Therefore, the defence industrial policy has to be supplemented by the strategy for defence exports without which the economic base of the defence industry would be difficult to sustain in the present competitive environment in the economy.

The government has already announced a Defence Production Policy in 2011, with an objective of achieving substantive self-reliance in design, development and production of equipment/weapons systems/platforms required for defence in as early a time frame as possible; to create conditions conducive for the private industry to take an active role in this endeavour; to enhance potential of SMEs in indigenisation to broaden the defence R&D base of the country. While the Defence Production Policy lays due emphasis on indigenous production of defence equipment with a greater role of private sector, SMEs and R&D institutions, the objective of Defence Production Policy will not be achievable without having a well-thought out export strategy, so that the industry is assured of access to export markets in addition to domestic market for investing in the sector.

In a push towards ‘Make in India’, the Defence Acquisition Council headed by Raksha Mantri approved proposals worth `7,965 crore for the modernisation of the Indian Armed Forces under ‘Make in India’. Proposal includes twelve Light Utility Helicopters from HAL; Lynx U2 Fire Control System from BEL and Mid Life Upgradation of the Dornier Aircraft from HAL. 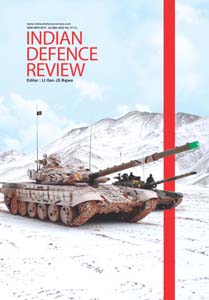 MSMEs are playing a major role towards achieving Indianisation. The recently-held Drone display after the band display during the Beating the Retreat ceremony is a shining example of the potential MSMEs can have. The ten-minute show, involved around 1,000 drones fabricated through indigenous technology, in the backdrop of synchronised music was a show stopper. This show is a ‘Make in India” initiative by a start up ‘Botlab Dynamics’, supported by Indian Institute of Technology (IIT) Delhi and Department of Science & Technology. Though India is a relatively new entrant into this field, compared to Western powers, it appears set to make rapid progress in developing indigenous drone capabilities.

Tapping this potential, the Defence Ministry has recognised the scope of our MSMEs. Enhancing the role of MSMEs in the defence sector, over 40 percent of the Project Sanction Orders has been issued to MSMEs. And projects amounting to over `1,000 crore are reserved for MSMEs. On the other hand, defence exports provide vast opportunities to India’s indigenous defence industry. This will provide sustainability and boost research and development in our private sector. India’s defence exports have increased from `1,521 crore in 2016-2017 to `8,434.84 crore in 2020-2021. The figure stood at `10,745 crore in 2018-2019. The government has set an ambitious target to achieve exports of about `35,000 crore ($5 billion) in aerospace and defence goods and services by 2025.

Defence Budget 2022 has laid the foundation towards achieving this goal. A total of 68 percent of the capital procurement budget will be earmarked for domestic industries for 2022-2023. This is a marked jump of ten percent from the previous year’s 58 percent allocation. It sets aside 25 percent of its budget in defence Research and Development (R&D) for collaborating with private industry.

The Finance Minister has announced that five percent of Universal Service Obligation (USO) fund would be provided for R&D and technology upgradation. A new “independent umbrella body” will be set up for private players to test new technology and certification. Private industry will be encouraged to take up the design and development of military platforms and equipment in collaboration with DRDO and other organisation through Strategic Partnership model. This foundation is likely to enhance India’s paces towards self-reliance through ‘Make in India’.