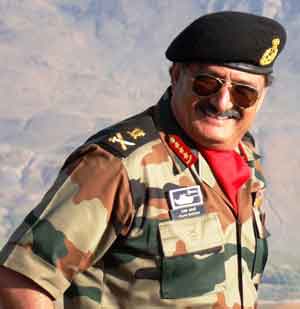 Lieutenant General Rajan Bakhshi has had extensive operational experience in varied appointments in all kinds of terrain configurations. He has served in all the Strike Corps’ of the Indian Army.  The General Officer commanded an Armoured Regiment and an Armoured Brigade as part of an elite Armoured Division on the Western Front.   He went on to command an Infantry Division in the Western Theatre and a Corps in High Altitude Area which includes the highest battlefield in the world.

While on staff, the General Officer has had the experience of serving as    a Logistics Staff Officer of a Mountain Brigade deployed in High Altitude Area, Brigade Major of an Armoured Brigade and Colonel General Staff of an elite Armoured Division during OP PARAKARAM.  He has also held Senior Staff Appointments at the Integrated Headquarters, Ministry of Defence (Army), besides serving on instructional assignments at the National Defence Academy Khadakwasla and the Defence Services Staff College, Wellington.