Look beyond FDI: Laying the Right Foundation for Defence Manufacturing

Ranked fourth, India has a strong talent pool in science, technology and research, as well as some of the lowest labour rates in the world. Its concerns include the country’s regulatory environment, high interest rates, and healthcare system, as well as under-developed physical infrastructure. The country has a goal of moving its manufacturing share from 16 per cent of GDP to 25 per cent by 2022. Now the same is propelled by an aggressive policy for ‘Make In India’. The future outlook seems bright provided India can seize the opportunity.

What is the foreign ownership with which we can get the trinity of technology, capital and manufacturing? Can we kill all three birds at the same time to make India a Defence Manufacturing hub? With time, the context changes forcing change in strategy. In the past, India banked on the Licensed Production route. We kept building the same thing that we got from abroad. We failed to build the next upgrades on our own. We failed to migrate to the higher part of the value chain. We have been changing our recommendations on Foreign Direct Investment (FDI) from 26 to 49 per cent, from 51 per cent to 74 per cent and so on, without having achieved the desired results. Thus, we have to revisit our conclusion and determine whether an incorrect diagnosis has been made.

FDI has changed the consumer goods industry in many countries, including China. But, when we talk about defence beyond the boundaries of the parent nation, there is concrete evidence to substantiate that. Which country does not want its jobs not to be protected? When it creates place for FDI, it loses on the count of job creation in the parent country. The sacrifices done to overcome some of the structural market barriers, maybe Entry Barriers or it may be to reap the best benefit of factor inputs in the destination nation so that the parent nation earns more bottom line. We have to find cogent and coherent reasons why India still struggles to make its military industrial complex self-reliant and sustainable.

Correlation between FDI and Technology Independence

“The Biggest Arms Importer Is India – No More”. As per the IHS Global Defence Trade Report 2014, Saudi Arabia replaced India as the largest importer of defence equipment worldwide and took the top spot as the number one trading partner for the US. Saudi Arabia surpassed India to become the largest defence market for the US that supplied one-third of all exports and was the main beneficiary of growth. Saudi Arabia and UAE imported more weapons than all of Western Europe.

Saudi Arabia, Indonesia, Sweden and Nigeria are the UK’s top trading partners. One out of every seven dollars spent on defence imports will be spent by Saudi Arabia (IHS, 2015). The selling proposition for ‘Make in India’ for defence for high amounts of acquisition may not be valid. The same may not hold good after five to ten years. Thus, it is time to set things right, as building of national capabilities cannot be left to assumption of higher FDI and consequent development of indigenous capabilities through technology.

Overwhelming evidence is available that FDI does not necessarily and automatically lead to transfer of advanced technologies. A study by academicians from the University of Oxford concluded that entry of FDI indeed leads to spillover of technologies to the local economy but that such spillovers are not automatic. This beneficial impact of FDI, however, is limited to ancillary activities. Specific policies are required for such beneficial effect to happen. A study by the United Nations concludes that most Transfers of Technology from MNCs occur within higher-income developing countries.

A nation can take its procurement decision but the FDI decision remains with the MNC. Whether FDI brings technology or not depends partly on the State Control on exports of such technology. Ultimately what matters, is how competitive and attractive is the domestic sector in the domain of technology. Greater the capability, higher is the possibility to absorb advanced technology.

Ease of Doing Business in India

The World Bank has come out with “Doing Business 2015” data for India out of 189 economies. Since there are no specific studies on defence manufacturing, the same will serve us a benchmark. No nation in the world, which is weak in manufacturing, has emerged as a strong player in military armaments. The only improvement in 2015, over 2014 Rank is in the protecting minority investors. Thus, the policy changes due to ‘Make in India’ Campaign will take some time before making an impact on ground realities.

The comparative data of 2015 vis-a-vis 2014 for ease of doing business looks like this:

It is important to know their national strategy that makes them lead players in manufacturing. In spite of its economic slowdown, China continues to maintain its rank as the most competitive manufacturing nation. Reasons cited are the advantages of its labour and materials cost, strong government spending in manufacturing and innovation and an established supplier network.

Ranking highest in talent-driven innovation, Germany continues to make impressive gains since 2010. There is a renewed focus on manufacturing, and manufacturing exports nearly tripled between 2000 and 2011. The country is focusing on new technologies and a highly skilled workforce. It is dominating the field of “mechatronics”, a multi-disciplinary field of science and engineering merging mechanics, electronics, control theory and computer science.

Ranking third, USA’s strength lies in its appeal as a manufacturing destination, core competency for talent-driven innovation, physical infrastructure, established supplier network and a strong legal and regulatory system. An overall sense of uncertainty that plagues the US regulatory system is seen as a significant disadvantage.

Ranked fifth, South Korea’s strength based on its competitive cost structure and quality products. Its favourable industrial policies and highly educated and skilled workforce are definite advantages. Its complex policy and regulatory environment is viewed as a negative point.

Ranked fourth, India has a strong talent pool in science, technology and research, as well as some of the lowest labour rates in the world. Its concerns include the country’s regulatory environment, high interest rates, and healthcare system, as well as under-developed physical infrastructure. The country has a goal of moving its manufacturing share from 16 per cent of GDP to 25 per cent by 2022. Now the same is propelled by an aggressive policy for ‘Make In India’. The future outlook seems bright provided India can seize the opportunity.

The report found that access to talented workers is the top indicator of a country’s competitiveness – followed by a country’s trade, financial and tax system, and then the cost of labour and materials. Enhancing and growing an effective talent base remains core to competitiveness among the traditional manufacturing leaders – and increasingly among emerging market challengers as well. How good is India in these respects? How are the factors of production faring well for India?

The table given below compares India’s performance in Productivity – Wage Relation with that of the USA, the world economic leader with the highest levels of labour productivity. For this purpose, the national output has been measured in terms of market values after adjusting for variations in Purchasing Power Parity (PPP).

Labour productivity levels in India and USA in 2000 (US $)

India’s labour productivity is distressingly low, the GDP per person employed being as low as 1.39 per cent/7.90 per cent (Actual/PPP) of that in USA. GDP per person hour employed is at 2.46 per cent/14.00 per cent (PPP adjusted) as compared to the USA. Although data may be outdated, not much has changed in the Indian landscape. High pay and low productivity makes Indian Public Sector employees one of the highest paid employees in the world. A recent study is quoted by Deloitte which bring out productivity in 2013.

The graph shows that India’s labour cost although less (India, 0.9, China 2.8, USA 35.4, Germany 46.4), productivity at 8.9 (USA 68.2, Singapore 45.2, Germany 43.3, China 14.2, Brazil 13.7) is the lowest among comparative countries. Thus, low labour cost means little without productivity. The labour issue gets complicated with Unionism in the organised sector. In recent past, at Hyundai Motors India, subsidiary of the South Korean automaker, workers went on an 18-day strike to demand recognition of the employees’ union. The company has debated moving the Tamil Nadu-based plant to Europe (Most of the production is for export). 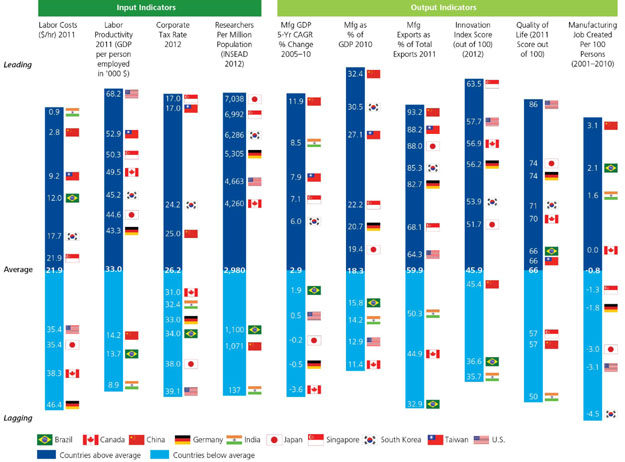 At tyre maker MRF, the Arakkonam (Tamil Nadu) unit was closed almost a month due to rival unions clamouring for recognition in October 2010. Workers at auto factories attacked supervisors and started a fire that killed a company official and injured 100 managers including two Japanese expatriates. The violent mob also injured nine policemen. The company’s General Manager of Human Resources had both his arms and legs broken by his attackers, unable to leave the building that was set ablaze, and was charred to death. Operation was at less than ten per cent of its capacity at a loss of rupees one billion a day.