Long Range Drone for US Navy

The US Navy is testing a long-range drone that flies at 70,000 feet above aircraft carriers and allows fleet commanders to track suspicious vessels across vast expanses of the sea. A prototype of the unnamed drone, referred to as the Broad Area Maritime Surveillance (BAMS) system, has been deployed with the Navy’s 5th Fleet and could help keep tabs on any Iranian threats to shipping in the Persian Gulf. 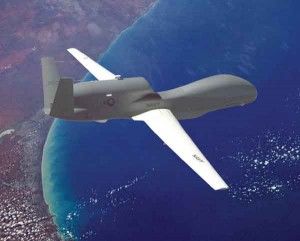 The drone flies a 24-hour long mission every three days and is providing more than half of 5th Fleet’s aerial intelligence, surveillance and reconnaissance information. The Navy could use the BAMS Demonstrator, an RQ-4 Global Hawk equipped with modified Air Force radar, a high resolution camera and infra-red sensors, to track hundreds of suspicious vessels in the Gulf.

The first BAMS aircraft off the production line will make a maiden flight in June, with a target date on entering the service in 2015, according to its manufacturer, Northrop Grumman. The drone, in combination with new manned P-8A Poseidon jets, will replace the Navy’s ageing fleet of 250 P-3 Orion surveillance aircraft, representing a sea change in the service.