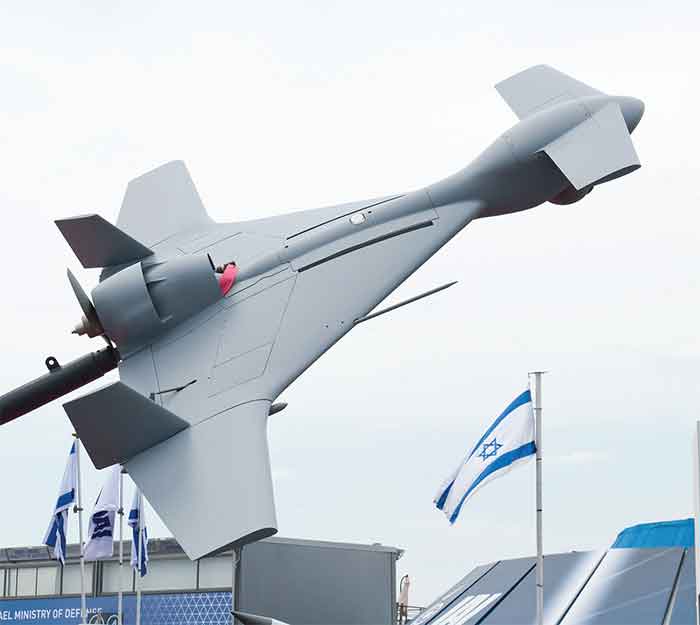 Loitering munitions can provide a breakthrough against enemies well protected by their surroundings, like built up areas, as also top attacking tanks and armoured vehicles. These munitions are considered a mix of cruise missiles and drones. Loitering munitions can be launched by small body of infantry, giving them their own precision guided indirect firepower.

Equipped with a camera, the mini-drone once launched can ‘loiter’ in the air relaying imagery to troops on ground. When the troops see a promising target, they can order the drone to dive onto the target and detonate its warhead. Warhead of loitering munitions are small, having explosive power like a grenade but they are technical solution to an age-old problem for hitting enemy on the other side of a hill  shielded from observation or fire by terrain, like mortars in defiladed positions, or  fly into windows to take out enemy positions during urban combat. Some types of loitering munitions can even return to the base for future deployment.

Israel led the world in terms of loitering munitions with its ‘Harpy’ produced by Israel Aerospace Industries in the 1990s. Harpy attacks and destroys enemy radar emitters, hitting them with high hit accuracy is designed to attack radar systems and is optimized for suppression of enemy air defence (SEAD) role. Carrying a high explosive warhead it has a maximum speed of 185 km/h and a range of 500 km.

Israel sold Harpy to many foreign countries including, South Korea, Turkey, India and China. Having bought $55 million worth Harpy loitering munitions from Israel in 1994, China wanted upgrades of these by Israel in 2004. However, upgrades were not done when objected by the US for restricting arms transfer and sales of advanced military technology to China.

Subsequently, IAI developed ‘Harop’ – advanced version of Harpy. This was displayed at the Paris Air Show in 2013. Harop is an anti-radiation drone that can autonomously home in on radio emissions. Instead of having a separate high-explosive warhead, the drone itself is the main munition, designed to loiter the battlefield and attack targets by self-destructing into them.

With small radar-signature it can evade SAMs and radar detection systems which are designed to target bigger aircraft or to intercept fixed-trajectory missiles. Harop has loiter time of six hours and a range of 1000 km both ways. It can either operate fully autonomously or in the human-in-loop mode. If a target is not engaged, the drone returns and lands itself back at base.

Latest from IAI is mini version of Harop – one-fifth the size with a 3–4 kg warhead shorter endurance of 2–3 hours to take on time-critical targets or ones that hide and re-appear.

In 2016, US Companies were looking to market the Hero-30 loitering munitions to the US military. Hero-30 is a man-portable unmanned aerial vehicle (UAV) or drone designed for about 30 minutes loiter with a 0.5kg warhead. Launched from a canister via air pressure and powered by an electrical engine in flight, it can transmit a video-feed and strike the target like a missile. The low explosive yield mitigates the chances of collateral damage.

The US already had the ‘Switchblade’ loitering munitions but with loiter time of 15 minutes. Developed by AeroVironment, Switchblade is a 2.4 kg munition that fits in an infantryman’s backpack. It has a range of up to 10 km, a speed 100-160 km/h. It is guided by day and night video cameras on the weapon, and is GPS fitted. It was used experimentally in Iraq and Afghanistan. A six-tube launcher for Switchblade is also being developed.

Russia`s ZALA Aero unveiled a new loitering munition called ‘Lancet’ at Army-2019. Lancet comprises reconnaissance, communications, navigation, and strike components. Compared to the KYB-UAV drone previously developed by ZALA Aero and unveiled at IDEX 2019, the new munition features a heavier payload. Lancet is fitted with a TV guidance unit that allows the operator to control the munition even on the terminal stage of flight. It features an optical-electronic guidance unit and can be pre-programmed before the flight.

With a maximum take-off weight of up to 12 kg and a combat range of 40 km, Lancet is powered by an electrically-driven push engine with a small-size rotor. The Lancets in combat configuration could be fitted with high-explosive (HE) or HE-fragmentation warheads.

In the Category of loitering munitions, China’s PLA have the indigenous CH-901 and WS-43 loitering munitions. The CH-901 is 1.2m long drone weighing 9 kg. It has a top speed of 150 km/h, an operation radius of 15 km and an endurance of 120 minutes.

The WS-43 has a range of 60 km, carries a warhead of 20 kg and can loiter over the target area for 30 minutes. The WS-43 can also be launched from a rocket launcher. The current news is that China’s PLA has invited tenders to procure two different types of loitering munitions, as seen from the PLA’s website on March 9, 2020.

The details and number of such systems to be procured have not been disclosed, amongst the announcement that  also seeks tenders for several other items – including two types of fuel air explosive (FAE) and two types of terminal-phase, laser-guided munitions. This information is listed as ‘confidential’.

On March 6, 2020, the Indian Army issued a Request for Information (RFI) for procuring 100 x loitering munitions systems, which will be deployed with the infantry using man-portable platforms. The Army is looking at September 2020 as the target for issuing the tender and the required quantity to be delivered within 18 months of the contract.

The operational and broad parameters set out in the RFI include: man portable platform with sensors integrated with munitions for surveillance by day and night and also pinpoint strikes; light weight, easy to carry and operate; flight endurance of at least 30 minutes and a range of not less than 15 km (LOS); controlled by ground controller through data link; warhead to destroy personnel and soft skinned targets; all weather capability across the spectrum of conflict in Indian terrain and climatic conditions; overall weight not more than 20 kg and operable by 1-2 persons; operate up to 4500m above mean sea level (AMSL) and not less than 300m above ground level (AGL); should have anti jamming and anti spoofing properties; maps should include Raster, Digital terrain elevation data, GIS ready maps in SHAPE file format and GIS geo references should be displayed in latitude-longitude or Indian Military Grid Reference (IMGR); should fulfill relevant EMI/EMC requirements as per military standards, and; capable of being air dropped, placed on a platform system and flexible enough to slither down man-packed from helicopters.

Launching loitering munitions in advance implies the defender will find it very difficult to locate where the munition was launched from. Loitering capability gives advantage to the attacker in reducing the launch and travel time, plus the advantage of surprise.

Given the rapid advancements in technology and the fact that loitering munition systems are cheaper than the armed reconnaissance drone, more countries should be expected to produce and use loitering munitions, which could become a common sight on the modern battlefield. Naturally the Original Equipment Manufacturers (OEMs) will market these to other countries.

Concurrently, the use of hard-kill protection suites and radio jamming as part of electronic warfare technology would also become very common. But going by the old adage of mine versus anti-mine, solutions would eventually be found to counter loitering munitions – same way as the existing invincibility of hypersonic platforms will eventually find a counter some day in future.

Hopefully the India Army gets these 100 x loitering munitions systems in the visualized time frame to boost its combat potential although all procurements have been put on hold with downturn in economy because of COVID-19. The Make in India option for loitering munitions needs to be looked at seriously.