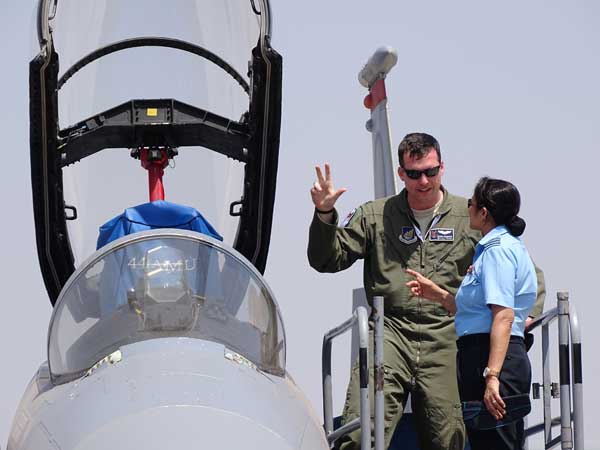 Finance Minister Arun Jaitley while presenting his maiden budget on 28 Feb, 2015 underlined that defence of every square inch of our mother land comes before anything else.

…push towards ‘Make in India’ initiative will curtail over-dependence on imports.

He announced an increase in the defence budget by 10.95 percent to Rs 2.46 lakh crore for the next fiscal as compared to the revised estimates of Rs 2.22 lakh crore for 2014-15.

He elaborated that the push towards ‘Make in India’ initiative will curtail over-dependence on imports. Arun Jaitely said, “So far, we have been over dependent on imports, with its attendant unwelcome spin-offs,” adding that government has already permitted FDI in defence. He said this was done so that the Indian-controlled entities also become manufacturers of defence equipment, not “only for us, but for export”.

The distribution under Revenue and Capital Heads:

The defence budget of India has more than doubled over the past decade from Rs 80,500 crore to Rs 2,46,727 crore for the financial year 2015-16 making India the world’s largest arms importer. Though this budget in terms of the GDP percentage is far less when compared with that of our adversaries, China and Pakistan. While the Indian defence budget was 1.8 percent of its GDP, the Chinese and the Pakistani defence budgets were well over 2.3 percent of their GDP.

This defence budget falls critically short in the overall endeavour of capacity building of our armed forces to cater for envisioned threat perception.

Despite a steady growth in allocation of defence budget over the past decade, the deficiency of weapons and equipment in the three services is alarmingly high. This is especially so when it has been identified that India has to be prepared for a war on two and a half front. A combined threat posed by Pakistan and China along with the internal security challenges warrants defence preparedness of a very high degree. Major indicative requirements out of the long wish list are as mentioned below:

This defence budget falls critically short in the overall endeavour of capacity building of our armed forces to cater for envisioned threat perception.

Comparative allocation in the defence budget 2015 – 16 is as below: 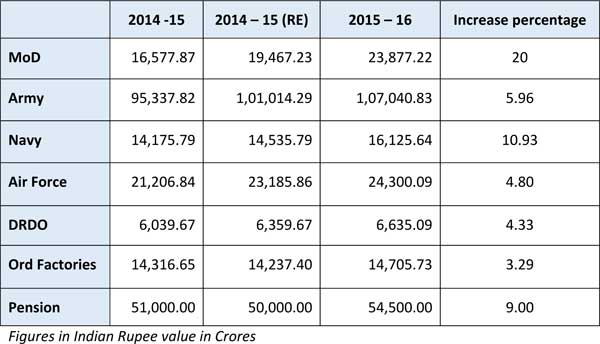 After years of neglect, India is trying to build its armed forces based on capabilities thus narrowing the military gap with China. Just like the previous year, Indian Navy’s budget has increased by almost 11 percent. It assumes importance as the Chinese have been building up their fleet of ships and submarines making forays in the Indian Ocean.

The limited rise in the military budget indicates that the shopping list of  126 fighter aircraft from Dassault, 197 light helicopters, 145 Ultra-light Howitzers, 15 Apache attack helicopters and 22 CH-47F Chinook medium lift helicopters is unlikely to materialise soon. Since three-fourth of the total allotted budget is spent on maintaining the world’s third largest standing force. This clearly implies that only a few new weapons will be ordered this year.