Lieutenant did you die in vain? 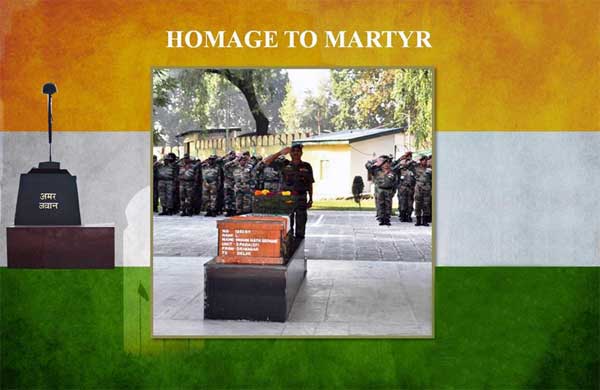 I learnt about your demise from the ticker tape on one of the news channels, last evening. It was a big encounter and a very fierce one at that. A feeling of deep saddness enveloped me as I reflected on your youth which had been sacrificed in Gurez Sector, in the line of duty. What does your death mean?

Your name will not be read out in any obituary reference in Parliament, as is done in the UK for all soldiers who fall in combat in the line of duty.

By now your mortal body would be lying embalmed at the Base Hospital and will be flown out of Srinagar later in the day, on its final journey to the cremation ground in your native town or village.

You were too young to die, far too young! For whom and for what did you die then? This question haunted me last night and I will attempt to answer you.

You were probably from a village or a small town of India. You were perhaps the son of an army officer or JCO, or from an urban or rural civilian background. You could not be from one of the big cities where iron has entered the soul of our youth and where the only driving motivator is quest for money in the surreal environment of the corporate world.

Why did you join the army? Ofcourse to get a job. But then that is over simpliying the question. You were possibly motivated by the traditions in your family and clan, you were probably enthused by the sight of your elder brothers, uncles or other men from your community in uniform, you were perhaps enchanted by the cantonment life where you may have spent your growing years.

As your body comes home, you will not get the adulations from the Government which a soldier’s body gets in the USA. Your name will not be read out in any obituary reference in Parliament, as is done in the UK for all soldiers who fall in combat in the line of duty. Your name will not be etched on any national memorial because we do not have one! Symbolically you will become the unknown soldier for the Nation, for whom the flame burns at India Gate, but your name will not be etched there. The names engraved on that monument are of the soldiers who died fighting for the British Indian Army and not those who have made the supreme sacrifice for independent India! Can it get more ironic?

But do not despair Lieutenant. Your comrades will do you proud! The senior most officer will lead the homage that your brother officers will pay you before you leave the Valley of Kashmir one last time. Your unit representatives will escort your body home. You will be carried to the funeral pier draped in the flag for which you died fighting. The darkened and tearful eyes of your grief-stricken mother and the stoic figure of your father, benumbed by the enormity of this tragedy, will move even the most cynical.

I do not know Lieutenant at what stage of the encounter you fell, mortally wounded. But the fact that you were there on the lonely vigil across the Line of Control in Gurez, is enough to vouch for your valour. Your unit and formation commanders will see to it that you get the gallantry award which you so richly deserve. In due time your father or your mother will be presented the medal and parchment of your gallantry, which will be framed and find the pride of place in your home. Time will dull the bitterness of this tragic parting, which right now is the only feeling that engulfs your parents and siblings, in its enormity.

Lieutenant you were lucky. You did not live long enough to get married and leave behind a grieving widow. You did not live long enough to have children. For when they would have come of age you would have seen in them a cynicism towards the army for which you died. You will not see a young son who thinks his father is a hero and wants to follow his footsteps in joining the army only to be harshly disuaded by his mother (or even father!) from following a profession which ranks so low for the youth of our country. You were lucky not to serve long enough to see the army getting belittled. You did not live long enough to see the utter indifference and even disdain for the army. Like you a large number of valiant soldiers laid down their lives on the rocky heights of Kargil, fighting against self-imposed odds. Today it is not even felt fit to publicly commemorate the anniversary of that stupendous military victory, won by blood and gore, in a befitting manner.

But do not despair Lieutenant. Your name will be etched for posterity in the annals of your Unit and your Regiment. A silver trophy with your name inscribed on it, will grace the centre table of the unit mess. You will also find your name in the unit Quarter Guard, where annual homage will also be paid to you. The war memorials at the Formation HQ where you served and at your Regimental Centre will proudly display your name for eternity. If you joined the Army through the NDA, your name will be written in the Hut of Remembrance through which each cadet will pass, paying homage before his Passing Out Parade.

Whenever your mother will think of you her eyes will mist over but there will be more stars in them than you ever wore on your shoulders.

There will be an obituary reference to you from your comrades in the papers, which will be flipped over by most but which will be read in detail by people who have a connect with those who wear or wore the uniform.

As your parents head into the evening of their life, memories of your valour will be their most precious possession. Whenever your mother will think of you her eyes will mist over but there will be more stars in them than you ever wore on your shoulders. Your father may speak quietly about you but no one will miss the swell of pride in his chest. For your siblings you will always remain the real hero, and for that matter even for your community and village. A school or a road may well be named after you and you will become a part of the local folk-lore.

You died Lieutenant, because when the test came, you decided that you could not let down your family, your clan and your comrades, who always expected you, without ever saying so, to do your duty. You, Lieutenant, have done more than your duty and made your memory their hallowed possession.

Lieutenant you did not die in vain!

Sarvar Bali, a graduate in Journalism Honours from LSR College

3 thoughts on “Lieutenant did you die in vain?”