Marking the African debut of the Leopard 2A4, Rheinmetall Defence of Germany took advantage of Africa Aerospace & Defence 2010 (AAD) in Cape Town to put the world’s finest main battle tank through its paces. Daily live presentations on a special test track proved to be a major draw, with the Leopard 2A4’s excellent mobility in rough terrain clearly impressing the crowd. 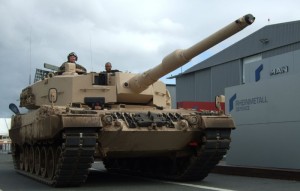 Rheinmetall has been developing and producing armoured vehicles for over forty years. The Leopard 2 continues to set the global standard for modern main battle tanks, with more than 3,600 in existence, now in service with 16 nations. Although Rheinmetall is not the main contractor for the Leopard 2 MBT, the company has nevertheless played an integral role in its development and production. Moreover, out of a total 2,125 Leopard 2A4 tanks produced, 977 were manufactured entirely by Rheinmetall in Kiel for the German and Dutch armed forces.

By supplying critical subsystems, Rheinmetall contributes decisively to the Leopard’s overall performance. For example, Rheinmetall is responsible for its 120mm smoothbore main armament, still the world’s finest tank gun. This cutting edge weapon is produced under licence in the United States for the M1 Abrams, and is also found in other MBTs.

The Leopard likewise benefits from Rheinmetall’s globally leading ammunition technology. Developing perfectly harmonized combinations of weapons and associated ammunition families is a longstanding core competence of the Rheinmetall Group, blending system integration expertise with unrivalled kinetics know-how. Developed and manufactured by Rheinmetall and based on the Leopard, the Büffel/Buffalo 3 armoured recovery vehicle forms an integral part of the Leopard 2 family of land systems. Likewise based on the Leopard 2 chassis, Rheinmetall’s highly versatile Kodiak armoured engineer vehicle underscores the Group’s competence and capabilities as a system builder.

In the field of C4I and fire control technology, Rheinmetall possesses a unique selling point. Adapted to the individual requirements of the user, it supplies customized solutions that can be integrated into existing higher-echelon command and control systems.

One thought on “Leopard 2 steals the show in South Africa”