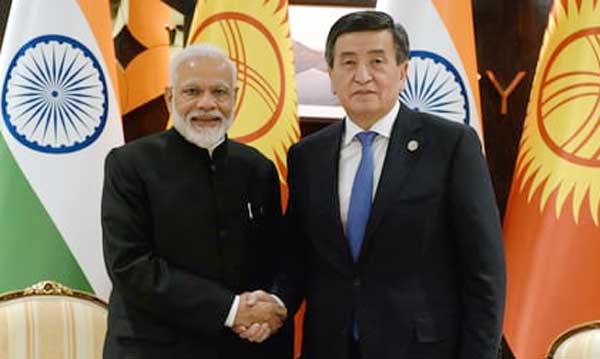 Excavations in Harappa provide proof of caravans from Central Asia to the Indus Basin. Globally sea trade emerged the cheaper option, but Central Asia was mostly land-locked, with only western side resting on the Caspian Sea. In modern times, the land route was disrupted because of ‘dog in the manger’ attitude of Pakistan. That is why emergence of the International North-South Transportation Corridor (INSTC) and India’s investments in Chabahar port of Iran, both linking India with Central Asia and beyond.

Prime Minister Narendra Modi visited all five CAR countries in 2015, first by any Indian PM. The First India-Central Asia Dialogue (foreign secretary level) with the participation of Afghanistan was held in Uzbekistan in January 2019. The dialogue aimed to intensify mutual engagement, taking up concrete projects, inter alia, under Lines of Credit and Buyers’ Credit, and by sharing expertise. India proposed a ‘India-Central Asia Development Group’ with representation from all participating countries in this G2G group; all requested to come up with concrete proposals.

India emphasized no business development, no investment is possible in a country suffering terrorism, therefore, the need to jointly fight the scourge of terrorism. India will host the next India-Central Asia Dialogue with the participation of Afghanistan in 2020.

Modi also proposed the template ‘HEALTH’ gor cooperation among SCO members; denoting H – healthcare, E – economic cooperation, A – alternative energy, L – literature, T – terrorism-free society, and H – humanitarian cooperation.  Reinforcing Modi’s views, the Bishkek Declaration issued on June 14 said terrorism and terrorist ideology were among the issued which required special attention because they were cross-border in nature. It condemned terrorism in all its forms and manifestations, stressing that acts of terrorism cannot be justified. It also said that that interfering in other countries’ domestic affairs under the pretext of fighting terrorism and extremism as well as using terrorists, extremists and radical groups to achieve one’s own mercenary ends is unacceptable.

Both Prime Minister Narendra Modi and President Sooronbay Jeenbekov appreciated the significant progress in cooperation between the two countries in various fields, since establishment of diplomatic relations in 1992, and the Joint Declaration on the Principles and Areas of Cooperation between the Kyrgyz Republic and the Republic of India of 18 March, 1992, which laid down a strong foundation for the development of bilateral relations between the two countries. Both agreed to raise bilateral relations to the level of Strategic Partnership.

Jeenbekov said the Kyrgyz-Indian Business Forum is a significant event in the development of trade and economic relations between Kyrgyzstan and India, adding, “We believe that the priority Kyrgyz-Indian business forum and textile exhibition are confident steps to develop cooperation between Kyrgyzstan and India”. Jeenbekov said India (like Kyrgyzstan) is focusing on horticulture, animal husbandry and creating favorable conditions for export of agricultural products. He proposed joint efforts to implement projects in the field of agriculture and expansion of cooperation in fields of mining and tourism.  Indian Prime Minister, in turn, added that the India will allocate $ 200 million loan for the implementation of joint projects.

India’s strategic partnerships with CARs including with the Kyrgyz Republic are important, mutually beneficial and for ushering in peace and prosperity for the region and the world. Thousands of Indian students have been studying medicine in CAR countries, according to one source some 10,000 in the Kyrgyz Republic alone.  India-Kyrgyz Republic commercial relations amounted to US$24.98 million in 2016-2017; India’s exports to Kyrgyzstan were US$22.66 million and Kyrgyz exports to India were US$2.32 million.

As part of the global ‘Great Game’, there appears to be a concerted effort to destabilize Central Asia, one indication being the concentration of Islamic State and affiliates on the Afghanistan-Tajikistan border.  The possibility of conflict in Iran would adversely affect the INSTC and Chabahar operations by India. Above all, Pakistan appears to be only making cosmetic efforts to clamp down of terrorism, its military-terrorists nexus having reached a point possibly of no return.

Notwithstanding, all this, India must continue strengthening its strategic partnerships with Central Asia. Since long, CAR have wanted a UN force on the Pakistan-Afghanistan border to check terrorism flowing out of Pakistan. While that will remain utopian, India-CAR cooperation, and for that matter global cooperation is vital to fight terror.

One thought on “Kyrgyzstan – and India’s Central Asia Connect”