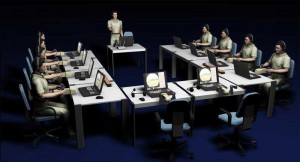 Like many armies worldwide, the Norwegian Armed Forces have explored the use of serious games to support their training activities. In the past, these applications largely failed to simulate realistic vulnerability and damage models, and also lacked the sophistication to reproduce the vehicles´ operational details.

BATSIM® Classroom is a milestone in military simulation

Driven by KMW´s unique knowledge – deriving from over 30 years of development into high-end combat simulation – and the quantum leap of commercial computer and graphic board development, KMW Training & Simulation has condensed its combat simulation software to fit and run on a single COTS Desktop PC. As a result, it will be available to an even larger number of trainees.

As Dr. Dirk Schmidt, Senior Vice President Training & Simulation for KMW, commented “This is a milestone in military simulation because with the BATSIM® Classroom a desktop simulation system is available which combines KMW´s expertise as a leading manufacturer of main battle tanks and of a proven simulation framework fielded in many armies worldwide. Our customers will appreciate the plug and play networking of our new BATSIM® Classroom with their existing high-end simulators”. The BATSIM® Classroom for LEOPARD 2 has been developed in close cooperation with experienced tank training experts to match their exact requirements.

The training environment is tailored for the MBT LEOPARD 2 with physical replication of important control elements and validated vehicle dynamics, vehicle logic and simulation of fire control system, but can easily be adapted to other combat vehicles, from all vendors.