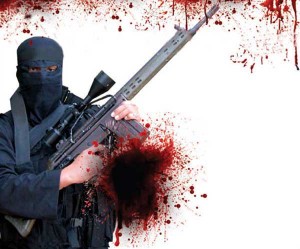 Terrorism, like almost every other human activity that involves production and creation of goods and services, needs money. Collecting funds initially through donations, borrowing or robbing banks and the rich are the first stage when terrorism/insurgency is internal. State sponsors are the starting point of all externally-originating terror activity and resort to extortion, kidnapping for ransom, smuggling and human trafficking inevitably follows.

Funds are needed to maintain cadres, arrange their training, weapons and shelter but, eventually, all terrorism becomes profitable business. The nexus that grows over time among terrorists and criminals make the two indistinguishable. Both begin to appear legitimate businessmen as they discuss real business in fancy bars in the US or Europe. The only ideology of the leadership of the organisations is that of money and profits. The economics of jihad is the global dimension to terror and crime.

Saudi and Qatari money, and donations from charities to anti-Assad groups like ISIS have helped create the present mayhem in West Asia.

Turbulence is the Normal

Terrorism and turbulence have existed in West Asia on a massive scale for several decades. The Black September attacks in Jordan, the Munich Massacres, the assassination of Anwar Sadat and the Yom Kippur War were early markers and the Opec oil embargo alarmed the west. The Siege of Mecca in 1979 is not as often remembered as the Iranian Revolution the same year, but this shook the Saudi royals and other Sunni potentates. West Asia was only going to get worse and a radical and violent Islamic world was taking shape. Hezbollah was born in 1985 and Hamas in 1987 at a time when the Afghan jihad against the Soviets raged and in which many Arabs participated. This was a great economic and financial opportunity for unconventional businessmen, middlemen and terrorists-turned-businessmen. Adnan Khashoggi, Manucher Ghorbanifar and Ghaith Pharaon were legends in their time.

It was the Reaganomics of terror where armed groups had given up relying on state largesse, and had begun to finance themselves using market and business techniques. In the 1980s, when the well-endowed Palestinian leader Ahmed Jibrilwas dumped by Muammar Gaddafi and the KGB, he wasted no time in switching loyalties to the Iranians for a fee. Hamas having received funding and support from Saudi Arabia became a state-shell with enough resources to provide socioeconomic support to Palestinians. The Arab Bank in Sidon, Lebanon, which had bailed out the debt-ridden King of Jordan more than once, was the bank of convenience of the Palestine Liberation Organisation (PLO) till the Israeli invasion in April 1982.

That year, the PLO controlled 35 factories in Lebanon with lucrative business interests abroad. Tax worth millions, collected by the PLO from all illegal activity in Lebanon, was shared with Arab luminaries. Anew entity came into prominence during this time. Backed by money from many influential Saudis like Khaled bin Mahfouz — whose sister was one of Osama bin Laden’s wives, Agha Hassan Abedi, a Pakistani — founded the Bank of Credit and Commerce International (BCCI) in 1972. The BCCI handled shady transactions of illegal arms transfers, handled drug money and became the CIA’s favoured bank during the Afghan jihad in the 1980s. The underworld of terror financing inevitably got linked with rogue banks through an intricate web of financial institutions and banks controlled by Saudi princes that transferred funds to various armed groups and terrorist organisations across the globe. Helped generously by the Pakistan establishment, the Lashkar-e-Taiba (LeT) established its own legitimate institutions and charities, including a hospital, ambulance services and mobile clinics.

The money nexus among interested players remains terrorism’s strongest driving force. This will have to be broken to take control of terrorism. Guns will never be enough.

The LeT moves counterfeit currencies through hawala and smuggles opium. The prostitution rackets of Hamburg and Berlin were controlled by the Lebanese mafia while the Cologne beat was controlled by the Kurdish Workers’ Party for extortion of the ‘hafta’. The LTTE ran its phone card business in Europe while the IRA ran taxis in Belfast. It was estimated back in 1999 that there was an estimated $1-1.5 trillion worth of criminal money in the global system.

Described by experts like Raymond Baker as Gross Criminal Product, this included illegal capital flight, narcotics trade, smuggling of arms and other goods, human trafficking, counterfeiting and computer crimes. Money laundering of these profits got linked with legal businesses run by armed organisations and charitable aid — described as the New Economy of Terror by Italian political analyst Loretta Napoleoni. Most of this money found its way into the US annually for laundering —till 9/11. Subsequent tightening of US laws diverted this to Europe.

The internet has made things faster and easier and it offers glimpses of how radically our daily lives will change. Today, Saudi and Qatari money, and donations from charities to anti-Assad groups like ISIS have helped create the present mayhem in West Asia. On its own, the ISIS has amassed at least $2 billion through loot and sale of antiques, ransom of journalists and western travellers, smuggled raw materials from Syria, captured oilfields in Syria and black marketed the sale of oil. It now earns $3 million a day from various illegal activities. The money nexus among interested players remains terrorism’s strongest driving force. This will have to be broken to take control of terrorism. Guns will never be enough.

One thought on “Kill funding to kill terrorism”