Kerala-Kashmir-Kabul and the Islamic State 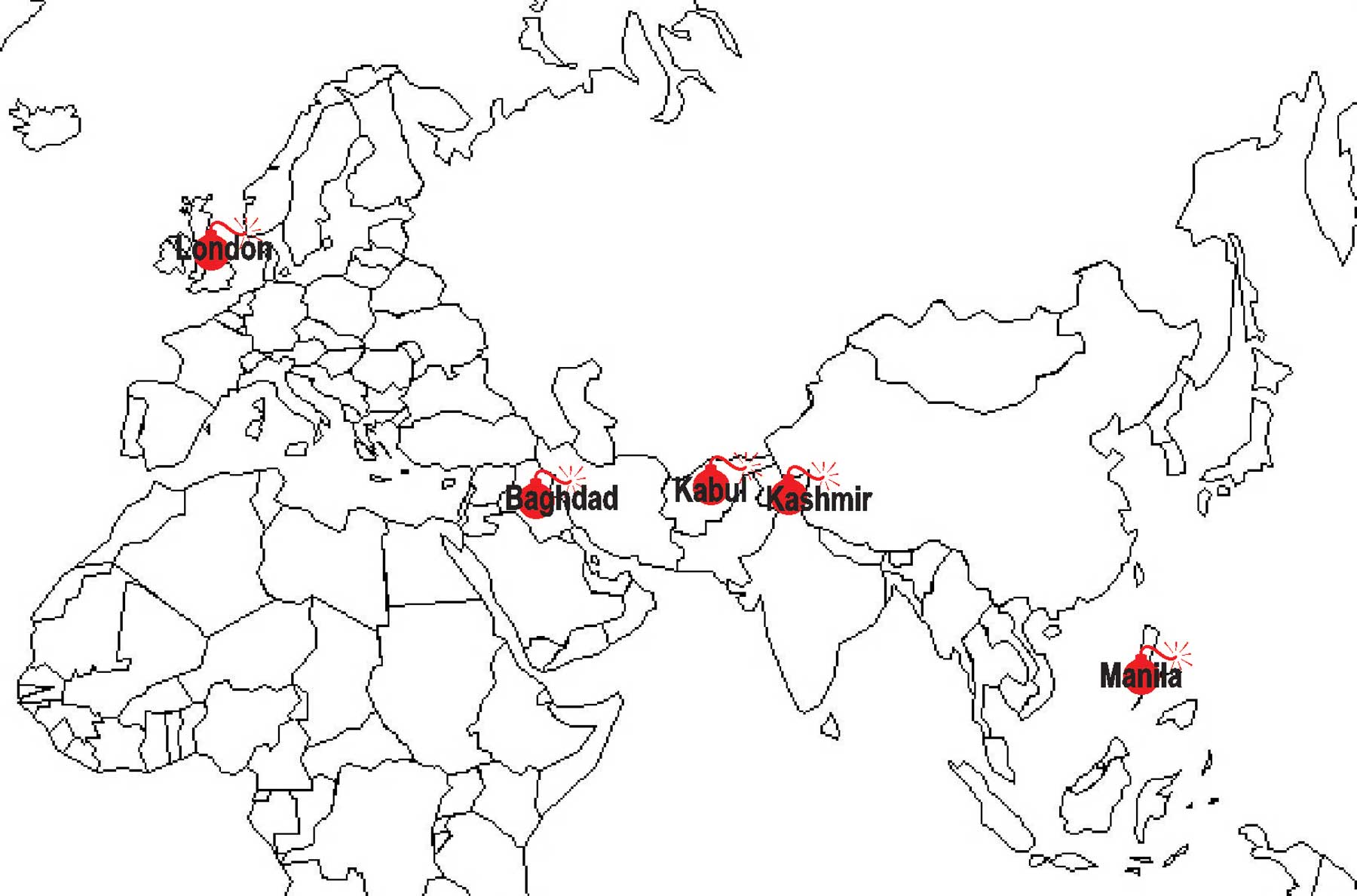 Terrorist attacks during Ramadan in 2017

There is no phenomenon such as ‘local jihad’. Even the jihad in Kashmir is global. All jihadi organizations active in Kashmir are affiliates of Al-Qaeda. The Islamic State is now a reality in the Kashmir Valley. Zakir Musa underscored the phenomenon and he rightly said the fight was not for Kashmir but for Caliphate. He even threatened the Hurriyat leaders of dire consequences if they continued to emphasize on Kashmiriyat or territoriality. He exposed their duplicity by reminding them that on one hand they used the mosques to mobilize the youth, and at same time labeled the problem as a political one. Educated youth from the Valley have begun to join the Islamic State.

There is no phenomenon such as ‘local jihad’. Even the jihad in Kashmir is global. All jihadi organizations active in Kashmir are affiliates of Al-Qaeda. The Islamic State is now a reality in the Kashmir Valley.

One Afsan Pravez of old city of Sri Nagar has recently been deported from Turkey while on his way to joining the Islamic State in Syria. Another youth from Jawahar Nagar, Sri Nagar Adil Fayaz, who was in Australia after completing his MBA made his way to Syria. The denial of Islamic State presence in the Valley can no longer be sustained.

As per a recent report, 23 Keralits have joined the Islamic State in Afghanistan. Their leader Abdul Rashid Abdulla, in an interview has said the following:

“Islamic State is growing faster than you think… Islam spread by the sword… Education in India teaches you to respect nation-state and other religions, these are anti-Islamic… A job helps a secular democratic nation and is therefore un-Islamic… Here in Khorasan we have Pakistanis, Tajiks, Uzbeks, Arabs and Indians – all of us live like brothers… Thanks to internet… a new world has opened to the youth.”

The Khorasan that Abdul Rashid is referring to is actually an area comprising Northeastern Iran, Southern Turkmenistan, Northern Afghanistan, Pakistan and parts of India. This was established in 3rd century AD by the Sasanian dynasty in Iran. In fact, this was the last empire of Iran before advent of Islam. Later after much struggle with the Hindu kings in 7th century AD, the Ummiyad Caliphate was able to assimilate the area. The Wahabi Muslims believe that in the course of establishing the unopposed rule of Islam the first defeat will be inflicted on the non-Muslims in this area. The other concept that the Al-Qaeda or Islamic State subscribe to is Ghazwa-e-Hind (Final Battle of India). This is a prophesized battle, after which the total dominance of Islam would be established. This battle would involve India, Bangladesh and Pakistan. In demographic terms in the present day context, it involves nearly 50 crore Muslims in the three countries or in the Indian subcontinent.

Territorially, we created Bangladesh, but ideologically we have allowed our frontiers to be nibbled by Bangladesh and Pakistan in the name of Ummah and Caliphate.

Rather a queer phenomenon of jihadi suicides by entire family has been witnessed in Bangladesh when confronted with security forces recently. Families in Sylhet, Maulvi Bazar, Dhaka and Barahati exploded themselves to avoid capture, thus taking jihadi militancy to new levels. Such collective suicide bombings have not been experienced in Middle-East and Af-Pak region. The Al-Qaeda (JMB) and its affiliate the Islamic State has become the new role model for Bangladesh jihadis. Mohd Masiruddin alias Mussa was nabbed in Burdwan in July 2016 was interrogated by FBI for his links with the top ISIS leaders of India and Middle-East.

The first post-independence generation of India will have to decide that whether independent India should consider these as inimical ideologies. Can an evolving India afford such counter-pulls or contrary pulls? Can India survive these pulls? Territorially, we created Bangladesh, but ideologically we have allowed our frontiers to be nibbled by Bangladesh and Pakistan in the name of Ummah and Caliphate. In 2007, the Border Security Force of India reported mushrooming of mosques and madrasas along the Indo-Bangladesh border. There were 955 mosques and 156 madrasas in 28 districts on Bangladesh side, most of them within 100-200 meters of the border. According to a recent study, there are 27 times as many madrasas in Pakistan as they were in 1947. In 1947 the number of madrasas were 245, which has now swelled to 8000.

Sheikh Hasina carried out a massive crackdown on jihadi groups including Jamait-e-Islami (JeI), much to the disconcertment of Saudi Arabia. Nevertheless, now she has been seduced by the Saudi money. The Saudis have now again allowed Bangladesh migrant workers in the country. Bangladesh earns $3 billion a year from remittances of workers in Saudi Arabia. This was not without a price. In return Bangladesh has accepted an offer of $1 billion for construction of 550 wahabi mosques (one in every town). This magnitude of proliferation of mosques can be gauged from the fact that in 1980s there was one mosque for every 750 persons and now it is for 550. Since 2009, 50000 mosques have sprung up in Bangladesh taking the total to three lacs. The Qami-madrasas now boost off 14 lac students as against 50 lacs in government madrasas. 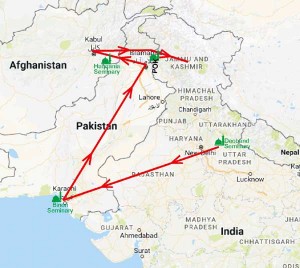 The sub-continental ideological framework of Al-Qaeda or global jihad in the Indian context is best illustrated by the jihadi journey of Asim Umar, the head of Al-Qaeda in Indian Subcontinent (AQIS). Asim was born in Sambhal in Uttar Pradesh, one of the most radicalized areas in India. His first jihadi ideological education was at Darul Uloom Deoband seminary. He then studied the jihadi ideology in Jamia Uloom-ul-Islamia in Karachi, Pakistan, also known as the Binori Mosque. This institution has produced jihadi stalwarts like Mullah Umar, Abdul Aziz (Lal Masjid), Maulana Masood Azhar (JeM) and Fazl-ur-Rahman. In fact, the patriarch of jihad, Saifulla Akhtar was also a product of this institution. He later was also the military advisor to Mullah Umar. It can thus be inferred that the Binori and Haqqani seminaries serve as made feeder institutions not only for jihadi tanzeems in Pakistan, Afghanistan and India but for global jihad as well. This linkage has indeed deep ideological connections with the seminary in Deoband.

Is it not time to decide, as to which brand of Islam should be allowed to impact on India? The Chinese have decided so with regard to their Xinjiang province. Why are we not aggressive about an Indian brand of Islam?

Asim then began to provide jihadi ideological training to jihadists in camps run by Harkat-ul-Mujahideen in POK. He then travelled to Afghanistan and consequent upon his meeting with Osama Bin Laden, he joined Harkat-ul-Jihad al-Islami (HUJI). Finally, for further ideological training he attended Darul Uloom Haqqania in Khyber Pakhtunkhwa. It is from this seminary, that the plot to assassinate Benazir Bhutto was carried out.

Is it not time to decide, as to which brand of Islam should be allowed to impact on India? The Chinese have decided so with regard to their Xinjiang province. Why are we not aggressive about an Indian brand of Islam? Why Muslims in India are shy of even discussing Indonesian brand of Islam?

It is Pakistan’s Zia-ul-Haq who single handedly took Pakistan and subsequently the rest of the Indian subcontinent towards Wahabi/ Salafi Islam to severe roots from Indian moorings. He famously said: “If Iran imbibes Indian culture, it will still remain Iran, but if Pakistan retains Indian traditions, it will over time become India.” If Zia-ul-Haq could build an Arab narrative of Islam, why can’t we do the opposite for the imperative of nation-building.

4 thoughts on “Kerala-Kashmir-Kabul and the Islamic State”